Is there a "female" brain?

A new wave of scientific research is raising an old-fashioned question: Are men's and women's brains different after all? 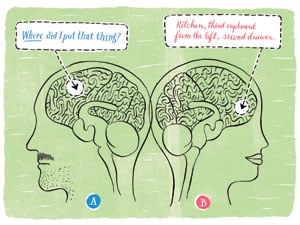 The female brain is back in fashion. It’s the title of a recent, controversial book. It’s an explosive topic among scientists. It’s also an old idea that has whipped up controversy since the mid-1800s, when scientists thought they could prove that female brains were smaller than male ones and therefore women were less intelligent. But after women won the right to vote and later began pouring into the workplace, the pendulum swung the other way. The idea that women’s brains were biologically different actually became taboo, with feminists arguing the only reason men and women act differently is the influence of parents, teachers and society.

Yet scientific mavericks are now resurrecting the idea that men’s and women’s brains are different – both in the way they function and in the impact our hormones have on them. These studies, published in top scientific journals, are so combustible that merely discussing the differences in public led to the 2005 toppling of Harvard University president Lawrence Summers, one of the most powerful figures in academia.

In January 2005, Summers, a former cabinet secretary in the Clinton administration, delivered a provocative speech to an economics conference posing the question, Why are there so few women at the top of math and science? Summers said it was because of differences in “intrinsic aptitude.” In other words, we can’t blame discrimination for women’s lack of progress in higher mathematics and science; the problem lies in nature. At least one prominent scientist walked out of the speech in disgust. The criticism precipitated Summers’s resignation six months later. But he would soon find validation in unlikely places.

In her 2006 book, The Female Brain, neuropsychiatrist Louann Brizendine argued that women are governed by their hormones. It affects our thinking, our urges, our behaviour, the Yale-educated, San Francisco-based scientist observes. Hormones might not affect women’s ability to do math, she says, but they could affect whether women want to spend significant time alone in order to reach the top of the math and science world. “These are value decisions that are actually shaped by hormonal effects on the female brain, compelling connection and communication,” she writes. For a long time, though, women weren’t supposed to talk about how hormones might affect their thinking, she tells me over the phone. “It’s been in the closet for so long.”

But not anymore. In 1975, Brizendine, who teaches at the University of California, started to investigate the impact of hormones after observing women with what she calls “premenstrual brain syndrome.” Some women feel “so jerked around by their hormones on some days that they can’t work or speak to anyone because they will either burst into tears or bite someone’s head off.” Then, she says, as soon as the hormonal tide changes, they return to normal.

So, in 1994, Brizendine founded a mood and hormone clinic. “What we’ve found is that the female brain is so deeply affected by hormones that their influence can be said to create a woman’s reality. They can shape a woman’s values and desires, and tell her, day to day, what’s important.”

The rush of hormones at puberty, for example, explains why teenage girls spend so much time talking with their friends on the phone. “Connecting through talking activates the pleasure centres in a girl’s brain,” she writes. “We’re not talking about a small amount of pleasure. This is huge. It’s a major dopamine and oxytocin rush, which is the biggest, fattest neurological reward you can get outside of an orgasm.”

While Brizendine argues that hormones affect what women feel like doing, other scientists have been building the case that hormones can dictate our brains’ functioning. One of science’s clearest examples of the differences between men’s and women’s brains lies in a test of spatial intelligence, which is the ability to form a mental model of a three-dimensional world and use it to manoeuvre. One such test asks subjects to look at an object, rotate it in their mind and respond to what they see in their mind’s eye. Men are better at this exercise than women, and, significantly, the gap between the genders has not diminished in the past 30 years, despite women’s greater opportunities in education.

Women, on the other hand, perform better on “object location memory,” a spatial-intelligence test that examines the ability to look at a collection of objects on a flat surface and notice if anything has changed. These differences in spatial abilities may influence the ways that men and women navigate: Women tend to use landmarks; men use geographic directions.

So why do these differences exist? Evolutionary psychologists, the intellectual descendants of Darwin, argue that it’s the legacy of our ancestors 50,000 years ago. To survive, men needed a strong sense of direction when they went on hunting expeditions, while women needed a fine sense of any changes in the immediate surroundings to protect their children and home from the wolf lurking outside.

That might sound like a pseudo-scientific justification for keeping women shackled to the hearth. But psychologist Elizabeth Hampson at the University of Western Ontario found links between hormones and spatial intelligence. In 1998, she conducted a study of girls born with congenital adrenal hyperplasia, or CAH, a condition that in female infants can result in masculinized genitalia. Before birth, these girls have been saturated in high levels of androgen, the male hormone. Researchers have found that even after medical attention involving hormones and surgery, CAH girls have better spatial abilities than other girls. “Prenatal androgen levels are almost certainly a major factor in the level of adult spatial ability,” says Doreen Kimura, a renowned psychologist at Simon Fraser University. Research also suggests that females who take hormones to change their gender to male find their spatial abilities improved.

None of this provides incontrovertible proof that hormones alter our spatial intelligence, but, as Kimura writes in her book Sex and Cognition, they “strongly influence” certain spatial and other mental abilities.

Some scientists believe these differences in spatial abilities affect performance in math. David Geary, an evolutionary psychologist at the University of Missouri-Columbia, says the edge boys have in spatial tasks helps them in geometry and in complex, multi-step math problems. The ability to form a mental picture of a math problem also helps boys to succeed on the math part of the SAT test, he says. That may be why boys outnumber girls four to one in the top one per cent of SAT-math performers.

Still, the argument has influential detractors. Harvard psychologist Elizabeth Spelke suggests that even though men and women have different kinds of spatial intelligence, the difference has no impact on their performance in math. According to her analysis of the available research (which she published in American Psychologist in 2005), in tests done from birth to maturity, males and females have the same aptitude for math and science. Women may be less adept at the 3D mental rotation test, she says, but they come up with other strategies to solve math problems. The evidence: Women do just as well as men on challenging university-level math courses. It’s social pressure, not biology, that prevents them from becoming scientists.

Janet Shibley Hyde, a psychologist at the University of Wisconsin-Madison, also argues that men and women are not so different. In an article in American Psychologist in 2005, she reviewed 20 years of psychological literature on gender differences, finding that contrary to pop psychology (see Men Are from Mars, Women Are from Venus and its ilk), men and women are alike on most personal, intellectual and social levels. Although men fare better on some spatial tests and women are better at remembering words than men, the differences, she claims, are subtle. There are exceptions, she notes: Men exhibit signs of aggression differently; they’re better at throwing a ball; and they’re more likely to think about casual sex.

In math, Hyde’s review found that there is no difference between boys and girls in complex problem-solving in elementary and middle school, and only a small difference favouring boys in high school.

“It is time to consider the costs of overinflated claims of gender differences,” Hyde wrote in American Psychologist nine months after Summers’s speech. “One cost to children is that mathematically talented girls may be overlooked by parents and teachers because these adults do not expect to find mathematical talent among girls.”

One of Summersâs most provocative critics is Ben Barres, a neurobiologist at Stanford University. In a July 2006 article in Nature, Barres argued that there is no scientific support for Summersâs idea that women are less able to do math and science â or are less motivated to do so. Like Spelke, he believes that when it comes to challenging math courses, women perform just as well as men. âIf innate intellectual abilities are not to blame for womenâs slow advance in science careers, what is? The foremost factor, I believe, is the societal assumption that women are innately less able than men.â

This could have sounded like an argument that weâve heard before, but Barresâs own story gave it some extra heft. Thatâs because Barres has a unique personal perspective on the gender divide: He is female-to-male transgendered. While he was still a young woman named Barbara studying undergrad math at the Massachusetts Institute of Technology, he recalls, Barres solved a tricky problem that no one else in the class of mostly boys could. The math professor was not impressed and suggested that her boyfriend must have solved the problem for her. And that was only the beginning. âShortly after I changed sex,â Barres writes, âa faculty member was heard to say, âBen Barres gave a great seminar today, but then his work is much better than his sisterâs.ââ (In a sly aside, Barres notes that, as some researchers have shown, his spatial abilities improved after he took testosterone. âAlas,â he says, âit has been to no avail; I still get lost all the time while driving â although I am no longer willing to ask for directions.â)

We’re only seeing the start of a long, heated debate. Until recently, the idea that male and female brains were interchangeable has been so entrenched that it was a scientific religion, writes the Harvard psychologist Steven Pinker, author of The Blank Slate. Anyone who suggests there is something in boys’ biology that makes them resist playing with dolls, for instance, is deemed a scientific heretic. But, as Pinker argues, denying the effect of biology only distorts the study of human beings.

It could also deny us intriguing lines of research. Why, for instance, are women more likely to suffer from depression than men? What can we do to improve girls’ spatial abilities and their interest in higher math? One way to answer these questions is to do something that some critics consider dangerous: explore the biology of the female brain. One way or another, it might clarify why women behave so differently from men. And why should we be afraid of that?