Is it okay to tell your friend you hate her spouse?

I recently spent the afternoon at a friend’s house listening to her talk about her relationship. She definitely needed a pep talk. 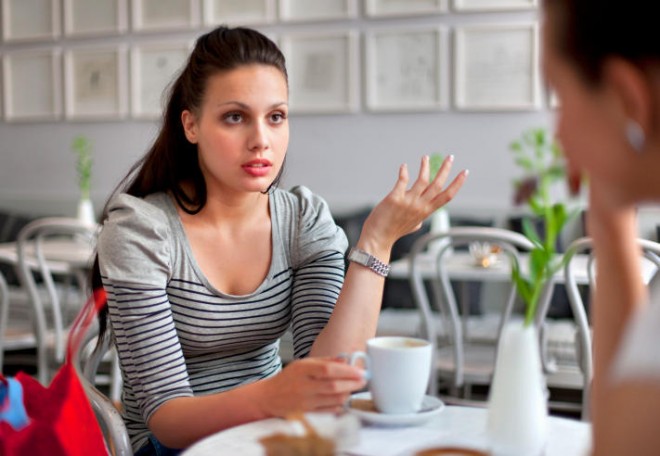 I recently spent the afternoon at a friend’s house listening to her talk about her relationship. She definitely needed a pep talk.

First, when I arrived, I told her she looked fantastic. Her body was sick (as the kids say) and she responded with “That’s because I’m so stressed out about him that I can’t eat.” Okay, she did look great, but who hasn’t been in that position over a guy to be so sick they can’t eat? It’s not a fun way to lose weight.

For the next couple of hours I listened to her relationship woes. I know there are three sides to every story: her side, his side, and the truth. But as I listened to some of the things she told me her boyfriend had said and done to her, it made me seethe with rage.

To be blunt, I hate her boyfriend and I told her so. Yes, I’ve hung out with him a few times. And yes, maybe he’s an okay guy, but at the end of the day, my friend was very upset and they seem to non-stop argue. He may be an okay guy. She’s a great gal. But together? I really think their relationship will end; it’s just a matter of time. In my opinion, she can continue to be miserable for another month, or for four years. And that choice is in her hands.

I was, obviously, pretty blunt with her too. Some of the things she told him, to me, were out of line, and I could see why he would get mad at her for saying those things. But because she is my friend, of course I have her best interests at heart first. I left her house emotionally exhausted, as if I were living in that relationship.

When I got home, my mind was still racing with things I should have said to her, but just couldn’t. She is past the point of even knowing what a good relationship is and is in that state where arguing every day (sometimes all day) is perfectly normal. She is at the state where she thinks this relationship is normal! She says things like, “We had one good day. I feel good.” And I’ll say, “You should be having seven good days a week!”

Then I worried that maybe I was too blunt. Should I really have told her that I didn’t like her boyfriend at all? Would it affect our friendship?

The truth is I’m at an age (and so our my friends) where I don’t want to sugarcoat things. She wants to be in a relationship, but I truly believe that she could be in one, and would be happier, with someone else. But is it my place to say that?

Since everyone has friends, I didn’t turn to just one expert. Here are some tips from a variety of people, whom I asked the very basic question; “Should you tell a friend when you dislike their spouse/boyfriend?”

1. “If you don’t like your friend’s spouse, if it’s early on in the relationship, it’s safe to say something. But if they are in love, or they think they are in love, you can’t say anything. I found that out as proof that when I was getting a divorce — everyone told me they never liked my spouse. But when I was with him, not one of my friends said anything,” said one of my friends.

2. If that person is in love, you can’t say you don’t like them. “They feel like they have to choose between you and them.” If they just met, then it’s safe to give your opinion. “But if they’ve been dating for a while, you’re not in any position to say that,” said my mailman.

3. If they complain to you, and they are obviously coming to cry on your shoulder, then you can give them advice. “You either fix it and go on,” is a good line, suggested my manicurist.

4. If you find they are fighting all the time, and not calling to tell you how much fun they are having, then you can tell them it’s a “sign.” “You should be happy more than bitching,” is a line someone messaged me on Twitter.

5. This next line is from my boyfriend. “A bunch of times I’ve been in that position. I never say anything.” Why, I asked. “They were too far along and I didn’t feel like it was my place to interfere.”

6. If they are coming to you and complaining about the relationship, that gives you a little leeway. “Every situation is a little different. You have to assess it individually,” said my landscaper.

7. Saying you “hate” them is different than saying you “hate the way they treat you,” said an acquaintance in New York whom I caught up with yesterday.

I think, maybe, I spoke too openly to my friend. But she’s still talking to me. She’s still my friend. At the end of the day, I really do just want her to be happy.

How about you? Do you hate your friend’s spouse? If so, do you say anything?