With two hit TV series behind her, Edmonton’s Jill Hennessy is blossoming in new ways. She tells Chatelaine about her latest muses – motherhood and music – and why, at 40, life is better than ever 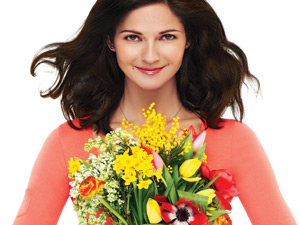 Standing right now in a West Village photo studio in New York, she’s doing the Modern Mom’s Multi-task. Here she is as celebrity and cover model, girl-next-door ravishing in a floor-length Mediterranean peasant dress thrown on for a photo shoot. Here she is as a still-besotted wife, flirting with her husband, Paolo, who smiles back from the corner. Here she is as mother, her adorable toddler, Gianni, hiked out on one hip and her mop-topped five-year-old, Marco, tugging at her other. Here she is as best friend, pointing to the catering table a few feet away and whispering conspiratorially to Marco, “Try the chocolate macaroon, dude.”

Playful and more at ease than she has been in years, Hennessy is flourishing in ways she never expected. After six years in Los Angeles on the hit NBC forensic-pathology drama Crossing Jordan, she and her family are now comfortably settled in New York again, her real home base since leaving Toronto in 1990. No longer a slave to the punishing schedule of series TV, she has been free to stretch other muscles, to immerse herself in motherhood and follow her muse. They feed each other, parenting and creativity. This month, Hennessy returns to the big screen opposite Alec Baldwin, as the frustrated housewife and mother Brenda Bartlett in the affecting early-1980s indie drama Lymelife.

At the same time, she is making a radiant return to music, her first love, as a troubadour, with the folksy Ghost in My Head, which she wrote largely by herself. Inspired, she says, by Marco and recorded when she was pregnant with Gianni, the album – available online this spring – reveals sides and secrets Hennessy has never before shared in public. After the photographer and stylists retreated, Hennessy sat down with Chatelaine while Paolo took the boys home for dinner.

Q: Maybe I shouldn’t ask you this, but it occurs to me you turned 40 last November. Was that a big deal?

A: Not especially. I remember that the first time I asked my mom how old she was, she was 33. So I always pictured adult women as 33. When I hit that age, it was like, Oh, jeez, oh my gosh, I guess I have to be an adult now.

A: I’m really enjoying the whole day-to-day of having two kids. I didn’t know how I’d react with not doing the acting thing every day.

Q: Because what we do for a living becomes so much a part of our self-identity?

A: Yeah, exactly. And it’s your creative output. I wondered, If I’m not doing that on a day-to-day basis, am I going to become depressed? Am I going to start to feel that I’m no longer viable as a human being? And it’s amazing: I look forward to taking my son to school on our scooter and doing class things with him and saying hi to the other kids and hanging out with the other moms, getting a coffee after drop-off.

Q: It all sounds so placid and domestic. But Paolo and I were talking during your photo session, and he mentioned that the album is very autobiographical. It deals with some tough times. Can you tell me about the title track, “Ghost in My Head”?

A: The trigger incident for that song was dealing with a huge loss, with death.

Q: Are both of your parents still alive?

A: Yeah. The song was about knowing that you have to accept death but really not wanting to, and trying to sort of fend off the acceptance of it for as long as possible. The song is literally about a walk I took in Washington Square Park at four in the morning a couple of days before Christmas one year. It was bitterly cold, and I was just walking around the block to [the drugstore] Duane Reade, trying not to think about something I needed to accept but didn’t want to. I bought a music book. I think I got a tube of lip gloss. There was such a nice guy behind the counter, and I was just so grateful for that. I wrote the song in that book, and that led to all these other songs. A lot of them were dealing with my childhood, with my sister and me, my brother.

Q: Did you guys have a tough time of it? You’ve mentioned your parents separated when you were young.

A: I have memories of feeling very alone, which is reflected in a lot of the imagery of the songs. There’s the prairie wind of Edmonton, staying in the art class way too late because you don’t know if your parents are going to be home or not when you get there. And the sun goes down so early in winter, your feet are wet, you’re freezing, it’s dark, and you’re not necessarily looking forward to where you’re going.

Q: Your character in Lymelife, Brenda, is also feeling very lonesome from being ignored by her philandering husband. People have compared the film to The Squid and the Whale.

A: I love that film, because sometimes things get ugly in families, man, really ugly. Where there’s love, there’s anger, and then sometimes there’s a lot of really ugly crap that we don’t want to see and that kids really shouldn’t see. But unfortunately sometimes they do.

Q: At one point, Brenda reacts to the humiliation by going out on the roof to smoke a cigarette in the middle of November, wearing just a bikini top and jean shorts because she’s hoping to attract her husband’s attention. You filmed the scene only three months after giving birth to Gianni. Was that a little difficult? Do you have any body issues?

A: I realized a long time ago that I’m always gonna feel like something’s not right – I don’t like my legs or I don’t like my knees, or my face or my hands. I know myself well enough to know that I will always find fault with something, which is kind of freeing, actually.

Q: Brenda also reacts to the turmoil by trying to hold on tighter to her children, especially her younger teenaged son, played by Rory Culkin, who she’s terrified will be bitten by a tick and catch Lyme disease.

A: Her husband doesn’t find her attractive, her younger son barely talks to her, she misses her older son, who’s gone off with the army, and she’s retreated into this arena: Okay, I can control cleaning the house, I can control what I cook, I can control what my kid wears to school, what he’s gonna wear to his confirmation. She fixates on those things.

Q: What was the seed of your connection to the character?

A: This sounds weird, but I just had a flash as I was talking about her fixating on things: I remember making peanut-butter-and-jelly sandwiches for my brother when he was seven or eight, and I was 13 or 14. My parents were separated –

Q: Wait, are you going to make me cry?

A: No, I won’t. My parents separated when I was 12 or 13, and for some reason I got it into my mind that if I could just make the best peanut-butter-and-jelly sandwich, I could raise my brother, take care of him and I could compensate for everything he wasn’t getting. I’d slather on the peanut butter – even put butter on before the peanut butter! And I remember how much that meant to me. There was something about that feeling that reminded me of this character.

Q: Divorce is so hard on kids. Sometimes it takes a while for children to realize that their parents have their own challenges, that they’re human beings, too. Sometimes it only happens when you become a parent yourself.

A: I’m constantly reminded of what both of my parents gave me, despite everything they went through. I’m so lucky that my mom taught me to appreciate the creative part of myself, and that my father helped to support me, because I know a lot of parents wouldn’t have done that. A child never realizes the surrounding incidents or situations that influence their parents. Now, in retrospect, I’m actually even more impressed by both of my parents, by just how brilliant they are as human beings. It’s such a wild roller coaster, huh?

A: Working on this album has just given me so much hope, and when I say that, I’m not talking in terms of financial benefits, because I can’t really expect anything in that way. But it’s been such an exciting trip that I feel so energized, so excited and so forward-thinking. So much more so than I’ve ever felt in my life.