I still count on my fingers, so how can I possibly help my daughter with her math homework? 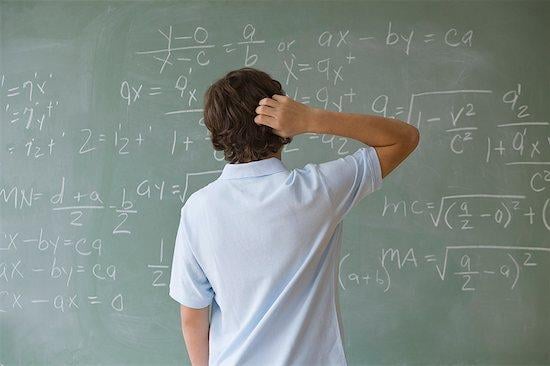 I didn’t like almost failing math the first go around in high school. And guess what? I feel like I’m failing math all over again. But, this time, I’m failing GRADE TWO math, which is worse than failing grade 10 math.

I was so bad at math in high school that my parents hired me a tutor, just so I could pass the mandatory math class. As a grade-A student in pretty much every other subject, failing math depressed the crap out of me. Plus I hated math. I thought, like acne, I would never have to go through math again after high school. Honestly, I’m still traumatized from high school math tests.

BUT OH HOW WRONG I WAS! It turns out YOU do need math later in life. You need math to help your children with THEIR homework. My daughter now comes home with math homework almost nightly. When I say she can subtract three-digit numbers quicker than I can, I’m not lying.

I am an active parent when it comes to homework. I don’t really like spending my nights (or early mornings) making sure my daughter does her homework, but I do it, because homework is important and teaches responsibility.

But I realized I was in BIG trouble after my daughter finished her math homework the other night and asked me to check it.

“Wrong!” I said, looking at one of the questions and her answers. But then I looked closer. “Wait. Let me see. Oh, I’M wrong. You were right.” And my daughter was right. It took me longer to check to see if her answers were right, than it took her to actually answer all the math questions, which she all got correct. (Sadly, I had to pull out the calculator to check.)

This is awful, but I still count on my FINGERS, so you can see why I’m worried for MY future. Because adding and subtracting is one thing, but I know what comes next: multiplication and fractions. And, here we go again. I’m going to feel like a failure at math again and I’m not even a student anymore.

It is true that I haven’t needed to use math much as an adult (except for figuring out tips), but I think it would be really nice if my daughter wasn’t terrified of math like I am. That’s right. I’m TERRIFIED of math. Now, I suppose I could go back to grade two and start learning math again, but instead I called Sarah Bartram of Mostly Math, who has been a math tutor for two decades (that’s 20 years! HA! I’m not THAT bad at math) for advice for us parents who suck at math and have to relive it, thanks to our offspring.

1. A lot of parents who send their children to see her, she says, suffer from “mathphobia.” “Everyone is afraid of math and people think it’s okay. They think, ‘Hey, so you’re not good at grade two math, no problem. But if you said that about English, they’d think you’re crazy.” She’s right. I wouldn’t allow my daughter to get away with not doing well in English, so why am I even thinking that math doesn’t matter as much.

2. She says parents who suffer from “mathphobia” should hide it from their children. “They’ll pick up on it. Just because you are scared of math doesn’t mean your child should be.” She’s right again. I’m going to make myself stop sighing and moaning, “Math! Not again.” I DO NOT want my daughter to have a mathphobia like her mommy.

3. On the Internet, she suggests two math programs, one called Kumon, and another called Jump Math, both of which give examples to parents to help them help their children. “It’s never too early to get them to know the basics.” (And maybe it’s never too late to learn the basics?)

4. As the math gets harder, as my daughter gets older, she does suggest getting a tutor if I don’t understand the questions. “You have to find the right tutor,” she says. That means, a tutor who enjoys teaching, likes math, and is patient. Former teachers are a good bet.

5. Bartram advises that parents shouldn’t be too hard on themselves for sucking at math, even at the elementary level. “It’s all about memorization. If you haven’t used those skills in years, then it’s not going to be at the front of your brain. So it’s understandable that parents find it intimidating.”

6. Parents, like me, should stop moaning about math and stop asking questions like, “Well, when was the last time I used calculus?” “Yes, you aren’t going to use calculus every day, but you do want to know how to tip, if you’re being ripped off or if you’re getting the right change. It really helps with logistical thinking and problem solving,” she says.

So, tomorrow, when my daughter brings home math homework, I’m going to plaster a smile on my face and pretend I’m having the time of my life. After all, I do want her to be good at math, not scared of math. I want her to get a gold star on her tests. (And, let’s be honest, being good at math DOES open more doors in the future.) And since I at least try and help her, her gold star is my gold star too. And who doesn’t like getting a gold star? And I’m also going to start saving for a math tutor. Because I know, by grade four, I’ll definitely be screwed. Are you like me? Would you fail  grade two math?