Cheating has never been more tempting — so what's a couple to do?

Infidelity is common but it may not be the greatest betrayal in a marriage. 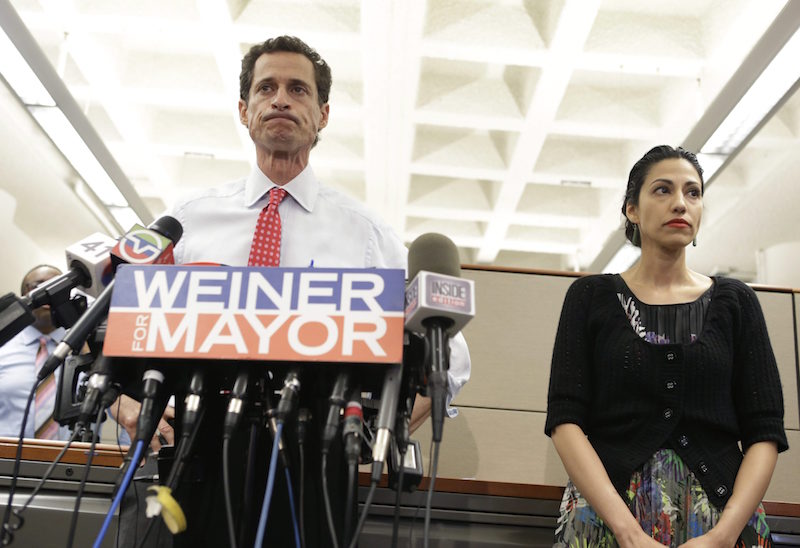 The most fascinating character in the recent documentary Weiner is not Anthony Weiner, the former U.S. politician and inveterate sexter who gives the film its title. It’s his wife, Huma Abedin, who you can’t keep your eyes off of. Throughout her husband’s dick-pic scandals Abedin has been described as enigmatic and inscrutable. She’d much prefer to be the political staffer at the back of the room (she’s a longtime aide to Hillary Clinton), than the public figure at the microphone — but her emotions are hardly cryptic. Her hurt, embarrassment, frustration, fatigue and anger are palpable in the film. In fact the only mysteries in the documentary are what Abedin saw in Weiner in the first place and when, in god’s name, she would leave him.

At least now we know the answer to the second question. Following the weekend’s revelation that Weiner has been trading sexually explicit texts with yet another woman, Abedin announced the couple had separated. Whatever had drawn her to him, whatever negotiations and agreements the couple had made in private, whatever had maintained their marital bond, is over. Both die-hard marriage traditionalists and anything-goes swingers can agree: Abedin is better off without him.

Commentators and political watchers have speculated what Weiner’s actions say about Clinton’s presidential campaign. (Short answer: Nothing.) What’s far more interesting is the insight Abedin and Weiner’s situation might offer on the state of modern marriage and infidelity. To be sure, few relationships and break-ups create this much media attention and late night TV comedy fodder, but Abedin and Weiner might be more like the rest us than we’d wish to think.

To put Weiner’s behaviour in context: While reliable statistics on infidelity are difficult to come by, anecdotal evidence suggests that a significant number of attached people have had experiences somewhere on the cheating spectrum — from fantasies, flirting and emotional affairs all the way to actual, real-life extramarital sex.

One of the smartest, sanest thinkers on this subject is therapist Esther Perel, author of the bestselling book Mating in Captivity, whose research focuses on intimacy and marriage. She says our unrealistic expectations can doom relationships. As she put it in a wildly popular TED Talk, “Because of this romantic ideal, we are relying on our partner’s fidelity with a unique fervour. But we also have never been more inclined to stray, and not because we have new desires today, but because we live in an era where we feel that we are entitled to pursue our desires, because this is the culture where I deserve to be happy.”

Perel feels that we’d actually be a lot happier and have better, healthier relationships if we were more honest about our needs, and more rational about what our partners can and should provide. And while she doesn’t advise cheating, she does say that it shouldn’t inevitably be a death knell for a partnership. Contentedly married people do and will cheat, she says. And lots of marriages not only survive affairs but become stronger in their aftermath.

Similarly, sex columnist Dan Savage has made the case for being “monogamish” — that is, allowing for, or forgiving, the occasional infidelity provided the spouses are safe, honest and discreet. It’s not for everyone, and Savage doesn’t suggest that it should be. But the bigger takeaway is this: If we want marriages that endure and satisfy us in the long haul, we need to rethink sexual exclusivity as a virtue above all others.

None of which is to say that Abedin should have stayed with Weiner — he really does seem like a narcissistic, selfish tool. It’s to argue that it’s possible that the final straw for the deeply private Abedin wasn’t Weiner’s straying per se, but rather that his carelessness and recklessness put it on the front pages. The betrayal, in other words, might not have been the extramarital hijinks but rather the highly public embarrassment. Maybe instead of spending so much time with his smartphone, Weiner should have been heeding Perel: “It’s never been easier to cheat,” she says, “and it’s never been more difficult to keep a secret.”

More from Rachel Giese:
Frank discussions about abortion are rare in Canada — they shouldn’t be
Diver’s Olympic win upstaged by her boyfriend’s marriage proposal
Women are absolutely crushing the Rio Olympics — and it’s a thrill to watch