In today’s news: the problem with Google Recipe Search; men will pay for dates with pretty ladies; Berlusconi calls Clooney as witness; why breakups hurt; and the disturbing rise of eating disorders in older women. 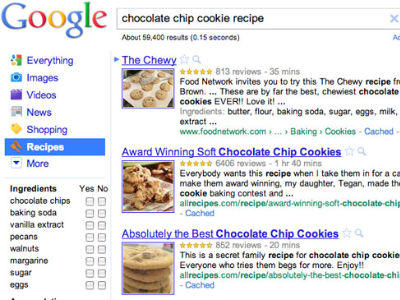 We were super excited when Google announced their recipe search feature back in February. It allows you to refine your recipe searches by ingredient, cooking time, and calories, and is used by some one billion people each month. Sounds great, right? Not so, says an article on the food blog food52. Apparently, Google recipe search favours recipes that contain specific key words and data. Larger recipe sites with major resources can exploit these algorithms through search engine optimization. The end result is that recipes from massive sites like Allrecipes.com and Food.com are more likely to appear in searches than recipes from smaller but perhaps better websites. For more on how Google recipe search is affecting the way we cook, click here.

A new study published in the Journal of Evolutionary Psychology has found that men are more likely to pay for a date when they think the woman they are with is more attractive than them. That’s right, dudes will pay for hot ladies! Thank you, science, for spelling out an annoyingly truth we were all happy to ignore.

Italian Prime Minister Silvio Berlusconi has named actor George Clooney as a defense witness in his upcoming trial. The politician stands accused of sleeping with an underage prostitute. Berlusconi says Clooney and his partner, Italian actress Elisabetta Canalis were guests at one of Berlusconi’s now infamous “Bunga Bunga” parties. Canalis denies ever attending the party, and Clooney had this to say about the controversy-addled politician’s claims: “It seems odd since I’ve only met Berlusconi once and that was in an attempt to get aid into Darfur.”

If you’ve ever suffered a bad breakup, you likely know that sometimes the emotional pain can be so intense, it feels almost physical. Now, a new study has found that sometimes the pain caused by emotional rejection actually is physical. Researchers found that when a person feels rejected by someone they love, it activates the same region of the brain that controls physical pain. It turns out the Everly Brothers were right: love hurts.