Bradley Cooper talks about his two new films, getting his heart broken, being named one of People magazine's sexiest men, and the craziest thing he’s ever said “yes” to 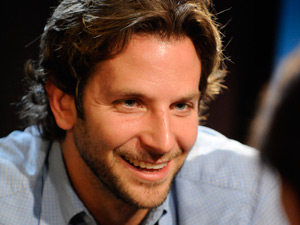 Q: One of your first on-camera jobs was as the host of an adventure travel show. What was that like?
A: I was the world’s worst host. It was a British company that produced the show and when the head of the company came to New York and we went for dinner I remember trying to talk him out of firing me. Talking into a camera…I was the worst at it. When we’d do the treks you’d do something like climb a hill and if they didn’t get the shot you’d have to reenact it. I’d be winded, then I’d be rested and I’d have to act winded again. I was always really bad at that too – which is odd because I’m an actor, you’d think I’d be able to do that. But I sucked. I loved doing it though. We got to travel all over the world. We went to Croatia, the Arctic Circle and Peru. It was incredible. I wound up working on this for two years. I was still in grad school at the time so I’d do it in the summer time and on breaks at Thanksgiving and Easter.

Q: When did your big break come?
A: I met J.J. Abrams in New York after I graduated school and he hired me to do the television show Alias, which shot in Los Angeles, so I had to move to Los Angeles. That was a pretty big break and then David Dobkin hired me to play a role in Wedding Crashers and that was also a big break.

Q: Your new movie Yes Man is all about saying “yes” to life’s possibilities. Do you think this is an important philosophy to live by?
A: I do. When I was in the middle of watching the movie I turned to my buddy and said, ‘God this movie is getting to me.’ The message is sweet and simple and very relevant right now. When Zooey Deschanel’s character talked about the routine of life being so boring I thought, yeah, when I have a free day I just do the same thing. I love ritual, but it would be nice to engage more. I love the idea of going to an airport and getting on the first flight out.

Q: What is your day-to-day routine?
A: I’m such a morning person. I get up at the crack of dawn, grab my two dogs and go running. It’s pretty boring but I get really excited to do it.

Q: What’s the craziest thing you’ve ever said “yes” to?
A: I’ll eat just about anything. I once ate a guinea pig. We killed it and then ate it in front of its family. It was pretty insane. You could hear the other guinea pigs while you were eating. But I was in Peru and I had to eat it.

Q: You’re also in He’s Just Not That Into You, which is coming out in February 2009. Who is your character in that movie?
A: I really liked that character a lot. When I read the script I thought, ‘He’s so complicated.’ It’s easy to write him off because he’s an adulterer. It can be hard to develop that type of character into someone people can relate to. I just found him very flawed and it was very fascinating to play. I got to play this person with Jennifer Connelly and Scarlett Johannson, who are so talented. They made my job so easy.

Q: Have you ever been dumped by someone who wasn’t that into you?
A: I remember a girl broke my heart once and I cried for a week. It was like a bad movie. I was calling ex-girlfriends crying to them and calling my mother. I’d go running every morning crying. I was amazed at how much I could cry. Then after a week – done. It was completely out of my system. Everybody needs to have their heart broken. It builds character.

Q: So many of your movies have had all-star casts. Is there anyone you were star-struck by?
A: Absolutely. The first time was probably with Christopher Walken. That was pretty amazing. But I also did a play with Julia Roberts and that was insane. I’ve worked with some crazy people. But after two minutes it sort of goes away. But then every day it’s almost kind of like Groundhog Day; you forget and it gives you this energy to be working with these people that you’ve seen since you were a kid. I’d get used to Jim Carrey then I’d show up the next day and I’d see him and I’d say “Oh my God, it’s Jim Carrey.”

Q: You’ve been named among People magazine’s sexiest men. Did that affect your social life?
A: Only in the sense that my friends would call me to make fun of me for it.

Q: There were rumours last year that you were dating Cameron Diaz. Can you comment on that?
A: She’s just a really good friend. She’s awesome.

Q: Most people probably assume you have a dream job right now, but is it sometimes a pain to be in the spotlight?
A: Not at all. My life is completely normal. There’s no difference between now and when I was in college. I’m very lucky. I’m able to work a lot and I have complete anonymity.

Q: So you don’t ever wish you were back filming travel shows and touring around the world?
A: I loved doing that but I’d like to do it where I’m not filming a television show. I love acting and I get to travel when I’m acting so it’s sort of a best case scenario.