This year's Golden Globes were undeniably different, but the show did go on. Here’s what you missed—including several sweet moments and significant wins, as well as a resounding call for inclusivity. 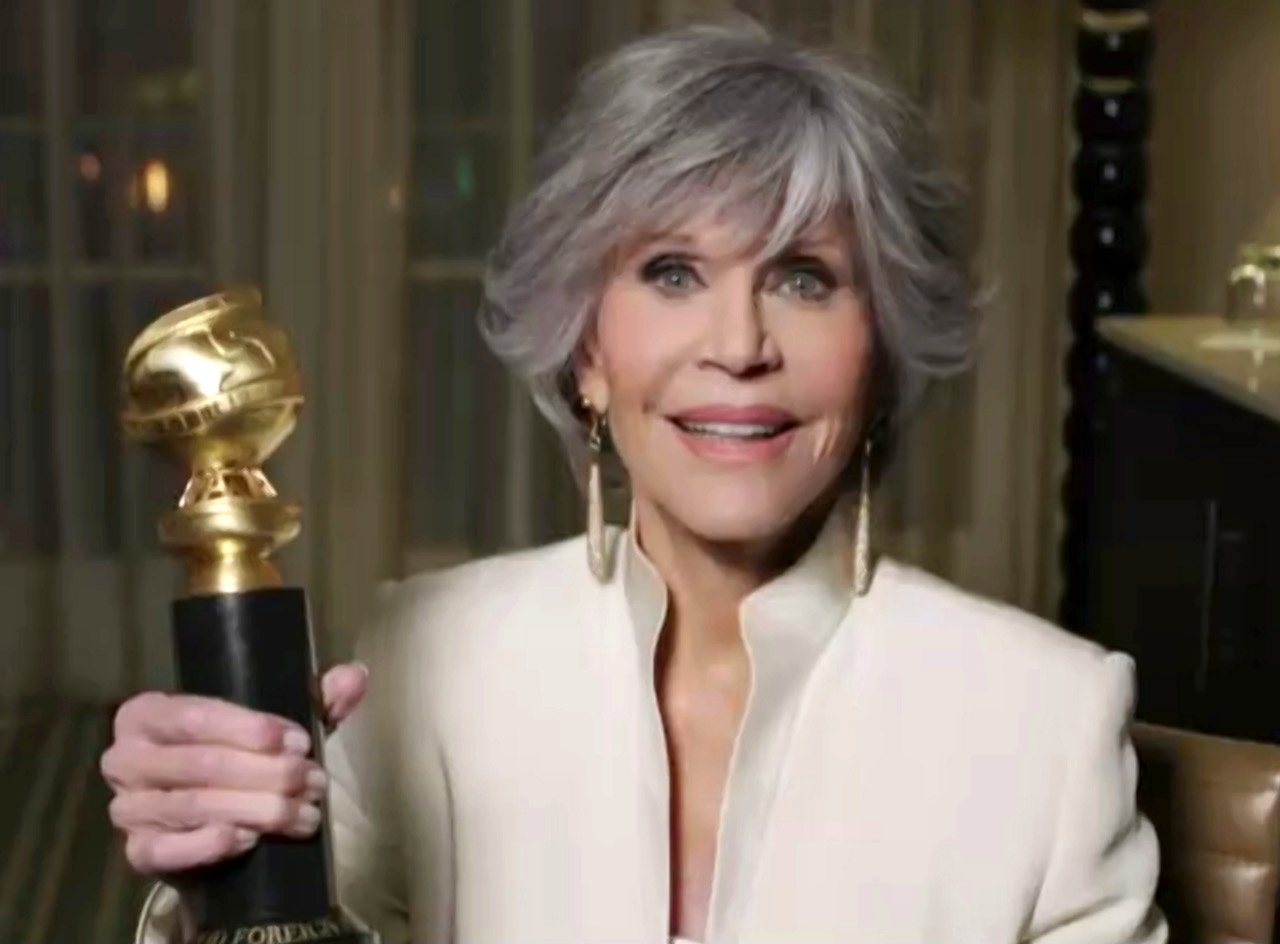 (Photo by Handout/HFPA via Getty Images)

The 78th annual Golden Globes was truly like no other—and yet, so much of the show, and many of its issues, felt the same.

Due to the pandemic, this year’s Globes were telecast live with co-hosts Amy Poehler in Los Angeles and Tina Fey in New York. Instead of the typical ballroom packed with celebs chatting and drinking together, nominees tuned in from their couches, just like the rest of us. Live presenters, including Gal Gadot, Salma Hayek and Margot Robbie, took the stage at either The Rainbow Room in New York or the Beverly Hilton Hotel in L.A. and spoke in front of a smaller, socially distanced and masked audience of first responders and frontline workers. In place of candid celebrity shots, we saw stars interacting on what was basically a fancy version of Zoom, complete with audio glitches and delays.

As Fey said in the opening monologue, “Could this have been an email?” The answer is yes, but since it was a three-hour live event instead, here’s everything you need to know.

The Golden Globes have long faced criticisms for the lack of diversity in its nominees as well as scrutiny surrounding the Hollywood Foreign Press Association (HFPA) members who determine the winners, and those questions intensified this year thanks to a deeply-reported exposé from the Los Angeles Times. The investigation revealed that among its 87 members, there are zero (ZERO!) Black members of the HFPA, and there haven’t been for two decades.

Fey and Poehler somewhat addressed the elephant in the room in their monologue, with Fey defining the HFPA as a group of “around 90 international—no Black journalists—who attend movie junkets each year.” Poehler added that “everyone is understandably upset at the HFPA and their choices,” particularly with a number of Black actors and Black-led projects being overlooked, such as Michaela Coel’s I May Destroy You and several categories featuring no people of colour.

“We all know that awards shows are stupid. The point is even with stupid things, inclusivity is important, and there are no Black members of the Hollywood Foreign Press,” said Fey, adding. “You got to change that. So, here’s to changing that.”

Three members of the HFPA later took the stage and made a statement recognizing that “we must have Black journalists in our organization” and pledging to work towards “a more inclusive future”—though gave no details about what that actually means or when these changes will happen.

It should also be noted that in addition to questioning the makeup of the HFPA, the Times investigation presented evidence of members being influenced by PR executives and studios, such the 30 HFPA members that were treated to a glamorous (and expensive!) press junket for Emily in Paris, which received two highly contentious nominations this year. These allegations were not addressed during the show.

It’s no small feat to put on a live award show, with celebrities streaming in from all over the world, co-hosts located across the country and an audience that, by this point, has chronic Zoom exhaustion. With that in mind, there were moments of the Globes broadcast that were impressive, like the coordinated monologue that put Fey and Poehler side-by-side and at one point, seemingly had Fey reach across the cross-country divide.

But there were more than a few tech issues, including sound glitches, freezing and delays—the most cringeworthy of which was the moment Daniel Kaluuya, who won a best supporting actor trophy for Judas and the Black Messiah, nearly didn’t get to make his acceptance speech because his audio wasn’t connecting.

Stars celebrating with their loved ones

“I prayed!” said Minari writer-director Lee Isaac Chung’s young daughter, her arms wrapped around him in a tight embrace, when Minari won for best foreign language film. Reader, I cried.

It’s pretty common for Golden Globe winners to thank their loved ones, but rarely do we actually get to see those families cheering them on—until this year. When Catherine O’Hara won for best actress in a TV series, musical or comedy for her role in Schitt’s Creek, her husband Bo Welch attempted to replicate the live award show feel by playing music to cut off her acceptance speech. When Mark Ruffalo won best actor for his role in the TV miniseries I Know this Much is True, his kids excitedly rushed into the shot, patting his shoulders in congratulations. A genuinely shocked Jodie Foster was able to kiss and thank her wife, Alexandra Hedison, during her acceptance speech for best actress in a supporting role in a motion picture for The Mauritanian. Oh, and both of them were wearing (incredibly chic) PJs and snuggling their absolutely adorable pup Ziggy. Truly, relationship goals.

We got to see celebs dressed up, but also very dressed down

Don’t get me wrong, there were some incredible outfits. I Care a Lot’s Rosamund Pike went big and bold in a dramatic red tulle dress, This is Us’ Susan Kelechi Watson presented in a walking waterfall of tassels and Dan Levy was a literal piece of sunshine in an electric yellow suit. But there were a few stars who opted for comfort, and I was here for it.

Social media users gushed over Jeff Daniels channelling full grandpa energy in his flannel button down. Ted Lasso’s Jason Sudeikis accepted the Golden Globe for best actor in a TV series, musical or comedy wearing a tie-die hoodie from his sister’s dance studio. And possibly my favourite casual look was from Nomadland’s Chloé Zhao, who sported a green sweater with small yellow flowers and raised her green mug in celebration when she won for best director. Truly relatable content.

Speaking of Zhao, the filmmaker made history with not one but two Golden Globe wins for Nomadland, a drama about a woman named Fern—played by Frances McDormand—who embarks on a nomadic, van-dwelling lifestyle as a result of the Great Recession. Zhao’s win for best director marked only the second time a woman has won in that category, and the first woman of Asian descent, in the history of the Golden Globes. The first and only other woman who has won for best director is Barbara Streisand, who took home a Golden Globe for Yentl in 1983. Let that sink in.

Zhao looked genuinely surprised when she was called to the mic—or rather screen—a second time when Nomadland took home the night’s top honour, best motion picture, drama, beating out Mank, The Father, The Trial of the Chicago 7 and Promising Young Woman.

A big win for Schitt’s Creek

After absolutely cleaning up at the 2020 Emmy Awards, becoming the most-awarded comedy in a single year, Canadian series Schitt’s Creek had five Golden Globe nominations and walked away with two big wins. Catherine O’Hara took home the prize for best actress in a TV musical or comedy (which she unfortunately did not accept in character as Moira Rose). The show went on to win best TV series, in the comedy or musical category, which Dan Levy accepted with a nod to Schitt’s Canadian roots and an important reminder.

“This acknowledgement is a lovely vote of confidence in the messages Schitt’s Creek has come to stand for: the idea that inclusion can bring about growth and love to a community,” said Levy. “In the spirit of inclusion, I hope that this time next year, the ceremony reflects the true breadth and diversity of the film and television being made today because there is so much more to be celebrated.”

An outpouring of love for Chadwick Boseman

There was a clip early on in the award show where TikTok star La’Ron Hines tested kids on their Golden Globes knowledge. They did not know who or what the HFPA is, but they immediately recognized one name: Chadwick Boseman, the Black Panther and a true hero.

Boseman passed away last August at age 43 after a lengthy, and quiet, battle with colon cancer. His last performance was as trumpeter Levee Green in Ma Rainey’s Black Bottom, a role that earned him a posthumous Golden Globe nomination for best performance by an actor in a motion picture, drama. The moment he was announced as winner was heart-wrenching.

Holding back tears, Boseman’s wife Taylor Simone Ledward accepted on his behalf with a beautiful tribute to her late husband’s work and legacy.

“He would say something beautiful, something inspiring, something that would amplify the little voice inside of all of us that tells you you can, that tells you to keep going, that calls you back to what you are meant to be doing in this moment in history,” she said.

The incomparable Jane Fonda, whose career in Hollywood spans six decades, was awarded the Cecil B. Demille Award for outstanding contributions to the world of entertainment. As a long-time activist, Fonda used her time at the mic to bring attention to the glaring lack of diversity in the HFPA’s ranks and the importance of inclusivity in the industry.

Fonda specifically spoke about the power of movies and series like Minari, Judas and the Black Messiah and notable Golden Globes snub I May Destroy You, for understanding the stories of different communities and people. “Stories, they really can change people. But there’s a story we’ve been afraid to see and hear about ourselves in this industry—the story about which voices we respect and elevate, and which we tune out; a story about who is offered a seat at the table and who is kept out of the rooms where decisions are made,” she said, encouraging those listening to actively be more inclusive everywhere, from hiring to award shows.

“I mean, doing this simply means acknowledging what’s true. Being in step with the emerging diversity that’s happening because of all those who marched and fought in the past and those who’ve picked up the baton today. After all, art has always been not just in step with history, but has led the way.”