Ms Chatelaine for the month of September, co-host of BC Morning News, looks forward to reporting the news at 5:30am each day 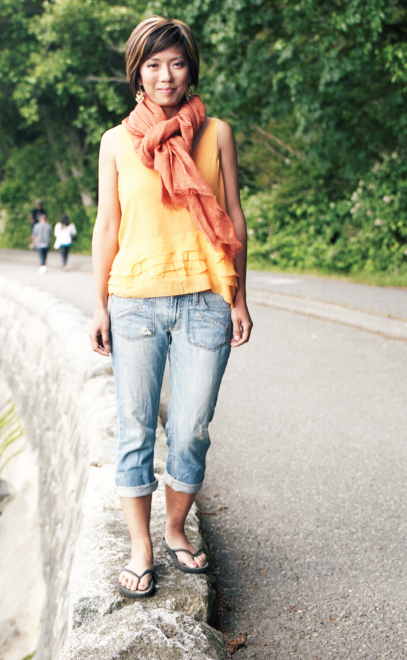 Down-to-earth Vancouver native Sophie Lui has been delivering the news for 12 years, but originally she had her sights set elsewhere. “I wanted to write for Rolling Stone,” she says, “and I figured getting into radio was the best way to break into that world .” But after getting a diploma in broadcast radio at the British Columbia Institute of Technology, she discovered an affinity for current events that she credits to her news-junkie parents: “We watched a lot of CBC growing up.”

Sophie acknowledges that good fortune has played a large part in her career. “You need determination and energy, but you also need luck—it’s a lot about being in the right place at the right time.” For instance, she was interning at a Kelowna radio station and landed a job while picking her roommate up from a competing station. “The news director happened to be there and said, ‘Hey, do you want a job?’ I’d walked into his newsroom right when he needed someone.” About four years later, a casual coffee with another news director in Victoria led to her first TV role: “He was reluctant to consider me because I didn’t have experience, but somehow I convinced him!” she says.

Then, after seven years working in TV, she took a risk and put her career on hold to travel to England, Scotland, Egypt, Dubai, Jordan, Israel, India and Southeast Asia . “I am really proud of myself for doing what I wanted to do,” she says. On her return, she scored a position at Global Television in Vancouver, where she was promoted to morning-news co-anchor last September .

Sophie’s job makes for an unconventional schedule: She sets her alarm for 2:30 a.m. (but presses snooze twice before getting out of bed) and arrives at the office at 4. Then she reads her script, as well as headlines, newspapers and websites like Gawker, to prepare for onscreen banter with her co-host, Steve Darling. She’s on air from 5:30 to 9 a.m. and home again by 1 p.m., where she naps for an hour or two before dinner at 5.

When Sophie’s not reporting on human-interest stories, she’s busy being a part of them: She makes up to six public appearances every month. “You develop relationships with non-profits,” she says. “I have a hard time saying no to something I think is important.” One cause that’s close to her heart is HIV and AIDS awareness, for which Sophie has become an advocate. “It sounds corny, but I don’t like to see people treated differently,” she says. “There’s been a progression in research, and in our attitudes toward HIV and AIDS, but it’s still easier for people to talk about other diseases. There’s so much misunderstanding about it.”

Sophie often ditches her self-imposed 10 p.m. curfew to emcee fundraisers for various causes, although she pays the price the next day. Ironically, she’s not a morning person. “When I was a teenager, my brother had to walk into my bedroom to turn o my alarm. Generally when I wake up, the first thing I think about is when I’ll be able to sleep next.” Now that we’ve seen her in action, that’s news to us.

I define downtime as…going out for dinner and having a drink, and going to the spa — especially the Scandinave Spa in Whistler.

The last time I lost my temper was…during the hockey riot. I was angry that people would do that.

I wish I was better at…doing my expenses.

I wake up in the middle of the night thinking about…an interview I have to do the next day. If it’s a big one, I get anxious about it until it’s actually happened.

My Jeep TJ: “This is my second Jeep. I love having the top down and feeling every bump in the road.”

Potato chips: “Old Dutch Bar B-Q — the original flavour that came in a box! In general, I like deep-fried potatoes.”

Hangelier: “It was made by a couple of Vancouver architects from repurposed hangers and bicycle gear. It casts a really cool light at night.”
Kiehl’s Ultra facial cream
“My face feels parched without it.”