Take a cue from Hillary Clinton and stand up, be heard

The fight isn't over, let alone won – and heavy hitters Hillary Clinton, Oprah and Angelina Joie are helping to reignite the women's movement. 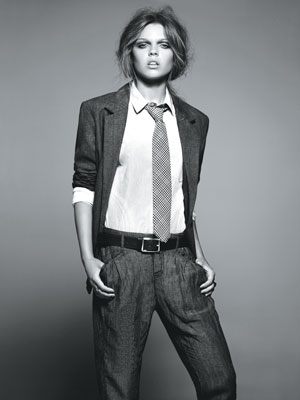 If you think women are too polite to get physical, you have never been to the Women in the World conference. I was there (along with Angelina Jolie, Oprah Winfrey, Christiane Amanpour and founder Tina Brown) for the fourth annual summit in New York City. The morning former U.S. secretary of state Hillary Clinton was to speak, the entrance to the David H. Koch Theatre was so heaving with estrogen that I had to tell the woman behind me who had two hands pressed against my back to stop shoving me, or else.

The buzz around Hillary was understandable. It was the first time she’d appeared in public since leaving her post at the State Department, with approval ratings higher than the president’s. That must have been some sweet revenge, given that Obama’s election was a historical moment for African Americans, but it meant our moment has been delayed yet again.

In many ways, Hillary herself embodies the contradictions of what it is to be a woman now. Although better educated and better prepared than women in the past, clocking more miles than any other secretary of state, Hillary still dropped the “Rodham,” stood by her man, got a makeover and remains only likeable “enough.” And that’s here in the “developed” world. Among fundamentalists and warlords in places like Pakistan, Egypt, India or the Congo, women have to fear for their own survival rather than worry about the consensus on their likeability.

I can’t say I was impressed with Hillary’s pink outfit, which seemed like a Mother’s Day cliché. Yet it’s that kind of sniping that distracts us from the real problems. We’re becoming mired in a culture that keeps telling us that every other social injustice is more pressing; we have dealt with women’s issues and it’s time we moved on. We have dropped the ball on this and we know it: For the generation of women who see Girls as an accurate depiction of their lives, the word feminist is often a slur. When Hillary stood up and called the advancement of rights and opportunities for women “the great unfinished business of the 21st century,” the sold-out crowd roared in recognition and forgot all about her pink suit.

“Too many otherwise thoughtful people continue to see the fortunes of women as somehow separate from society at large. They nod, they smile, and then they relegate these issues once again to the sidelines,” observed Hillary, adding that in boardrooms and offices all over the world she has been mocked and teased for continuing to put women’s issues on the agenda.

It might sound absurdly obvious, but as Hillary said in 1995 at the World Conference on Women in Beijing and felt the need to repeat 20 years later on the Koch stage, “Women’s rights are human rights, and human rights are women’s rights.” The soul-crushing frustration of still being stuck here at square one reminded me of a games night at home when my daughter, Sophie, was a teenager —at a progressive all-girls high school in Toronto— and she wasn’t able to guess the name “Gloria Steinem” for the simple reason that she had never heard of the woman who founded (the now defunct) Ms. magazine.

Now that she is in her early 20s and dipping her toes in the workforce, she no longer rolls her eyes when I gripe about inequities like women making up half the graduating class while remaining tokens in the boardroom. (Not to mention the fact we make up nearly half the workforce here and in the U.S. but still earn only 77 cents for every male dollar.)

And of course she and her friends are waking up to the fact that their school motto, “Girls can do anything,” doesn’t exactly square with recent events around the world, from the shooting of Malala Yousafzai to gang rapes in places like New Delhi and Nova Scotia. If we want to prepare our daughters for life in the 21st century, perhaps it’s time for my “Free to Be You and Me” generation to stop simply repeating “We’ve come a long way, baby” to convince ourselves this fight is over, let alone won.

Could it be that we have reached a tipping point? Hillary, who has just joined Twitter, thinks so, calling this a “remarkable moment of confluence.” She said, “In countries and communities across the globe, where for generations violence against women has gone unchecked, opportunity and dignity virtually unknown, there is a powerful new current of grassroots activism stirring, galvanized by events too outrageous to ignore and enabled by new technologies that give women and girls voices like never before.” It was a rallying cry, and there wasn’t a dry eye in the house.