Four tips to dealing with a dental emergency

My guy and I haven’t been dating that long. I had too tell him because I was practically in tears. Not because it hurt, but because the tooth I had chipped was one of my front upper teeth. Professional hockey players with chipped teeth? Cute! Professional writers who had to appear on a TV show the following day? EMERGENCY! 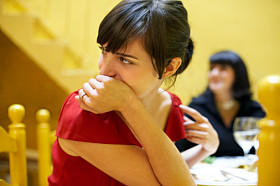 This blog is about something happening (usually bad) in my life (which happens a lot) with tips following from experts to help “fix” the problem. But, just today, I’m going to be the expert. Sometimes, we have no idea what to do after something bad happens. We have to deal with it ourselves. It sucks and there really is no advice, except to live and learn.

Last night I definitely had a, “Help! Fix my life” experience. I was out to dinner with the man I’m dating. We were at one of my favourite restaurants. I had had a pretty crappy day, so was happy to be out. Then at the restaurant, I took a bite of salad and I knew immediately something had gone wrong. I had bit into my fork too hard. I knew immediately that I had chipped my tooth. I knew because I felt myself swallowing part of the tooth. I felt my upper tooth with my tongue and realized I was right. I was mortified.

My guy and I haven’t been dating that long. I had too tell him because I was practically in tears. Not because it hurt, but because the tooth I had chipped was one of my front upper teeth. Professional hockey players with chipped teeth? Cute! Professional writers who had to appear on a TV show the following day? EMERGENCY!

It wasn’t the most romantic dinner ever. How could it be when I kept asking, “Is it that bad? Is it that bad?” (Yes it was, even though my guy kept saying, “It’s not as bad as you think.” He’s nice, but a liar.)

So, here’s what I did to prevent myself from being completely embarrassed on television the next day. (Sorry if you think I’m vain. Would you want to go on television looking like you had just been in a fight?) I asked our waiter if he knew if there were any dentists in the restaurant. (It’s a local place with a lot of regulars. The staff knows most of the diners.) It was kind of like being on a plane and having a medical emergency and having the flight attendant announce, “Is there a doctor on the plane?” There weren’t. Sigh. So I got on my phone and called my best friend. She got on the phone immediately, because she has three boys who are always chipping their teeth and needing dentists.

I also got on the phone and cold-called a friend’s cousin who was a dentist. I called my date’s sister, who I have not met, who was a former dental assistant to see if she could find me someone immediately. Meanwhile I had remembered passing by an after-hour dental clinic near my house. I have driven by it and thought, “Well, that’s a good place to know.” But of course, I couldn’t for the life of me remember where I had seen it.

An hour later I had a brand new tooth, which actually looked better than the original! So here’s what I suggest:

1. Call all your friends with children because they know dentists. Even better, if you have a friend who is married or related to a dentist. You must use your contacts. My friend had a friend who was a dentist, who was kind enough to say he’d fit me in first thing. Beg, beg beg for them to fit you in. They will.

2. I found the after-hour emergency dental clinic doing a Google search. So, bring your damn blackberry even on a date, because something like this could happen to you. And when you see one of these clinics, write down the address so you have it when you need it. Lesson learned.

3. Write this down. If you live in Toronto, this will be helpful: I headed to Dental Emergency Service, which is open seven days a week until midnight, located at 1650 Yonge Street. 416-485-7121.

I also learned a lot about the guy I was with. If a man really likes you, then he won’t really care if you have a chipped tooth in the front of your mouth. This I learned. I need to learn to be less vain. Show the person you were out with that you are so appreciative for making them take you to a dental clinic and asking a hundred times, “Are you sure it’s not that bad?”

Bad things happen at usually the worst possible times. But it can be dealt with from the help of good friends, some begging, a nice dentist, and a supportive boyfriend. And now I’m smiling again! Not just because of my new tooth, but because I managed to deal with the problem myself. Hip-hip hooray!