She exposed Sarah Palin, got Lady Gaga to cry and was the highest-paid new anchor in the world. We turn the tables on TV's most famous interviewer, Katie Couric, and get her to answer the tough questions 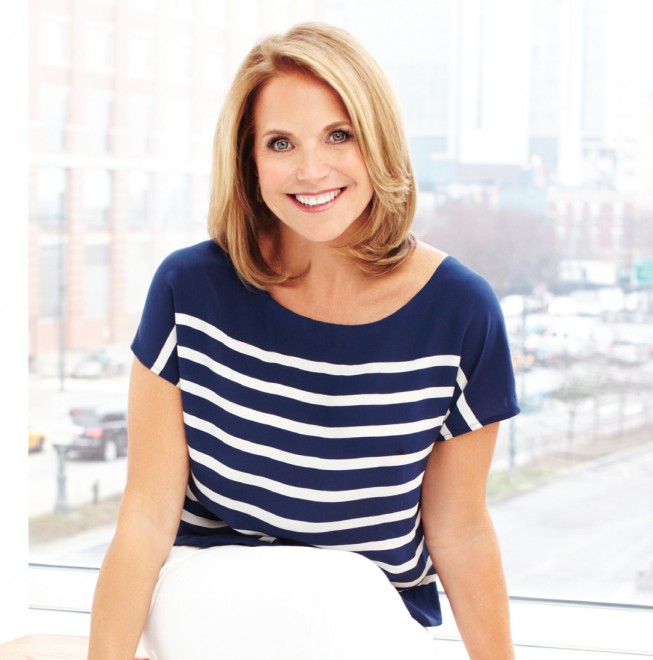 A few weeks before the debut of her new daytime television show, Katie, Katie Couric is on a cellphone in the back seat of a car, en route to a photo shoot. It’s a fancy New York afternoon for TV’s Everywoman. “Well, I’m kind of a big deal,” she jokes in that familiar croaky voice, dosed with the self-deprecation that’s a requisite of morning-television-show banter. For 15 years, as co-host of the Today show, Katie cheerfully navigated the genre’s built-in humiliations, like stepping into a Peter Pan costume and singing backup for Steve Wonder (off key). But in hard-news interviews, she abides no stupidity, as when she cornered George Bush Sr. on the Iran-Contra affair and famously saved the world from an alternate reality by asking Sarah Palin about her reading habits.

This balance of light and tough — along with the white picket fence grin that flashes through both — is Katie’s signature. The combination has served her well personally, too, through an unjust amount of personal loss; both her sister and her father passed away in recent years. In 1998, her husband died suddenly of colon cancer when their daughters were six and two. Katie has transformed the tragedy into a very public role as an advocate for early colorectal-cancer detection.

This intimate, insistently positive Katie is front and centre in ads for her new show, where she blows bubbles, hugs anyone in her path and traipses through a garden in rain boots. It’s as if she’s walking head-first toward an Oprah-sized hole left behind when the patron saint of daytime TV exited for her own network. “People need to get to know me a little bit again as they did on the Today show,” says Katie. “I think that was sort of my authentic self, who I really am. We’re reminding people.”

The comment is revealing: She knows that it feels like she went away, even though she didn’t really. In 2006, Katie moved from the Today show to The CBS Evening News, becoming the highest-paid anchor in the world, at $15 million a year, and the first woman to take the chair solo at a major network. The appointment was unquestionably groundbreaking, but that essential approachability — the Katie-ness that the singular name of the new show’s title trades on —was whittled away gradually, and the broadcast bled viewers until her departure last year. This wasn’t entirely Katie’s fault; TV news is gasping for air in the internet age. But television is a medium of familiarity and comfort, and maybe the public simply couldn’t get used to Katie entering their homes at the wrong end of the day.

Couric returns to the daylight at 55, newly single and extremely buff (she could beat Madonna in an arm wrestle), ready for the next phase. As her driver bumps along the highway on the way to the photo shoot, Couric chats about her hopes for the new show, her private joy and sadness, miniskirts and Oprah.

Q: The old “Can women have it all?” debate is back. Why are we still having this conversation, and what does it mean now?
A: There are real concerns about balancing and juggling, especially for women, because the stereotypical roles in our culture, even though they have changed, give women the bulk of the responsibility when it comes to raising children, and when it comes to family issues. I think until that mindset is altered and until companies try to accommodate working women and men, we’re going to be having this debate. A lot of very successful career women I know have felt inadequate at home and inadequate at work at times.

Q: Did you ever feel that?
A: I worked my butt of in my 20s. I covered the Pentagon before I had my first daughter. When I got pregnant, I was on Today and it actually afforded me a lot of flexibility. I could leave work at two and pick up my girls from school. Obviously, when you’re a single mom, it’s even harder. I think about single moms who aren’t making the kind of money I was making, and who are struggling, and maybe have two jobs. “Having it all” becomes a high-class problem.

Q: Your show will be shot in New York in front of a live studio audience, with a mix of interviews and entertainment. It’s a shift from the hard-edged, more masculine domain of network news — how are you reacting to being in the host’s chair?
A: I still think of myself as an incredibly confident journalist who will also tackle important issues. I may not be travelling to Haiti to cover an earthquake, but I could very well talk about the impact of that earthquake on Haiti and on the people who are volunteering to try to put that country back together.

Q: Why did you want to do this show?
A: There was obviously a vacuum in the daytime landscape with Oprah’s departure. I don’t think I’d want to go up against Oprah. When she left the stage, though, I thought, “This is an opportunity.” I thrive in a setting where I can show all sides of my personality, sometimes serious and sometimes a little more lighthearted and fun. I didn’t really want to keep doing an evening newscast because, quite frankly, it’s not creative enough.

Q: Your bestseller, The Best Advice I Ever Got, was a collection of advice from prominent people. You yourself have suffered such personal losses. What kind of advice do you offer people in your life about how to handle grief?
A: It helps to transfer your grief into something that benefits the greater good. It doesn’t replace the person you lost, obviously, but it’s somewhat cathartic. You are doing something positive in the face of tragedy and loss. Time is helpful, and it is healing, and I do tell people that they need to surround themselves with people they love and stay busy. I remember the one-year anniversary of my husband’s death: I should have gone out to dinner with friends, but I stayed alone by myself with my girls, and it was just so devastating and such a terribly depressing time for me. I’m the kind of person who likes to be around other people and not really retreat into solitude. Other people might be different.

Q: Can you describe a moment of pure joy in your life?
A: When I brought my second daughter home from the hospital, and my husband was playing Brahms on the piano, and my other little daughter was there. That was a really special time.

Q: What’s the easiest way to make you cry?
A: Hallmark commercials. Movies. I’m a big crier. I feel like it’s getting the toxins out of my body. The Descendants completely killed me. I went to see it with my daughter, and we had to stay until the whole theatre had cleared because I was so undone.

Q: Do you think your looks have played a role in your career?
A: TV is a visual medium, like it or not, and women are dissected much more carefully and at times viciously than men. I sometimes think today’s female anchors look like they’re going clubbing or look like cocktail waitresses. It’s always a fine line to look nice and attractive without being overly sexualized. Some of my skirts on the Today show were way too short.

Q: Did you think that at the time, or is it just hindsight?
A: Probably if I’d seen it on the monitor, I would have done something about it. I think women are still a little conflicted. They want to be respected for their intelligence, and they also want to be considered ‘hot.’ It’s a real balancing act.

Q: In interviews, you seem reluctant to oversell the Sarah Palin interview as a critical point in your career.
A: I think it’s so easy to flippantly turn it into a caricature, to position it as some kind of cat fight, which is something that always seems to happen with women. I just don’t want to engage in that. To me, it was no different than an interview with a male vice-presidential candidate, but because of our personalities, it got portrayed as something I don’t think it really was.

Q: Do you consider yourself a feminist?
A: Yes, I’m a feminist. The definition of feminism is the social, economic and political equality of the sexes, so I think most people should consider themselves feminists.

Q: But somehow, the term is still loaded.
A: It’s a distraction to talk about a moniker instead of a message.

Q: Tell me one thing about Prince William that we didn’t see during your interviews with him.
A: He’s got a great sense of humour. I saw him at a reception at Buckingham Palace after a concert. I asked him what he was doing and he kind of rolled his eyes and said, “I’m following my wife around. What else is new?” I started laughing: “Well, get used to it!”

Q: You’re newly single after being in a relationship for five years. What’s it like to be dating at this stage of life?
A: I’m just trying to have a lot of fun. There are a lot of interesting, nice people out there. I feel everyone has something to offer even if it’s not a love connection.

Q: One of the segments of your new show asks viewers to send in their “YOLOs,” meaning “You Only Live Once” — a variation on the bucket list. What’s yours?
A: I haven’t jumped out of a plane yet. Maybe I will!

Interview was edited and condensed. Katie will air weekdays at 4 p.m. ET/PT on Citytv.

In her almost 30 years as a journalist in the public eye, Katie’s got some stories to share.

1. Katie has interviewed some of the world’s most influential public figures and celebrities, from Prince William to Michelle Obama and four presidents: Bush Sr. and Bush Jr., Bill Clinton and Jimmy Carter.

2. Far from flashy, Katie drives a minivan, once telling Elle magazine: “I clearly don’t get my status from my car.”

4. Her legs are legendary, and exercise-obsessed Katie works hard to get them: She’s led spin classes, plays tennis once a week and is now going to N.Y.C.’s latest cult personal trainer, Body by Simone (who helps get A-listers like Sandra Bullock red-carpet ready).

5. Opinionated when not covering the news, in the 2011 documentary Miss Representation, Katie spoke out about the unfairness of women’s sexed-up role in the media.

6. Often described as “perky,” a term she deplores, Katie was once a high school cheerleader.

7. Just two years after her husband died, Katie attracted a new, high-profile admirer — Michael Jackson! The King of Pop used his rabbi as a matchmaker and asked Katie on a date… which she graciously declined.