With players' kids at press conferences and a recruitment program that appeals to parents, the team has put families at its core. 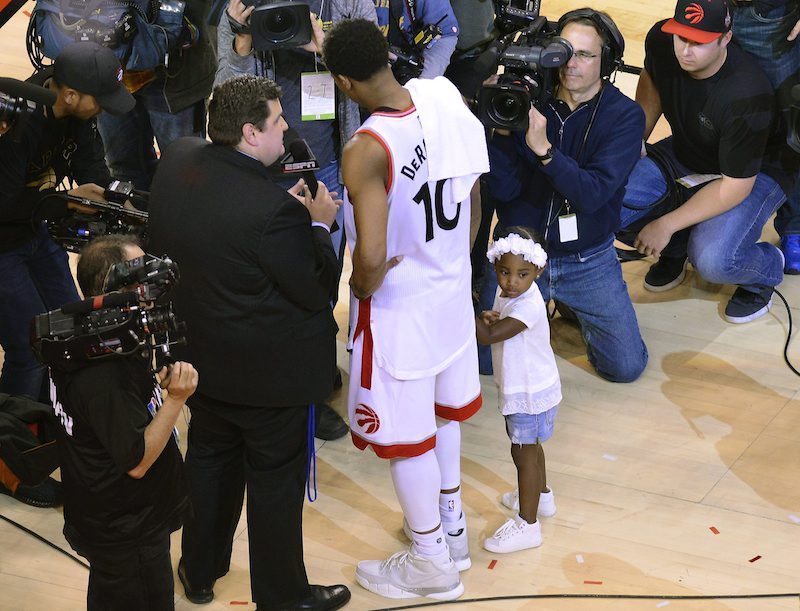 Even for people who don’t care about basketball, the possibility of a NBA Finals matchup between the Toronto Raptors and the Golden State Warriors is thrilling for so many reasons — just imagine all the delirious Drake memes. But there’s also the prospect of toddlers Riley Curry and Diar DeRozan meeting for a courtside play date. The combined cuteness might destroy Instagram.

Riley and Diar, daughters of MVP Warrior Stephen Curry and all-star Raptor DeMar DeRozan respectively, routinely steal the spotlight from their dads. Riley plays peek-a-boo, mugs for cameras and hypes up her dad with a pre-game ritual. Meanwhile, Diar has reduced her father into a blushing mushball when she announced “I love my daddy” into a mic after a hard-won Game 7 win against the Indiana Pacers.

These displays are delightful and sweet, and often way more interesting than hearing another cliché about playing as a team and giving 100 percent. But they’re also remarkable for providing a still-too-rare image of famous men doing the work of parenting.

Think about it: How often do we see fathers in a professional context occupied, in part, by the needs of their kids? Sure, bringing your children to a press conference or a post-game debrief isn’t the hard, thankless work of changing a diaper or quelling a tantrum. But it can be awkward and distracting, like having to bounce a fussy baby or shush a chatty toddler. Or having to conscientiously censor yourself, as Raptor Kyle Lowry did when he was holding his son Karter in a post-game interview and admitted to a reporter that he had been playing like “doo-doo.” These behaviours are immediately recognizable to any parent who has had to multitask — witness Lowry fielding questions while simultaneously trying to stop Karter from guzzling a whole bottle of water just before bedtime. These are dads juggling their jobs and their kids, showing the world that being a parent is as much of a priority as their game performance. The players’ focus on parenting has even had an impact on recruitment. Back in February, Sportsnet Magazine reported on the kid-friendly culture of the Raptors. Between coaches and players, the team has more than a dozen children, and support in finding schools, babysitters and pediatricians has been in instrumental in attracting talent.

Some sports reporters have complained that the presence of kids at press conferences and during post-game interviews is unprofessional — and they may have a point. The antics of toddlers certainly make it easy for players to deflect tough questions. After all, no one wants to interrogate someone about his lousy performance when he has a baby in his arms. And presenting yourself as a family man is undoubtedly great for an athlete’s brand: Earlier this year, an adorable ad for Pantene featuring NFL players styling their daughters’ hair helped make a sport rife with problems like domestic violence and concussions look like it’s played by French-braiding teddy bears.

Much of professional sport embraces a kind of masculinity that can be violent and ruthless, as well as sexist and homophobic — whether it’s the conduct of the players or the attitude of the fans. Up against this macho culture, any display of vulnerability feels revolutionary. Sports dads interacting unselfconsciously with their children and revelling in fatherhood sends a message that athletic greatness and physical toughness can co-exist with emotional tenderness and domestic responsibility. Seeing athletes on the sidelines being loving with their kids is a reminder of their humanity, that they are more than just players and life is more than just the game.

There’s no denying the double standard in these father-child moments. Sports dads, like all dads, are over-praised for simply showing up, while mothers are expected to do the grunt work of parenting without complaint. These high-profile dads have plenty of help when it comes to caregiving: The demands of professional sports often require their spouses to give up or delay their own ambitions in order to look after those irresistible kids who appear on camera at the end of the game — well-fed, well-rested and adorably groomed — to snuggle with daddy. And for female athletes, who don’t have anything remotely close to the same professional and financial opportunities as men do, motherhood was a career-killer until very recently.

Women still do the bulk of childrearing and the bulk of advocacy for workplace family support — and they are more likely to take a professional hit for becoming parents in the first place. One thing that may begin to change that is for men to step up — and speak out — publicly as fathers. While millionaire superstar athletes like DeRozan, Lowry and Curry aren’t exactly relatable, they are role models. And if they can make engaged and involved parenting look fun, important and meaningful, well, that sounds like a slam dunk.

More columns by Rachel Giese:
The burden of being a female star in a Woody Allen film
Jian Ghomeshi’s apology was no apology at all
Here’s why we need gender-neutral washrooms