The image was released to coincide with the airing of BBC's new documentary on Prince Charles. 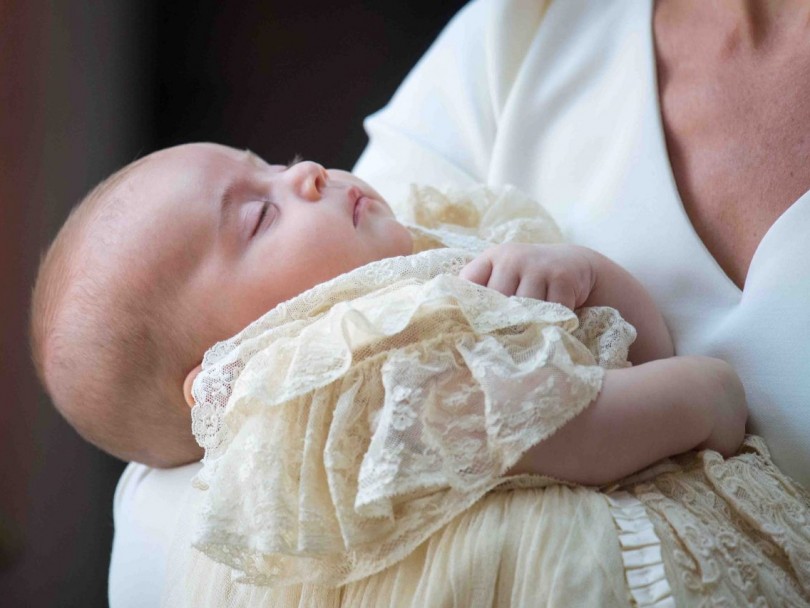 With one week until Prince Charles rings in his milestone 70th birthday, a new photo has been released showing the future king with his youngest grandchild, Prince Louis, and daughter-in-law Kate Middleton. In the sweet photo, the six-month-old adorably grasps his grandfather’s hands while in the arms of his mom, who looks on with a big smile. Giving a glimpse into the private family life of the Prince of Wales, the image was released to coincide with the airing of BBC’s documentary Prince, Son and Heir: Charles at 70. 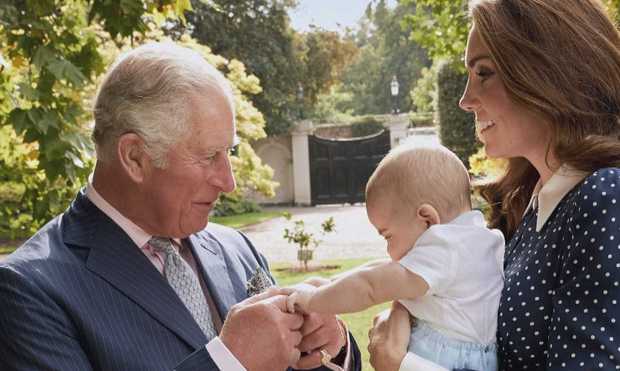 Snapped by royal photographer Chris Jackson, the photograph was taken outdoors. Grandpa Wales, as he’s reportedly called by his grandchildren, wears a blue pinstripe suit with a pink shirt and patterned tie as he smiles amusedly at his little grandson. The Duchess of Cambridge is clad in a navy polka-dot dress with a white collar — which some suspect to be by Alessandra Rich — with her hair blown out and a soft smoky eye. But it’s little Louis who really steals the show with his dusting of light-brown hair, white t-shirt and baby blue shorts.

It’s no wonder the six-month-old gravitates towards his grandfather in the photo. The new documentary has revealed just how wonderful Prince Charles is with Prince William and Kate’s children — though his son just wishes he would slow down a bit and spend a little more time with Prince George, Princess Charlotte and Prince Louis. “He’s the fittest man I know, but equally I want him to be fit until he’s 95. Having more time with him at home would be lovely, and being able to you know play around with the grandchildren. Because when he’s there, he’s brilliant. But we need him there as much as possible.” 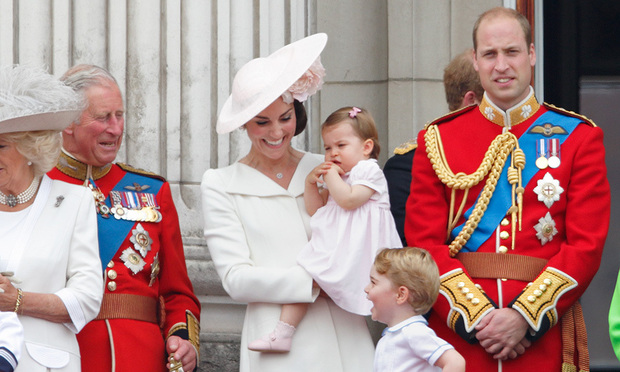 The Duchess of Cornwall elaborated on what brilliant means where her husband is concerned. “He will get down on his knees and crawl about with them for hours, you know making funny noises and laughing and my grandchildren adore him, absolutely adore him,” she shared. “He reads Harry Potter and he can do all the different voices and I think children really appreciate that.”

The first-in-line to the throne is also sure to teach his grandchildren the things that he’s most passionate about, including environmental conservation, and when the Cambridge kids are old enough they can follow in their dad and uncle’s footsteps by helping Charles to pick up trash. “I used to get taken the mickey out of at school for just picking up rubbish,” Prince Harry revealed in the documentary, with William echoing the sentiment. “He took us litter-picking when we were younger, on holiday. We were in Norfolk on school holidays, and we went out litter-picking with him. And again, both of us thought, ‘Well this is perfectly normal, everyone must do it.’ We were there with our spikes, stabbing the rubbish into plastic bags.”