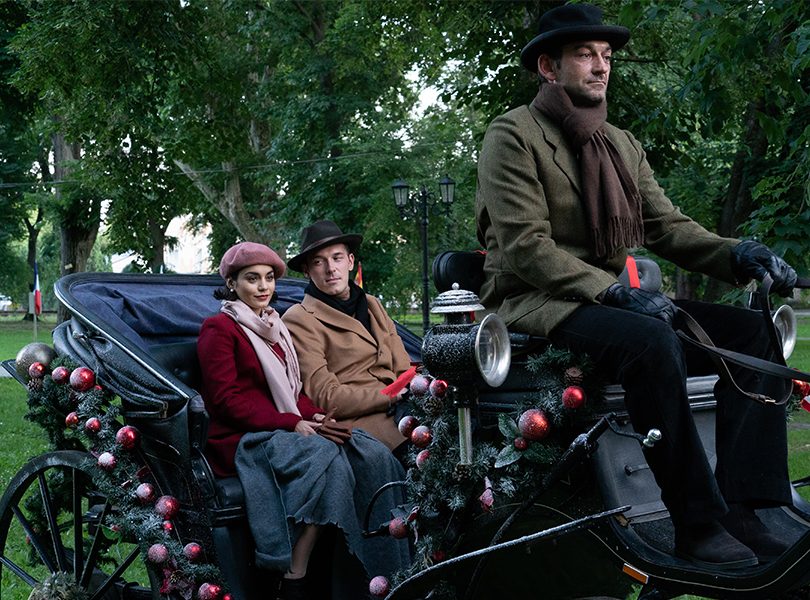 I look forward to Christmas dinner every year, but not because of the food. Don’t get me wrong, I will show a pile of scalloped potatoes who’s boss and every year, I inevitably end up eating so much that I have to lay sideways on the carpet after dinner. But what I *actually* love about Christmas dinner isn’t the turkey or its various sidekicks. On their own or at any other time in the year, these dishes are just OK. However, during the holiday season, this meal is more than the sum of its parts — it’s the definition of comfort food, a mind-numbing, coma-inducing, carb-filled reward for making it through another year.

Netflix’s The Princess Switch is basically the Christmas dinner of holiday movies.

The soon-to-be holiday classic, which starts streaming on November 16, stars Vanessa Hudgens and Vanessa Hudgens. Nope, not a typo. The High School Musical graduate is returning to the screen in not one, but two leading roles as both Margaret, duchess of a fictional country called Montenaro who desperately wants to experience life as a commoner, and Stacy, a bakery owner from Chicago. And — yes, you guessed it — when these two ladies (literally) bump into each other, they decide to pull a Parent Trap-style swap and in the process, get much more than a few stories to tell around the Christmas dinner table.

Let’s be real, this movie isn’t going to win any awards and at any other point in the year, it’s the type of flick that would be released straight to DVD. But as a holiday movie, this simple, predictable and often overly-sweet offering is exactly what I wanted.

*Insert Stefon voice here* This movie has everything: twins who didn’t know they were twins, a secret handshake, bad accents, made-up European countries (what uppppp Belgravia), romantic dancing in a twinkle light-filled gazebo, a horse-drawn carriage ride in the snow, a baking competition, a child who is overly obsessed with Christmas and a mysterious and magical old man meddling in the lives of perfect strangers to help them find love.

Basically, if you turned The Princess Switch into a holiday movie tropes drinking game, you will be absolutely sauced before the musical montage of Margaret and Stacy learning how to be one other.

Yes, this movie is obviously Netflix pandering to our seemingly endless appetite for holiday films that feature different B-list celebrities and slight adjustments to the type of small business the female lead runs. But there is a reason why after only one week, the trailer for this film — which makes it pretty clear that The Princess Switch offers nothing new aside from adding two fictional countries to the holiday movie map — has more than two million views.

This year has felt like a decade. Truly, the van attack that shook Toronto feels like it was ages ago, but it was April of this year. Activist Emma González became a household name and a symbol for the power of today’s youth, but it’s only been a matter of months since the shooting at her high school in Parkland, Florida spurred her to action. And it hasn’t even been a full year since celebrities banded together to introduce the world to Time’s Up. Add in Trump’s endless barrage of alarming tweets and it’s no wonder that no amount of serums can rid me of the wrinkles that the news cycle have caused.

In these uncertain times, holiday movies like The Princess Switch are not just entertainment, they’re a source of comfort because we know exactly what we’re getting: A simple, entertaining story, complete with all the Christmas fixings you’ve come to know and love. (I mean, I don’t watch Love Actually or The Holiday every year because they are cinematic masterpieces.)

So tuck in and get ready because The Princess Switch is basically a feast of all your holiday movie favourites and it is as delicious as it is cheesy.