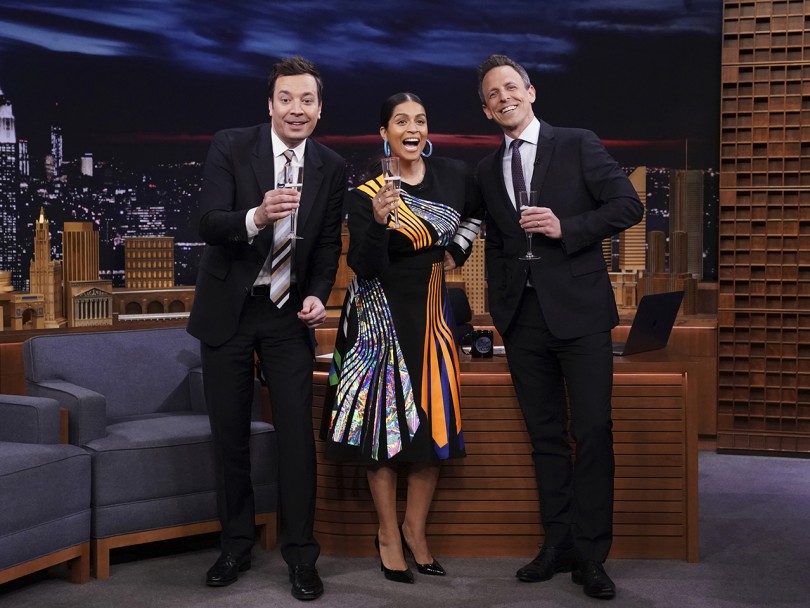 NBC’s got a new late-night comedy queen and it’s none other than Lilly Singh, a.k.a. IISuperwomanII, a.k.a. our fave bawse babe. Cue the screams.

The Canadian YouTube sensation, who hails from Scarborough, Ont., announced on The Tonight Show With Jimmy Fallon that she would be getting her own NBC late-night show called A Little Late With Lilly Singh. The half-hour show is set to air at 1:35 a.m. ET (a slot currently occupied by Late Night With Carson Daly) beginning in September and will include in-studio interviews and pre-taped comedy sketches, according to NBC.

It’s official. Ya girl is getting her own @nbc late night show… A Little Late with Lilly Singh. Thank you so much for being here. I am truly so grateful. ❤️

“I’m so excited because I truly get to create a show from scratch, you know, I get to make it inclusive, I get to create comedy segments and interview people and really create something that I believe in. And I’m so honoured and humbled,” Singh told Fallon and his audience on March 14.

The announcement is major for many reasons. First, Lilly will be the only woman to host a daily late-night show on a major broadcast network (current late-night hosts are predominantly white men, such as Fallon, Seth Meyers, James Corden, Conan O’Brien and Jimmy Kimmel), not to mention the only YouTube star to transition to this type of role. And while Joan Rivers was the first woman to host a late-night show (The Late Show With Joan Rivers aired on Fox from 1986 to 1988), Singh is the first ever LGBT woman and first woman of colour to host a show of this kind. Additionally, Singh will serve as executive producer alongside Polly Auritt, who heads up Lilly’s Unicorn Island Productions, according to Variety.

Reason to Smile: @IISuperwomanII, a bisexual woman of color, is now hosting her OWN late night show on NBC?? This is the best news of the day.

“A huge shoutout to all the women who have been before and are currently in the space because I couldn’t have done it without them paving the path… but I do think it’s a little awesome for an Indian-Canadian woman also to have a late night show,” Singh told Fallon.

Lilly has come a long way since posting her first YouTube video eight years ago from her parents’ basement in Markham, Ont. What started off as a way to fight through her depression turned into a channel with 14.5 million subscribers that has racked up almost 3 billion views thanks to her comedic videos and hilarious spoofs, which normalized Punjabi culture. In 2017, Forbes listed her as one of the top 10 highest paid YouTube stars, earning a reported $10.5 million, and she was also ranked first on the publication’s 2017 Top Influencers List in the entertainment category. For both accolades, she was the first Canadian and South Asian Canadian to earn those titles, according to HuffPost Canada.

Lilly Singh will actually go down in history of YouTube and in the books of the Indian community. We all truly couldn’t have chosen a better role model, y’all. I’m so overwhelmed and proud even after all these hours 💙

She’s also appeared in Bad Moms and HBO’s Fahrenheit 451, released a New York Times-bestselling book, How to Be a Bawse: A Guide to Conquering Life, collaborated with Smashbox cosmetics on a dark red lipstick, aptly called “Bawse,” and has created a social media campaign called #GirlLove that encourages young girls to spread love by complimenting other girls rather than insulting him. She has since created a partnership with Me to We to sell #GirlLove bracelets and necklaces to support education for girls around the world.

And that’s why Lilly’s late-night show is such a big deal. Singh is a true self-made woman with humble roots who has worked her way to the top thanks to hard work, talent and determination. Unlike some of the peers around her, she is using her influence for good and using her platform to advocate for things that are important to her, like feminism, representation, self-love and women supporting women. She’s breaking barriers when it comes to South Asian women, whether that be through talking openly about her mental health (something still considered very taboo in the South Asian community), coming out as bisexual or simply showing through her videos that brown girls can be funny, outspoken, kind and, well, bawse babes. To have a bisexual woman of colour bring this type of awareness to a major network is monumental, to say the least.

1. Someone from my hometown hosting a late night show

3. A woman of colour

These are all things I thought I'd never see in that role, but I'm thrilled it's happening. Congrats @IISuperwomanII #RepresentOnAllFronts https://t.co/L38EabGwCp

Started from Scarborough and now she’s 🍾

Massive respect to Lilly Singh, one of the hardest working people I’ve ever met.

Congrats @IISuperwomanII on your new @nbc late night show! This is monumental! A bisexual woman of color hosting her own Late Night Show on @nbc Major! I will be watching and supporting! #SpreadTheWord pic.twitter.com/QMrOAF0COO

So yeah, let’s just say we’re pretty damn proud of Lilly, and can’t wait to tune in and see what the show brings.