In a recent New York Times article, actor James Franco defends the Tranformer star for his strange antics as of late. 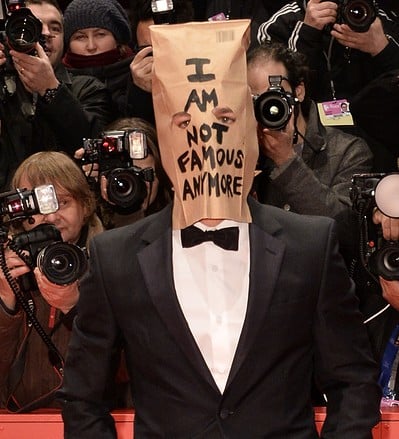 Transformers star Shia LaBeouf appears to be experiencing a public meltdown, or protracted toddler tantrum. The 27-year-old actor recently walked out of a press conference at the Berlin Film Festival and later appeared on the red carpet premiere of his new film Nymphomaniac wearing a paper bag over his head.

Written on the bag in black Sharpie was the phrase: ‘I’m not famous anymore.’

Once back in the U.S, he held an art show called #IAmSorry in an LA gallery. The show consisted of him wearing a bag over his head. Tabloids and entertainment weeklies have had a field day speculating about what all this means.

But there’s more to LaBeouf’s meltdown than we may think, argues actor James Franco in an Op-Ed for the New York Times.

Franco, no stranger to playing with public perception, suggests that LeBeouf may be enacting a kind of “performance art, one in which a young man in a very public profession tries to reclaim his public persona,” writes Franco.

That, or he’s having a nervous breakdown.

If it’s the former, Franco can relate. The actor confesses to feeling disconnected between his public persona and his naturally more complex personal character. It’s fame’s double-edged sword and in response some actors act out. When they get negative publicity they act out again, which results in more negative publicity, and the wheel of self-inflicted insanity spins and spins and spins.

“Participating in this call and response is a kind of critique, a way to show up the media by allowing their oversize responses to essentially trivial actions to reveal the emptiness of their raison d’être,” writes Franco.

Like most actors, Franco is under the impression that the term “media” is interchangeable with entertainment media or tabloids.  That may be because most actors are addicted to their own press and don’t venture into other genres which hold some more estimable reasons for being. Not every journalist is writing about Kim Kardashian’s alleged butt implants, though far too many do. Calling the media trivial is like assuming Transformers 2 is an apt synonym for Godfather II.

In the ongoing love-hate relationship between actors and the media, however, the group that may have the most justifiable reason for acting out is the public. Maybe Shia LaBeouf has a spare paper bag on hand? I know what I’d write on mine: I’d rather be watching Game of Thrones.