Amy, Mindy, Tina, Lena: For the first time in history, women own the comedy scene — and they’re using it to ignite conversations about everything from body image to rape culture. Feminism has never been (so) funny. 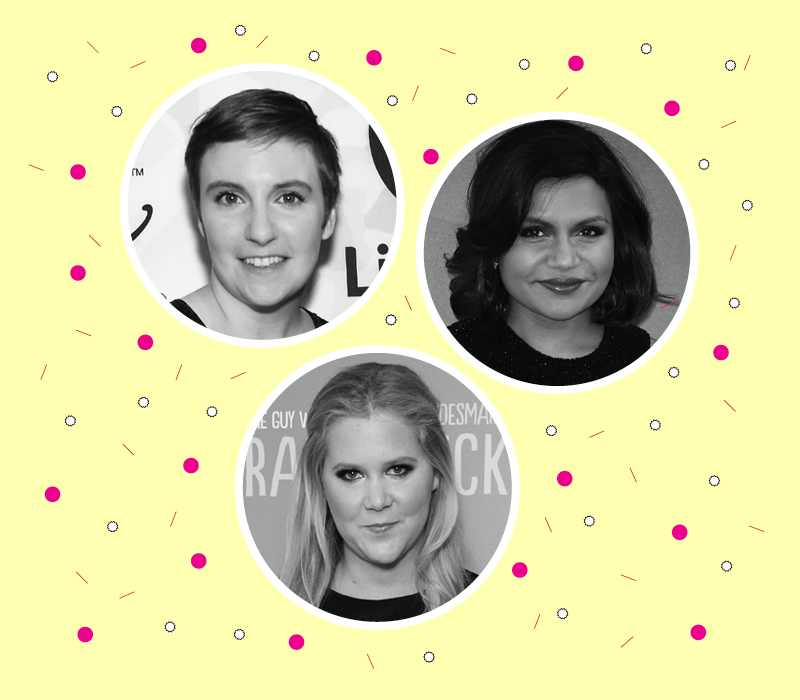 Samantha Bee has yet to announce a title or a premiere date for her upcoming TBS late-night talk show, but she already has a promo. In it, the former Daily Show correspondent stands in an art gallery surveying walls filled with photos of current late-night TV hosts, every one of them male. “When I take a look at each piece individually, I like it,” Bee says. “Then when I take a step back, I think that something is missing.” A waiter arrives. “Sausage?” he asks, presenting her with a platter. Bee stops him: “Actually, you know what?” she says. “I think I’m kind of done with sausages.” A voiceover then announces Bee’s new late-night show, with Bee having the last word: “And I am female as f–k,” she says, the expletive drowned out by a “bleep.”

Bee’s “female as f–k” boast is calculated to get a laugh — and resonate at a time when late-night talk is under fire for its lack of female voices. Everywhere else you look, though, funny women are front and centre. Four years after Bridesmaids proved that female-centric ensemble comedies can do boffo box office, Hollywood is churning them out: Pitch Perfect 2 with Anna Kendrick and Rebel Wilson, Spy with Melissa McCarthy, Hot Pursuit with Sofia Vergara and Reese Witherspoon and Trainwreck, written by and starring Amy Schumer. And that’s this summer alone.

One result of this development has been a stealthy shift in the cultural conversation to topics formerly annexed as feminist — inequality, sexism, sexual double standards, rape culture. Just as Chris Rock and Dave Chappelle used humour to open up mainstream discussion about racism, female comedians are reframing feminist issues in a way that brings everyone, men and women both, in on the joke. In the process, they’re reaching a far wider audience than street marches or consciousness-raising ever did, while subversively detonating the classic put-down used to discredit feminists: They’re “humourless.”

It’s a turn of events that could not have been predicted less than a decade ago, when Christopher Hitchens’ 2007 Vanity Fair essay “Why Women Aren’t Funny” was taken seriously enough to spark rabid debate. Hitchens didn’t dispute that women can be great wits or comedians, citing Ellen DeGeneres, Dorothy Parker, Nora Ephron and Fran Lebowitz (while overlooking Phyllis Diller, Joan Rivers, Bette Midler and Roseanne Barr, to name a few). Instead, he framed what he saw as the gender humour gap in Darwinian terms, writing that men’s capacity to make women laugh evolved so they could attract them. Women have no corresponding need, he wrote: “They already appeal to men, if you catch my drift.” Female comedians, on the other hand, are outliers, wrote Hitchens, who described them as “hefty or dykey or Jewish, or some combo of the three.”

Tempting as it may be to write Hitchens off as a troglodyte, his essay is instructive in revealing how humour fits in the cultural power dynamic, one that traditionally has skewed male, as Lebowitz says in the essay: “For a woman to say a man is funny is the equivalent of a man saying that a woman is pretty.” She’s talking about cultural currency. But humour is a power tool — a way to bond, to build alliances, to make people like you while you make subversive or impolite comments questioning the status quo.

Hitchens’ argument that only men can be funny was also grounded in the retrograde thinking that men are “active” and tell the jokes, while women are “passive” and laugh at them. Women who sought their own laughs were, per Hitchens, denounced as unwomanly, which is to say threatening, as Rivers observed in a 2008 interview. “Men don’t want you too funny,” she said. “I think they’re terrified that you might be smarter than they are.”

Clearly, not all men see it that way, given female comedians’ ability to attract male fans and collaborators. Judd Apatow works closely with both Dunham and Schumer, who has the male comedy A-list, including Louis C.K. and Bill Hader, lining up to work with her. That these women are smart isn’t in question: They’re using their intellect to achieve a non-threatening, very human balance between wise and silly while broadening the definition of what a feminist sounds like. A straight line exists between Fey’s Liz Lemon — a woman able to finesse a high-powered job while utterly inept managing her romantic life — and Kaling’s pop-culture-obsessed gynecologist, Mindy Lahiri, on The Mindy Project. We’re also seeing comedic exploration of intersections between feminism, class and race on shows like Orange Is the New Black and Broad City, a show about the friendship between two female slackers that makes the point that smart, interesting women also occupy low-level jobs.

Humour thrives on questioning, mocking and undermining the established order. That gives female comedians a goldmine of material, given a status quo that includes on- and offline misogyny, size 00, child beauty pageants, Bill Cosby and The Bachelorette. No one has proven more adept at skewering these social inanities and injustices — from barista culture to rape culture — than Schumer, whose show draws 1.4 million viewers to Comedy Central on Tuesday nights, with 27 million watching on YouTube. She’s an equal opportunity satirist: Nobody’s exempt, including herself. Female behaviour, exaggerated for comedic effect, is a regular target. Her sketch “Compliments” features a group of friends so competitively self-deprecating that when one of them finally accepts a compliment, the others all commit suicide. (It’s a mark of Schumer’s influence that when, in early July, the New York Times ran an opinion piece called “Why Women Apologize and Should Stop,” it alluded to the sketch.)

Schumer’s show, in its third season, achieved mainstream velocity this year when she began taking direct and repeated aim at sexism and rape culture. In another sign of the times, she has received death threats. “That was scary,” she recently told Glamour magazine. But it just made me want to use my voice more.” Schumer has said that she deploys humour to stoke awareness: “My [career] has been about tricking people into listening,” she told The Hollywood Reporter in a recent roundtable featuring the “Comedy Actress A-list,” a group that included Dunham, Tracee Ellis Ross (Black-ish) and Gina Rodriguez (Jane the Virgin). Her “Football Town Nights,” a pitch-perfect parody of the beloved TV show Friday Night Lights, is a classic example. In it, Coach Thompson, played by Josh Charles, enforces a “no raping” rule, which baffles his high school players (one asks, “But what if my mom’s a D.A. and won’t prosecute?”). In the span of five minutes, Schumer slams rape apologists and connects the dots between rape culture and a sports-obsessed culture that glorifies aggression. “Football isn’t about rape,” faux Coach Taylor tells the team. “It’s about violently dominating anyone who gets between you and what you want.”

The fact that it’s not even necessary to exaggerate to get a laugh reveals a lot about the current moment. Take Schumer’s April 2015 sketch “The Last F–kable Day” in which she stumbles upon Fey, Julia Louis-Dreyfus and Patricia Arquette in a pastoral scene straight out of a female hygiene ad. After they tell her they’re celebrating Louis-Dreyfus’ last “f–kable” day as an actor, Schumer asks about the equivalent day for male actors. The others laugh uproariously — because of course there isn’t one. Weeks later, life imitated comedy: 37-year-old actor Maggie Gyllenhaal announced she’d been told she was too old to play the love interest of a 55-year-old male lead.

The success of these comics is slowly being parlayed into building new entertainment infrastructures led by women: Fey, Poehler, Dunham and Schumer all run production companies that champion female alliances. Fey produces Unbreakable Kimmy Schmidt on Netflix. Poehler, an executive producer of Broad City, has taken her mentoring of young women online as co-founder of the “Amy Poehler’s Smart Girls” website amysmartgirls.com, “a place for information, comedy and community.” Dunham recently announced she’s producing a newsletter that promises a mix of “feminism, style, health, politics, friendship and everything else.” There’s plenty of cross-networking as well. McCarthy, about to launch a clothing line for larger women shunned by the fashion industry, recently used DeGeneres’ daytime platform to talk about calling out a film critic who trashed her appearance.

Schumer used her acceptance speech for the “Trailblazer” award at the 2015 Glamour Women of the Year Awards to thank Goldie Hawn for her inspiration and to condemn the unrealistic body standards that women face (and impose on themselves): “I’m probably, like, 160 pounds right now,” she said. “And I can catch a dick whenever I want.” The crowd cheered — not only because the line was funny, but also because Schumer deftly dismantled another tired sexist assumption. That her comment is also a militant rallying cry should serve as a reminder of why the mainstreaming of female comedians is needed now more than ever.

Related:
Mindy Kaling farts, and you should too
Samantha Bee tried it: rompers for grown women
Something’s wrong with Amy Schumer’s movie poster