A date with Tommy Chong: 'Old guys have a nice musky smell'

The lifelong toker on Canada's pro-pot prime minister, his new Disney stardom and the secret to a happy marriage. 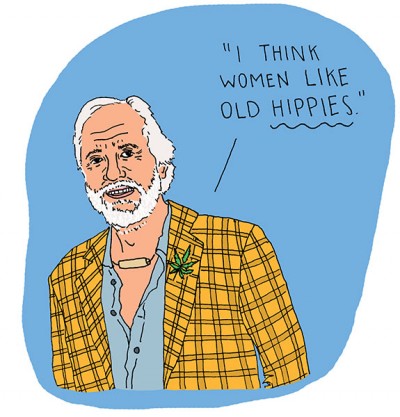 You’re one of the stars of Disney’s latest animated movie, Zootopia. Were you surprised that a squeaky-clean company like Disney would cast a man of your reputation?
Well, actually, I turned down a Disney movie years before. It was a part [of a hyena] in The Lion King. Years later, I met the writer and he was really hurt because he said he had written that role just for me.

Your character, Yax the yak, is a super-chill, long-haired hippie who runs a nudist resort. Was he also written for you?
I think he was. He’s basically me in the form of a yak.

Yax believes men shouldn’t use soap or deodorant. What are your thoughts on male grooming?
They’re similar. I don’t do anything sprayed because it harms the environment. I use underarm deodorant but that’s about it. I think old guys have a nice musky smell to them — you don’t want to ruin that.

Do you think women still like guys with long hair or has that era passed?
I think women like old hippies because we make them feel safe and secure.

Given that this is our first date, what would turn you off more: finding out that I don’t smoke pot, or that I am a Donald Trump supporter?
I could handle the no-pot thing but not the Trump. I’d put you in rehab.

Trump rehab?
Exactly. Or I’d get you smoking pot. That way you’d never vote for Trump.

There is actually a dating app for pot users called High There. If you were single, would you try it?
Yes, but I’d need someone to show me how. I have a cellphone, but it’s like a Rubik’s Cube to me. I learned how to work the camera but I still don’t know how to use Instagram.

You moved to the U.S. several decades ago. Now that we have a pro-pot prime minister, might you consider coming back to us?
I never left. I’m still a Canadian citizen [as well as an American one]. I still have a lot of connections in Canada. I have a home in Vancouver and a daughter in Toronto.

What if Trump gets elected?
Well, then I’d probably move to Canada, but that ain’t gonna happen. The Republicans won’t let it.

Justin Trudeau supports the idea of pot being legalized and regulated. What do you think of pot for sale at provincial liquor stores?
I don’t care how they do it or where they sell it. If you don’t have to worry about getting busted, it’s going to flourish. I think selling it at drugstores would be more fitting than liquor stores. Pot is more medicine than it is anything else.

You and your wife, Shelby, have been married for more than 40 years now. What’s the secret?
Adore your wife. Worship her. Also, you have to be together. When I started touring with my solo comedy act, I realized that I’d be away from Shelby too much, so she ended up coming with me. Now she has her own comedy act. She’s amazing.

What do you think Shelby finds more irritating: your pot smoking or having to share you with Cheech?
Ha! Well, it’s funny — when Cheech and I broke up, Shelby became my [touring] partner, and when we were going to get back together again, she took me aside and said, “You’re not leaving me for Cheech!”

Do you ever look at stoner comedy today — the Judd Apatow movies or the Harold & Kumar movies — and think, “I started that”?
I don’t think we started anything. We just showed the world what was going on, in a new way. No one had seen a Mexican and a half-Chinese guy doing hippie comedy. We made our dent. As far as stoner culture [being popular], I’m not surprised: When you’re high on pot, you laugh at stupid things.