Duchess of Cornwall, winning hearts with her unpretentious style

The royals were in Canada recently to share their passion for the farm-to-fork movement. Leah Mclaren caught up with them in East Sussex before their Canadian tour. 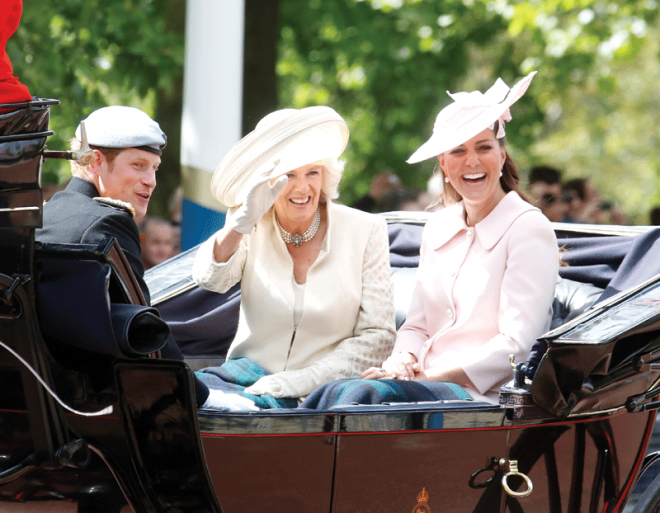 The duchess in a carriage with Prince Harry and the Duchess of Cambridge at Trooping the Colour. Photo, Julian Parker/Getty Images.

It is rather early for a glass of wine, and yet… Will the duchess be coaxed into having a sip of handcrafted bubbly this morning? It’s 11:30 a.m. at Plumpton College, a small post-secondary school tucked into the verdant hills of East Sussex that specializes in agriculture and winemaking. A crowd of students, bespectacled professor types, country ladies in pleated skirts and local dignitaries have gathered in the school’s new Wine Research Centre to welcome the Duchess of Cornwall, college patron and patron of the United Kingdom Vineyards Association.

I’m here in Plumpton to see the duchess in advance of her upcoming official trip to Canada — the first one since 2012, when she and her husband, the Prince of Wales, came over to mark the Queen’s Diamond Jubilee. The royal couple will be visiting Nova Scotia, P.E.I. and Manitoba on a tour that will partially focus on one of Their Royal Highnesses’ keenest interests: the local-food movement. While full details of the tour are closely guarded because of security risks, Clarence House (the royal family’s press arm) could disclose that the duchess and Prince Charles will be visiting the Seaport Farmers’ Market in Halifax, where, chances are, they’ll come eye to eye with a Pictou County lobster.

For now, however, it’s all about English wine. We hear the royal helicopter before we see it: an unmistakable burgundy chopper accompanied by a magnificent roar. The royal entourage alights in a neighbouring field, and a few minutes later a convoy and police escort glide into the parking lot. Think what you will about the royals — they do know how to make an entrance. 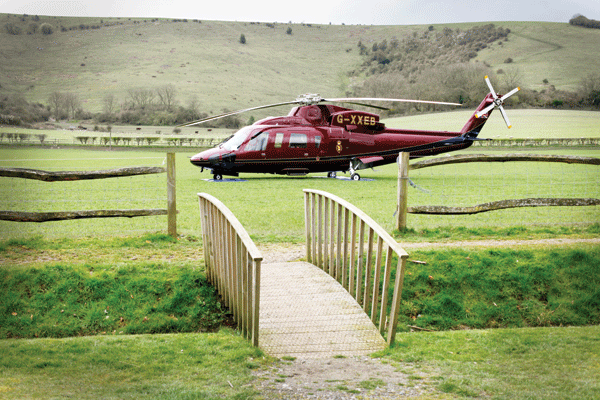 The Duchess of Cornwall arrives in the royal helicopter. Photo, Charla Jones.

The duchess steps out of the back seat of a gunmetal-blue Audi sedan and looks round, beaming out from under her signature blond feathered hairdo — a style that she has kept since the ’80s and hopefully always will. She is elegant and surprisingly tiny in a tartan-tweed coat dress, brown suede boots and a vintage turtle brooch. “How wonderful to be back!” she exclaims with real enthusiasm, reminding the assembled crowd that she is a Sussex girl (her parents had a farm just down the road, and her father was in the wine business himself). After she is ushered into the wine lab and introduced, someone presses a large glass of sparkling rosé into her hand. “Well, thank you,” she says, taking a generous sip and pronouncing the wine delicious. “So this is the all-important tasting room, is it? I imagine a few people have staggered out of here, haven’t they?”

The students laugh and the ice is officially broken. From there, the royal visit goes swimmingly — which is to say brightly, politely and perfectly on schedule. The duchess tours the wine lab and the bottling factory and even exchanges pleasantries with several of the college donors before climbing back into her car, which will carry her to her next engagement — a visit to a local craft museum.

While it’s easy to imagine the life of a future queen as a leisurely one, it takes only a few minutes in the Duchess of Cornwall’s company to see she works very hard indeed. She moves through her duties calmly and with presence, always engaged in the moment and never wandering off on a tangent. It is clear she is a natural, though she might not have been. Unlike the Queen, or her husband, the Prince of Wales, both of whom were born to their roles, the woman formerly known as Camilla Parker Bowles has come late to her title and duties.

In this sense she is lucky, having brought up her children (she has two, Laura and Tom) from her first marriage outside the glare of public life. But her second marriage, to the heir to the throne and the man widely considered to be the love of her life, has by all appearances proved a happy one. Nearly 10 years into her life as Her Royal Highness, she seems happy, relaxed and completely settled in her role.

In recent years, the duchess has steadily taken on more and more charitable commitments, with certain common themes emerging, most notable among them literacy and helping victims of rape and sexual assault.

Her interest in agriculture, food and wine is perhaps not surprising, given that she comes from what her staff describe as “a very foodie family.” (Her son, Tom Parker Bowles, is a respected cookbook author and restaurant critic.) According to Clarence House staff, she enjoys both growing her own food and cooking it at home. Like her husband, who originated the successful organic food line Duchy Originals, the duchess is a firm believer in farm-to-fork eating. 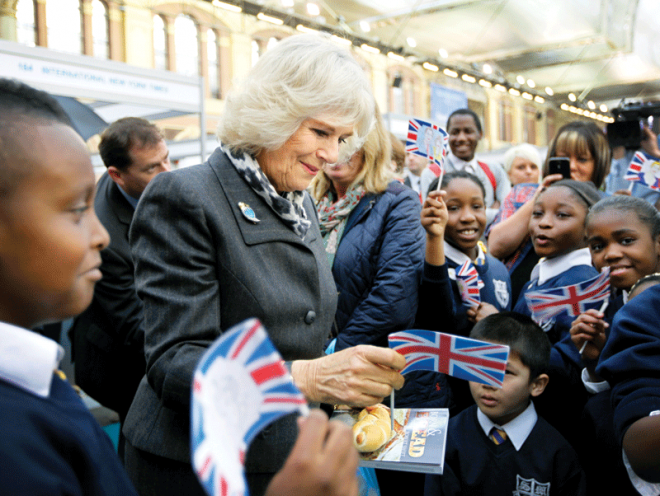 Later in the week, Their Royal Highnesses attend the Edible Garden Show at Alexandra Palace in North London, where they present the prize for best edible-garden design in the School Food Matters competition. This is a far more hectic event — more people, fewer opportunities to linger — but the royal couple move from stall to stall, seemingly oblivious to the crowds of admirers and gawkers, chatting with genuine interest with compost experts, organic-chicken-feed vendors, edible-flower growers, allotment gardeners and heirloom-apple-juice pressers. At one point, the duchess stops to buy two canisters of wool pellets, which are said to keep away slugs (her private secretary pays for them from the duchess’ sleek gold clutch, which she is tasked with carrying). She also chats volubly with a man from the Wildlife Trust about an “absolutely enormous” snake she once found in her pond. In the end it was just a grass snake, but he agrees “they can be rather alarming.”

Eventually, the duchess splits off from her husband (who is discussing the ingredients for a rather fetid-sounding compost cocktail with a farmer) and wanders over to the booth of Olivier’s Bakery, a famous outlet in London’s Borough Market. She selects a large, delectable-looking almond croissant and tries to pay for it, but the charming French bakers refuse to take her money. She promises to return to their shop with her son.

There is a common misconception that members of the royal family are quite stiff, when in fact they are the masters of charming small talk. They shine as tellers of harmlessly funny anecdotes and askers of curious questions. The Duchess of Cornwall is particularly good on this score, having learned at her husband’s side — a man whose passions (for architecture, history, rural life and the environment) are well documented. His wife is similarly engaged and interested, but never more so than when chatting with children, with whom she has a particular affinity. 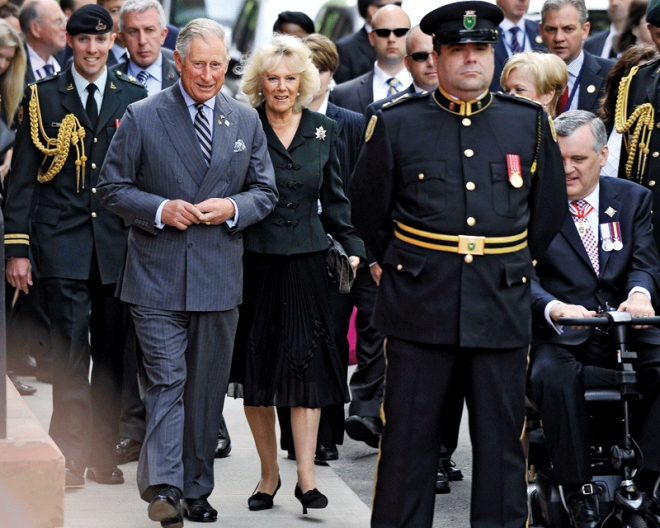 Prince Charles and the Duchess of Cornwall visiting the lieutenant-governor in Toronto as part of their Diamond Jubilee tour. Photo, Charla Jones.

Stopping to watch a group of London schoolchildren kneading dough, the duchess asks one little girl to teach her how to do it. Together they weave a long noodle of dough into a small braided loaf. When the instructor emerges with the final baked result, she and the schoolgirl smile at each other, hugely pleased.

And with that, the duchess and her husband head for the door, beyond which a car and driver are waiting. Their staff and a phalanx of security follow close behind, carrying baskets of jam and jellies and slug repellent.

You can request an official photo of Her Majesty Queen Elizabeth II and His Royal Highness the Duke of Edinburgh (free of charge!) by calling 1-800-O-CANADA.

Canada is the only country that commemorates Queen Victoria with an official holiday.

The Queen will send any of her subjects a card for their 100th birthday of their 60th wedding anniversary; the request form is at gg.ca.

FILED UNDER: the royals