Do you know your spouse's salary?

A friend recently told me a story about one of her colleagues, who has been with her boyfriend for ten years, and has lived with him for three. Her boyfriend works at an investment firm, and this colleague of my friend’s never cared about his salary, until recently. 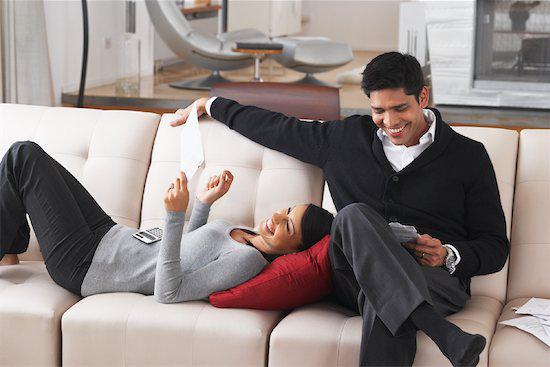 A friend recently told me a story about one of her colleagues whose partner refuses to tell her how much money he makes. They’ve been together for ten years, and living together for three of those. It was only recently that she wanted to know and so she asked. And he (who works at an investment firm) refused to answer.

Naturally, upon hearing this story, I wondered why he wouldn’t share, especially after she asked, considering they have been together so long. Plus, he knows her salary. That said, I’ve never really known my boyfriend’s (or ex-boyfriend’s) salaries and I don’t think I’ve ever asked. But I wonder how I would feel if I did ask, and they refused to tell me. My friend’s colleague and her partner split all the bills equally, which may or may not be fair if he is making a lot more than her. What if one day he wants to move into a bigger place and she can’t afford it but he can? They’ll have to talk about it then, right?

I asked a number of women what they had to say on the subject. I also spoke to a former editor of MoneySense for thoughts and tips on the matter.

What other women think

There are lots of reasons why people might want to keep their income to themselves, and although that might come across as a negative message about what that means for your relationship, you have to remember that money and love don’t necessarily go together,” says one woman.

“If you’ve been together for ten years, I don’t see why he shouldn’t share his earnings. At that point you’ve probably been through a lot together,” another woman thought.

“If you live separately, and don’t share bills or expenses, I suppose it’s really not your business to know. However, if you’re living together and are financially involved in one way or another, it would be helpful to know/be in the loop with what his income is,” says another woman.

“If you’re someone who likes to spend, he may keep his money to himself because he doesn’t want to support that, or make you think that he has the money to do so. He might be worried you’ll suck him dry and in turn won’t want you to know,” says another. Can you be any more blunt?

“Maybe he was taught or raised that you don’t discuss money. That you don’t ask other people what they make, and if you’re ever asked you just keep it private,” one friend suggests.

“If he doesn’t have a high-paying job, perhaps he’s embarrassed to tell you. No matter how much you tell him you love him for who he is and not for his money, it might still be a shot to his ego to divulge that kind of information,” says a friend.

What does the money expert think?

A former editor of MoneySense first suggests that you decide how important it is to you to know what your partner makes, and how it changes your life to have that information — if it does at all. “Money is the number-one issue that people fight over in marriage. But if you are just dating, you may find out and wonder if it’s too high for you? What if it’s too low? But if you’re married, and plan to buy a house or start a family, money matters. You need to have a discussion whether you can afford that or you will most likely end up in debt.”

Her tips are as follows:

1. Figure out if knowing your spouses salary is important to you. If so, figure out why — do you wonder about sharing expenses, saving for a house, etc. — and if it will change your life at all to have the information.

2. Don’t have any expectations. If you learn your spouse’s salary, you can’t reply with “Well, that’s too low” or “Great! That’s high.” There is no right or wrong number in a good relationship, she says.

3. If you ask for his salary, be prepared that you may not get the information. If your spouse does say no to your request, is that a deal breaker for your relationship? “If for some reason the love of your life really does not want you to know, you’ll have to carry on in the relationship and let it go.”

4. If he flat-out refuses to let you in on his earnings, after so many years together, he may not open up to other issues either, she says.

5. If you know why you want to know — because you are wondering if he/she can help build a family, or afford child care, or buy a bigger house — she suggests that you ask those questions, as opposed to asking for his specific salary. She suggests that men may not like talking about their salaries, so talk around it: “Honey, we need a new car soon. Will be both be able to afford one?” Never be pushy!

Do you know your spouse’s salary? Do you think it’s important to know?