Why Dionne Brand Is The Alchemist Of Language

Through her storytelling and activism, the CanLit giant has always found ways to respond to and reflect the times. 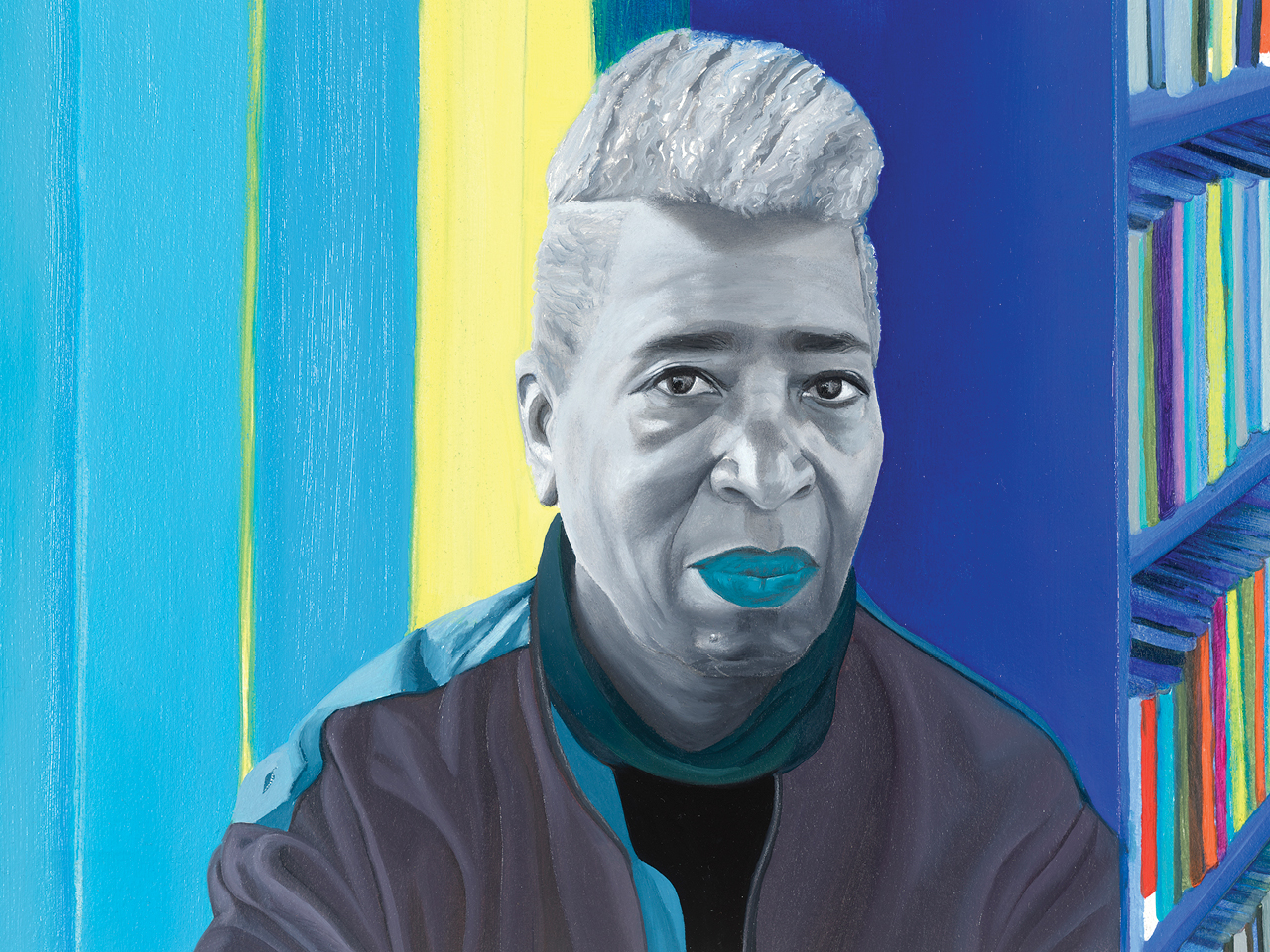 It’s a sweltering July day in Toronto and I am sitting on a café’s back patio in the city’s West End with Dionne Brand. We’re holding court on turf familiar to her, a literary giant, despite the decades that have passed.

One block away from us is Tyndall Avenue, where Brand was a member of a Black radical and creative conclave in the 1970s. Back then, she was an emerging writer, collecting bylines and accolades as a poet, author and documentarian. Those days, hanging out on a nearby patio with other Black artists, were punctuated by rich music and artistry. They were also a time for organizing and fighting—against surveillance of Black Canadians, police brutality and structural racism.

I ask Brand to jog down memory lane. “As soon as the work is produced, I just move to the next thing, and I forget about it. And I just keep moving, right?” she says. “[These are the] things I had forgotten in my haste to get as much work done as possible.”
That work has earned her a lasting legacy. Forty-odd years later, Brand is a fixture of Canada’s literary world, the author of 23 books of poetry, fiction and non-fiction (No Language Is Neutral, A Map to the Door of No Return and Thirsty, to name a few). The recipient of many awards—including a Governor General’s Award for English-language poetry and a Windham-Campbell Prize for fiction—she was named to the Order of Canada in 2017.

Today on the patio, inspired by a past of organizing and artistry, Brand and I are looking forward to her next endeavour: her new publishing imprint, Alchemy by Knopf Canada. In August, she also released Nomenclature, featuring a new poem and eight volumes of previously published works.

But looking back on her legacy, Brand is characteristically humble: “I don’t think of [where I currently am] as arrival in any way. I just survived some years.”

In person, Brand is kind and graceful. She is measured in her responses, taking time to contemplate the right words. In as much as she is thoughtful, she is emotively observant, a listener. The summer day we meet, Brand is wearing black, attracting the blazing sun. But between the two of us, I’m the one sweating. Despite the heat, I arrived with great nerves.

Brand has always loomed large in my mind. In my first encounters with her writing, she brought vitality to the untold stories of a city I’ve always called home. In the years since, Brand’s writing has greatly influenced my own work. Just a single line from A Map to the Door of No Return (“To live in the Black Diaspora, I think is to live in a fiction—a creation of empires, and also self- creation”) drew a six-year dissertation project out of me. I know I’m not alone in this; Brand has become an integral part of the canons of many Black and racialized writers.

Born in Guayaguayare, Trinidad, Brand immigrated to Canada in 1970. At 18, she published her first poem, “Behold! The Revolutionary Dreamer.” The piece ran in Spear: Canada’s Truth and Soul Magazine, a print publication centering Black cultural politics in Toronto. She wrote for Spear until it went defunct in 1987.

But shortly after Spear was formed, the RCMP created a dossier on the publication and its surrounding community, surveilling “subversive activities” among Black people. Around the same time, police officers who were charged with man-slaughter in the killing of Albert Johnson, a 35-year-old Toronto Black man, were acquitted. This led to massive demonstrations against police brutality, and motivated several Black artists and activists in the city, including Brand, to band together and form a collective.

Some of this growing collective of activists and artists would gather on the patio of filmmakers Claire Prieto and Roger McTair’s Tyndall Avenue residence. “[All of us at that time] were both community workers and artists,” Brand recalls. “Those things weren’t different. They fed each other [and] they were the same thing. That was the beginning.” Novelist Makeda Silvera and writer Clifton Joseph were some of the many other artists who passed through.

“Dionne has a capacious and sparkling imagination. Thinking with her is always a gift.”

During this early period, Brand was consumed by anti-colonial literature, reading Toni Cade Bambara, Sonia Sanchez, Amiri Baraka and Kamau Brathwaite. “I encountered all this wonderful writing about Black liberation. It just took me up—it lifted me.” Brand was also shaping her politics while reflecting on Toronto, a city growing increasingly divided, and discovering tensions along the way.

Regardless of the medium—from her first published collection of poetry, ’Fore Day Morning in 1978, to the numerous documentaries she directed with the National Film Board throughout the 1980s and ’90s—Brand picked at these tensions. In A Map to the Door of No Return, Brand unpacked the collective loss of Black histories and grappled with past stories in the present-day diaspora.

“Brand has given us maps that mark Black complexity—our laughter, our sorrow, our hurt and our joy,” author Rinaldo Walcott wrote for CBC in 2019. “In doing so, she has written the ordinary story of our Black queer existence without ever spectacularizing us as [anything] other than we might be.”

In 2009, Brand became Toronto’s third Poet Laureate. It seemed a fitting position for a woman whose work so frequently wrestled with Toronto as a landmark. Brand used her time in the role to bring art into the streets of Toronto, creating “Poetry is Public is Poetry,” a project that saw poetry posted on billboard-style panels around the city. “We want to have poetry in the moment between the doughnut shop and car dealership, speaking through the cacophony of consumerism,” she told a university alumni magazine. She remained the city’s Poet Laureate for three years before joining publisher McClelland & Stewart as poetry editor.

Her latest project, Alchemy, is another foray into the behind-the- scenes world of publishing. Conceived with Knopf publishing director Lynn Henry, the imprint aims to decentre colonial models of literature. Alchemy launches this year, with a first title to follow in fall 2023. “[Alchemy] is an old word, but it represents the various trajectories that arrive at a particular point and sort themselves into a disorderly order,” she says. Publishing fiction and non-fiction titles, the imprint will also be accompanied by a lecture series. The first lecture will take place this November, and the events will span disciplines to dissect contemporary social and political issues.

Then there’s Brand’s latest tome of poems past and present, Nomenclature. The titular poem, “Nomenclature for the Time Being,” spans 66 pages and confronts “our quotidian disasters” with narration from both a present and future perspective. (“The apocalyptic reports have come true,” it grimly opens.) “Brand’s ongoing labours of witness and imagination speak directly to where and how we live, and necessarily, reach beyond those worlds, their enclosures, and their violences,” says Christina Sharpe, Canada Research Chair in Black Studies in the Humanities at York University, of the poem in its introduction.

Sharpe will also collaborate with Brand on the Alchemy Lectures. “Dionne has a capacious and sparkling imagination,” she says. “Thinking with her is always a gift.”

Nomenclature also contains a continuum in Brand’s work: the recurring character and backdrop of Toronto. “Something has continued in terms of the city and where we currently are in it,” says Brand. The violence has found new ways to expand itself: an ever-expanding housing crisis, a recession, climate catastrophe, the opioid crisis.

But through her storytelling and activism, Brand has always found ways to respond to and reflect the times. One thread remains clear in her work: Her commitment to Toronto is her commitment to people, histories, stories and the expressions of this place and beyond. The city might try to cling to the poet and all of her magnificence, but Dionne Brand is still imagining better worlds.