The best advice Barack Obama has given his daughters

A recent piece in the New Yorker shared the poignant words the U.S. president said to Malia and Sasha after Donald Trump's win. 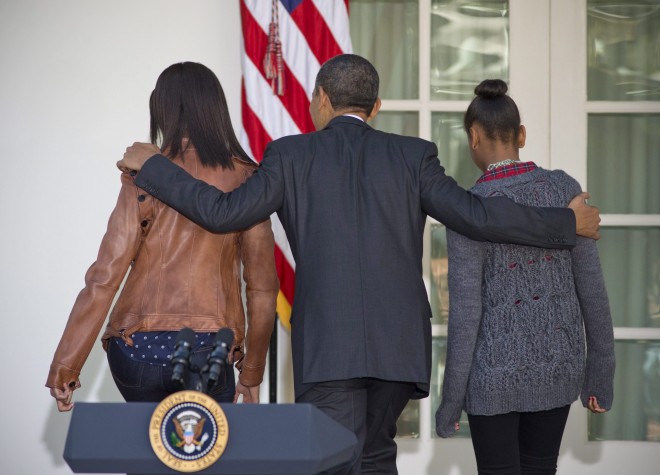 Last week, parents around the world had the tough task of telling their children that Donald Trump — a man who publicly bullied and demeaned women and ethnic minorities — won the U.S. presidential election. A slew of articles from journalists, experts and teachers flooded the internet to offer advice on what to say — Chatelaine‘s own Editor-at-large Rachel Giese suggested one meaningful thing we can all do in response to the election.

In an interview with the New Yorker, Barack Obama shared what he told his daughters, Sasha and Malia, that morning:

“What I say to them is that people are complicated. Societies and cultures are really complicated… This is not mathematics; this is biology and chemistry. These are living organisms, and it’s messy. And your job as a citizen and as a decent human being is to constantly affirm and lift up and fight for treating people with kindness and respect and understanding. And you should anticipate that at any given moment there’s going to be flare-ups of bigotry that you may have to confront, or may be inside you and you have to vanquish. And it doesn’t stop… You don’t get into a fetal position about it. You don’t start worrying about apocalypse. You say, OK, where are the places where I can push to keep it moving forward.”

This isn’t the first time Obama has offered inspiring advice for Sasha and Malia. Here are three other moments he’s been an exemplary dad:

On body positivity:
“When I was a kid I didn’t realize as much, or maybe it was even a part of which is the enormous pressure that young women are placed under in terms of looking a certain way. And being cute in a certain way. And are you wearing the right clothes? And is your hair done the right way,” Obama told Time magazine in March.“That pressure I think is historically always been harder on African American women than just about any other women. But it’s part and parcel of a broader way in which we socialize and press women to constantly doubt themselves or define themselves in terms of a certain appearance. And so Michelle and I are always guarding against that. And the fact that they’ve (Sasha and Malia) got a tall gorgeous mom who has some curves, and that their father appreciates, I think is helpful.”

On finding your potential:
In an letter addressed to his daughters after his first presidential win in 2009, Obama wrote: “America is great not because it is perfect but because it can always be made better…I hope both of you will take up that work, righting the wrongs that you see and working to give others the chances you’ve had. Not just because you have an obligation to give something back to this country that has given our family so much — although you do have that obligation. But because you have an obligation to yourself. Because it is only when you hitch your wagon to something larger than yourself that you will realize your true potential.”

More:
Why Canadians should care about Facebook’s fake news problem
The Spice Girls took down a dude who told them to show more cleavage
Racist acts made headlines this week, but so did a few good deeds