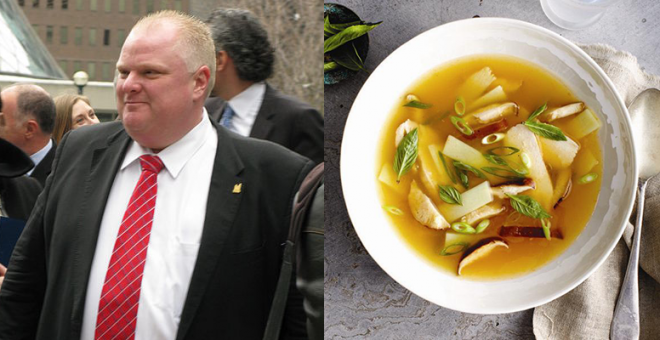 The news: Ex-Toronto mayor Rob Ford was kicked out of a city council meeting on Wednesday afternoon after he refused to apologize for leveling inflammatory accusations at city staff. The ever-controversial Ford got his tie in a twist after discovering that a $20,000 tourism trip to Italy—a move intended to drum up support for a future Toronto Expo—was missing on a recent spending report. Ford said that he found it “very hard to believe” that the omission was an oversight. Councillor Mary-Margaret McMahon called for Ford to retract his accusation, as did Speaker Frances Nunziata. Ford refused. This back-and-forth happened three times before Ford was finally asked to leave. Then Councillor (and longtime Ford ally) Giorgio Mammoliti unloaded an ideological diatribe about democratic principles (and farm animals). Politics!

The dish: A homemade hot-and-sour soup that’ll get you really fired up. Add some serrano chilies for spice—or swap in cilantro hot sauce if you’re feeling like a maverick. Get the recipe here.