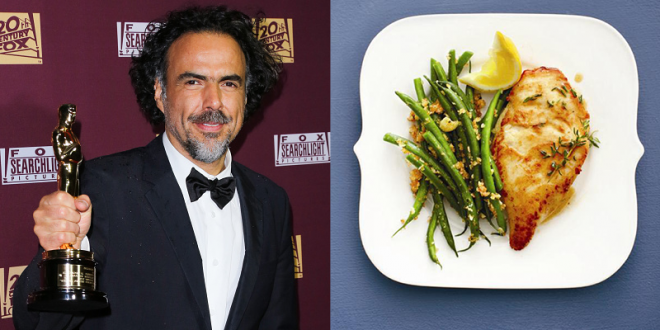 The news: In case you haven’t seen it, Birdman or (The Unexpected Virtue of Ignorance) stars Michael Keaton as a washed-up actor looking for a win. The same certainly can’t be said for the film, which snagged four awards at Sunday’s Academy Awards — those being best picture, cinematography, original screenplay and a best director statuette for Alejandro González Iñárritu. In a telecast that was widely derided as a bit on the sleepy side, Iñárritu’s immigration-focused acceptance speech was one of the night’s more politically charged moments. “Maybe next year the government will inflict immigration restrictions,” Iñárritu, referencing last year’s best director winner, Alfonso Cuaron. “Two Mexicans in a row. That’s suspicious, I guess.” Between Iñárritu and Patricia Arquette, Sunday’s Oscars ended up being an unexpectedly effective social-justice primer.

The dish: Skinless, boneless bird breasts topped with lemon juice, thyme and some celebratory white wine. Get the recipe here.