Who's got the worst commuter etiquette? Men or women?

Sleeping in public, feet up on the chair. Two new sites are documenting commuter etiquette atrocities on the daily. 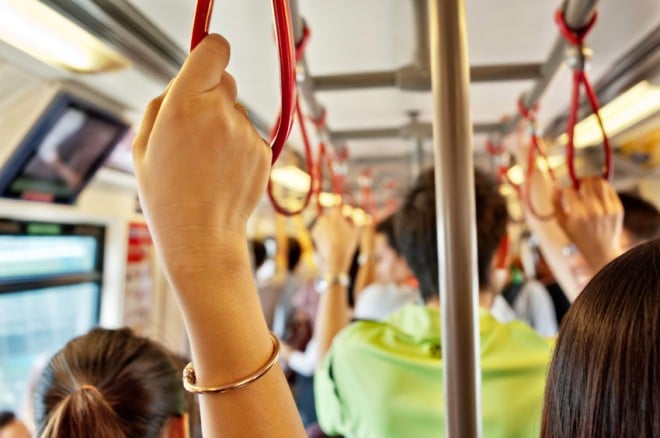 The battle of the sexes rages on, and on, and on. The reason being that men and women derive a great deal of pleasure from their fractious relations to ever quit trading pot shots and low blows. (I’m cooking up a few right now in anticipation of my husband coming home for dinner! Can’t wait to torment you, dear.)

The latest squabble has made its way online and centres on which sex deserves the title of most obnoxious public transit user. Each sex has taken their cause to the Internet, creating Tumblr pages venting their sexist spleen with catchy names such as Men Taking Up 2 Much Space on the Train and Move the F–k Over, Sis (via The Atlantic Wire).

On Men Taking Up 2 Much Space there are photos of various men, both young and oldish, riding transit with their legs spread wide in front of them, their elbows and knees rubbing up against the people beside them — physical postures that indicate a serious lack of consideration on the part of male riders for those who would presumably prefer not to feel a strange mans hairy leg against their calf.

But before the female population crowns the opposite sex king of the urban jerks, have a look at Move the F–k Over, Sis, which depicts female riders in an equally unfavourable light. Women, like men, take up a lot of space not only with their bodies (feet up on the seats) but their purses, bags and other necessities.

Taken together, the sites suggest that no single sex owns the rudeness franchise but rather share it equitably kind of like a co-op specializing in bad manners. (I can’t help but think it’s rude to photograph a stranger and post their pic online as means of outing their rudeness, too — irony alert! — but that may be because I was born before 2001.)

The lesson for us all, male, female, rude and polite: sexism is an amateur sport. Misanthropy is for those who wish to play in the big leagues.

What’s one thing people do on public transit or in airports that drives you crazy? Let us know in the comments.