Why I became a carpenter in my fifties

After her husband died, Mo Nordstrom decided to build their dream home with her own two hands. 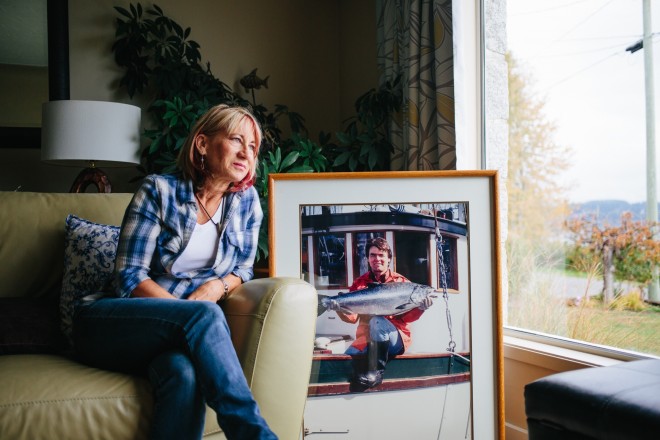 I was excited when my husband Rick and I took on the ambitious project of purchasing a fixer-upper in 2007 to turn into our oceanside dream home in Royston, B.C. Our son and daughter had recently launched into adulthood, and I had left my job to spend my late forties with Rick on his fishing boat.

We were going to move in and fix it up together, step by step. Ordering new windows to enjoy the sunny oceanfront view from our living room had us giddy. But our plans were forever altered when Rick had a seizure during one of our first reno jobs. We had only been in the house a few months when, instead of working together to create a living space in our basement, we were sitting together in various doctors’ offices, holding hands, as tests and more tests revealed a terminal brain tumour, a glioblastoma multiforme. Despite the grim prognosis, we did the gamut of treatments: holistic approaches, then chemo and radiation. Our focus shifted from renovations to spending precious time together, but we never stopped talking about the feeling we wanted to achieve in our beach house.

In January 2008, the doctors told Rick he had 18 months left. We didn’t want to believe it, but their prediction was pretty accurate. Rick passed away in May the next year, the day before my 50th birthday. He had just turned 55. In his last months, we set up the living room with a hospital bed angled toward the beach. He spent his final days looking out the window, watching the tides roll in and out as seals poked their heads out of the water, while eagles and herons swooped overhead and neighbours walked the well-worn path in front of our house. We were sitting together looking out this same window when I promised him I would finish the house. I would finish what we started.

Months after Rick passed away, I ventured into his workshop. Standing there alone staring at all his tools, I realized the enormity of my pledge. The shop was always his. He was the key player. I was support staff. I had rudimentary skills using his bandsaw and table saw, but I didn’t feel confident tackling bigger projects. Sure, I could, and did, hire contractors to help me with larger tasks, like plumbing, upgrading electrical and replacing old windows, but what I really wanted was to be more self-sufficient, to learn how to operate the tools myself.

So when I heard that my neighbour was enrolling in a six-month carpentry foundation program, I decided to sign up, too. When I first arrived at North Island College’s woodworking shop, I thought: This is it. This is where I’m supposed to be. Within four days I went from being overwhelmed and doubting my competence, to believing in myself and wanting to get straight As. The instructor had an endless supply of patience and encouragement. He didn’t bat an eye at having a petite widow in her fifties in his classroom. He patiently explained the fundamentals of residential framing, footing, wall-forming, site layout and worksite safety.

When I started, I thought I’d be the last person in the room to get hired as a carpenter. I don’t feel that way anymore. I graduated last year with the ability to look at a project and determine what’s possible, what materials I’ll need and the potential cost. I can read construction plans and navigate my personal copy of the B.C. Building Code, which I’ve referred to multiple times over the past few months as I built a garden shed in my backyard and began construction on a sunny sitting area off the kitchen. In the meantime, demolition has begun as I remove old mouldings and radiators and begin replacing doors and stair railings. It will take me a few years to finish everything on my to-do list, but my tool supply is growing along with my confidence.

More:
The baby girl I almost had
Why I reported my dad to the police
Why I told the truth about my sister’s suicide