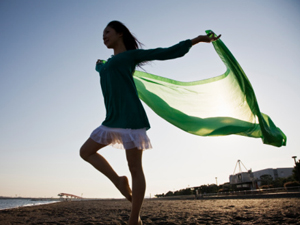 BEYONCÉ KNOWLES
What Beyoncé has given us: an icon of female empowerment; some of the most infectious pop songs ever to motivate us through the back half of our workout routines; the shapeliest show-business legs this side of Tina Turner; thoughtful interviews delivered in complete sentences; an Inauguration Night version of ‘At Last’ that left us unabashedly weeping; some questionable sartorial choices that are still delightfully entertaining and always a celebration of her honest-to-goodness womanly curves. What Beyoncé has spared us: petty feuding with fellow divas (despite the best efforts of Etta James); TMI-details of her domestic life; TMI-photographs of her waxing preferences. For all this, B., we would totally put a ring on it if only Jay Z hadn’t beaten us to the punch.

KATE WINSLET
This English Rose has reached full bloom: After losing the best actress Oscar some four times, Kate Winslet, 33, finally took home the statuette this year for her controversial role as a former Auschwitz prison guard in The Reader. But we¹d love her even without the Hollywood accolades. Winslet shines in any film, from quirky indie flicks (such as Eternal Sunshine of the Spotless Mind) to highbrow period pieces (Sense and Sensibility) and even the occasional blockbuster (like that little boat picture Titanic). Aside from being a talented actress, Winslet’s old-fashionedly gorgeous without being obsessed with her looks. She’s content to be a healthy size six and once proclaimed that she would never get plastic surgery: “I’d like to grow old with my face moving.” We can’t wait to grow old with her.

RACHEL MADDOW
Rachel Maddow isn’t the likeliest TV talk show host. For starters, she’s an out lesbian who prefers her Clark Kent glasses and Chuck Taylors to her on-air eyeshadow and pantsuits. Then there’s her PhD in AIDS activism, her nerdy obsession with American defence policy and her refusal to own a television. Still, since The Rachel Maddow Show debuted last September on MSNBC it’s been a break-out hit. In an echo chamber of bombast and partisanship, Maddow is a charming, measured and insightful voice. Admirers include David Letterman and The View’s Elizabeth Hasselbeck, as well as the editors at Vogue and Martha Stewart­ who invited Maddow on her show to discuss politics and make cocktails (Maddow’s hobby is ‘mixology’ ­ um, what’s not to love?). For reminding us that smart is sexy, Maddow has won our hearts, too.

MICHELLE WILLIAMS
We first met Michelle Williams on Dawson’s Creek­ she was a shit disturber with a string of bad haircuts. It was not, perhaps, the best introduction. But then her critically acclaimed turn in 2005’s Brokeback Mountain made us take note, as did the now-iconic canary yellow Vera Wang she wore ­ with bright red lipstick to the 2006 Academy Awards, accompanied by her fiance (and father of her child) Heath Ledger. Our feelings grew deeper, as we saw her more often: with a pixie cut and bedazzled shift at the 2007 Independent Spirit Awards; in a purple ruffled gown with and a pony-tail at the Cannes Film Festival. Williams is brave in fashion and even more so in life. “My heart is broken,” she said shortly after Ledger’s overdose last February. And dodging the ever-present paparazzi camped outside her Brooklyn home, she hasn’t spoken publicly about him since. After taking some time off to be with her adorable daughter, Matilda, we’re pleased to see Williams is acting again. Most recently, she starred in the maudlin lost-dog flick Wendy and Lucy, in a plaid shirt and modeling a DIY bowl cut. Needless to say, she still looked fantastic.