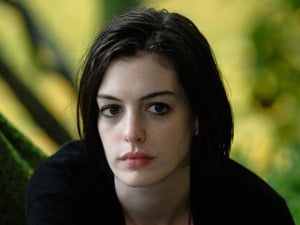 With a sawed off bob and raccoon eyeliner, the 25-year-old woman who stars in Jonathan Demme’s new movie Rachel Getting Married (in theatres October 3) bears very little resemblance to the Bambi-eyed Anne Hathaway of The Princess Diaries, The Devil Wears Prada and Get Smart. But Hathaway’s furious, against-type portrayal of Kym, a recovering drug addict on a weekend’s leave from rehab to attend her sister’s wedding, has already sparked Oscar predictions. Chatelaine caught up with the actress during the Toronto International Film Festival in September.

Q: Rachel Getting Married premiered at the Venice Film Festival and the Toronto Film Festival with rave reviews. How does it feel to have the film get so much good buzz?
A: I’m not going to lie. Two standing ovations at the world’s premiere film festivals makes for a very good week. I have to stop celebrating with champagne though.

Q: Kym is a real departure from your previous roles. Were you looking to play a character like this?
A: Meryl Streep says that you must always do the best work you can with the material that’s available. But this kind of role is the reason I became an actress. Of course I’ve loved the rest of my career. But you don’t get characters like Kym every time. I’m proud of my own work in this and I’ve never ever been able to say that to myself before.

Q: How did you feel when you saw the film?
A: I hope it doesn’t make me sound conceited, but I’m really, really satisfied. I worked very hard on this character for a year. To have my intentions represented on screen exactly as I imagined them is overwhelming.

Q: Was it tough getting into this character?
A: From the second I read the script, Kym and I were locked together. I just knew who she was and how she felt. I didn’t have to torture myself to figure her out. It was never about me. It was always about her and she made sense to me. I think one of the toughest things is when you read a script and it tells you that the character cries and you have no idea why she’s crying, because the character hasn’t earned it. Kym’s earned everything she has, the good and the bad. Kym doesn’t have a filter, but I do. She’s really true to herself. Her attitude is: You either like me or you don’t, but I’m just me. I really loved the freedom to play that [kind of woman].

Q: She seems so different from who you are.
A: I know, doesn’t she?

Q: But is she?
A: She’s closer to me than anyone has ever thought.

Q: You seem very happy right now and at ease. Is this because of the film, or because of getting older?
A: I’m sure it has a lot to do with my age. For the first time in my life I’m really comfortable in my skin. I was preoccupied with the fact that I was an actress but I didn’t feel that I could call myself one. I hadn’t done anything yet to earn that label. Now I’ve done something that I believe in and feel fulfilled by and there’s a clear delineation in my life of before I did this film and afterwards.

Q: Where do you go from here?
A: I went 180 degrees in the opposite direction. I just made a movie called Bride Wars with Kate Hudson. It’s the glossiest and most commercial thing I’ve ever seen!