The former captain of the Canadian Olympic women's hockey team, Cassie Campbell is taking her brawn and brains where no woman has ever gone before: straight into the Boys Only club of Hockey Night in Canada 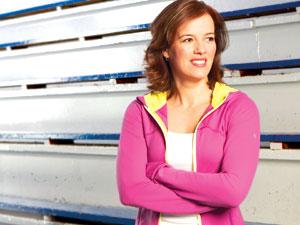 At 7:55 p.m. Mountain Standard Time on March 24, Cassie Campbell of Hockey Night in Canada appears on camera at rinkside in Edmonton’s Rexall Place, to interview Craig MacTavish, the coach of the Edmonton Oilers, who in five minutes will begin their game against the visiting first-place Nashville Predators. An astute TV observer might note that although “O Canada” is playing in the background, the stands around Campbell and MacTavish are deserted. The segment was actually taped two hours earlier.

The poise of the 33-year-old Campbell is obvious to anyone, the essence of unaffected professionalism. She’s wearing a tailored chocolate-brown blazer, her hair is a bit shorter now and a shade more russet than it appears in person, her trademark exuberance a tad less bouncy. “Craig,” she says, “you’ve started backup goalie Jussi Markkanen tonight after regular goalie Dwayne Roloson had a really great game for your team. What would be your philosophy with your goaltenders these last few games?”

MacTavish, suave as ever, launches into his answer, and as the brief interview continues, two things are obvious: the coach’s respect for the interviewer, and Campbell’s intensity and deference as she holds the microphone up to him. The segment lasts exactly 77 seconds. Everything seems to have gone routinely, but, in fact, Cassie Campbell has just accomplished something unique, gender-wise, in this country. As a woman, she’s ventured into Canadian broadcasting’s terra incognita, its final female frontier.

A few months after announcing her retirement from the already storied Canadian women’s national hockey team last summer, Campbell, who was its captain and one of its long-time stars, was hired to work on the CBC’s Hockey Night in Canada, initially as a rinkside reporter and interviewer during telecasts. At the time only two other women had ever appeared onscreen in the history of HNIC, and both of those were professional broadcasters. She was the first female hockey player to hold forth on the show, arguably the most iconic institution on Canadian television.

Then came October 14, 2006. Veteran colour commentator Harry Neale was snowed in in Buffalo and Campbell replaced him in the broadcast booth beside Bob Cole for a Toronto-Calgary game. No woman – player, or otherwise – had ever pulled off this feat. In the process, Campbell became a pioneer: a woman sports star doing commentary on her male counterparts. A girl talking about guys playing hockey.

That Cassie Campbell should be the woman to break the ice ceiling at Hockey Night in Canada, one of the last bastions of male-driven Canadian culture, is no fluke. She has paid her dues. In 13 years with the women’s national team, Campbell won 21 medals in international and Olympic competition, 17 golds and 4 silvers, and had 100 points in 157 career games. Her style throughout was grounded in tenacity and desire. “I see myself as a combination of Ryan Smith and Mike Peca,” she says, referring to two highly respected current NHL players known for both skill and grit. “Ryan Smith because of his heart and passion for the game, and Mike Peca for his versatility: the ability to play on the power play, the penalty, wherever you’re needed.” Hayley Wickenheiser, a national-team teammate and the highest-scoring female player in Olympic history, concurs. “Cassie was a tenacious two-way player, a good skater and forechecker. Mind you, she also did a lot of singing and dancing around the dressing room; she was definitely our team’s best candidate for Canadian Idol.”

That dressing-room social-director image of Campbell is as revealing as her passion on the ice. Leadership comes naturally to her. “On virtually every team I played on, I was captain,” she notes, referring not just to the national team but to her minor-hockey days in Brampton, Ont., and her college hockey career with the University of Guelph Gryphons. “Cassie’s leadership style,” says Melody Davidson, the current national-team coach, “is based on emotion on one hand, and a business-like attitude on the other, and knowing when it’s time for each. She’d begin every conversation I had with her by saying, ‘I’m here as the captain, representing the team,’ or ‘I’m here as myself,’ and I could trust that we’d be having two different talks. With Cassie it was always very clear.” It was that clarity of vision, along with her joy in the game, and, yes, her open smile that has elevated Campbell, over the course of a decade, to “poster girl of women’s hockey,” the face of the game that everyone knows.

“Cassie’s a huge star in this country,” says Joel Darling, HNIC‘s executive producer. “Not just the fans know who she is, but the NHL players know her, and they know she’s played the game at the highest level. This gives her a lot of credibility.”

Ironically, if NHL stars are impressed by Campbell’s bona fides, Campbell is star-struck by theirs. “One thing I’m getting better at is being comfortable around these players. I’m still in awe of a lot of them. Interviewing people like, say, Peter Forsberg, I’m so interested in them that I have to work to get comfortable with them. The fan in my mind is always there. My first game, I was just as much in awe and nervous to be on Hockey Night in Canada. And I’m not the only one; it’s a continuum of awe. For a lot of the players I’m interviewing, it’s an honour just to be on the show.”

Just over 12 minutes into the first period, at 8:30 p.m., Campbell does her first solo hit, an item from the stands – there’s plenty of ambient crowd noise now – about Nashville’s two goalies, neatly picking up on her theme from the MacTavish interview. Her folksy “And you know what?” contrasts nicely with the segue. Eight minutes of game time after that, with Nashville leading 1-0, she does her first intermission rinkside interview, with the Edmonton rookie Tom Gilbert. One more solo at the 13-minute mark of the second period (a surprisingly moving item about Greg Johnson, Nashville’s former captain, sidelined this year with a heart condition), then comes another intermission interview, this time with Vernon Fiddler of Nashville, a “hometown boy,” Campbell points out, who manages to use three clichés in the space of two sentences.

“How many tickets did you have to buy?” asks Campbell, referring to tonight’s game, “and how much did it cost you?” The first question is funny and collegial, but the second one is purely a fan’s query: How much do these guys have to shell out, anyway? Fiddler says something about not being able to put a price on it, and Campbell announces the score, 3-1 Nashville, and throws to intermission hosts Scott Oake and Kelly Hrudey in the studio.

Except the score isn’t 3-1; it’s 3-0. It’s the first stumble she’s made all broadcast – one she’ll later call “a key mistake.” (“But it happens,” she’ll add.) It’s interesting how tough she is on herself, especially when you watch, by comparison, a tape of her most famous broadcast to date, her emergency stint as colour analyst last fall, a scant two months after her retirement as a player.

The difference is marked; where she’s incisive now, earlier she wandered; where she’s confident now, what she had back then was mainly the will of a trouper. The reviews after that momentous game were decidedly mixed, but even the negative ones, tellingly, were respectful. “My teammates were actually more upset than I was,” she says. “And my father. I tried to tell my dad that whether you’re an athlete or in front of a microphone, what the media says has to mean very little to you. You know the real story, I told him. You know the real person. This is not real.”

Besides, that was then, this is now. “The thing I’ve learned the most is to just be more comfortable. That and to learn to listen. Not just to the voice talking in my earpiece as I’m trying to listen to the answer someone’s giving me, but listening, intently, to the answer, instead of thinking of my next question or where I have to throw to. Because one of these days a player’s going to say something like, I’m retiring tonight, and I’d like to pick up on that.”

In the last two interviews she does tonight, that attentive concentration is evident. One of the interviews is with the aforementioned Peter Forsberg, the game’s first star, who recently waived a no-trade clause in his contract with the Philadelphia Flyers in order to join Nashville. In the course of discussing the goaltending situation on his new team, Campbell gets him to say, “I’m not going to answer that question,” ruefully, twice, a coup for any journalist.

Her youthful keenness onscreen is strong enough that it’s easy to forget what an accomplished adult she already is in her own right in the other avenues of her life.

Campbell’s currently co-writing two books, one a children’s book called Heart, which centres on stories from her national-team career, the second an adult motivational book, using the same background to discuss the unique demands and travails of teamwork. Those stories form the content of the talks she gives to business groups in her capacity as an increasingly in-demand public speaker. As a bonus, she spends her summers in P.E.I., where her roots go back to the author Lucy Maud Montgomery.

But now she’s climbing a different mountain. If the faces on the nation’s TV screens on Saturday nights have changed over the years – from Foster Hewitt to Ward Cornell, from Dave Hodge to Harry Neale, to Don Cherry and Ron MacLean – one thing has been consistent: the testosterone level. Now, though, it’s possible to envision a Saturday night when the voice in our ears or even the face on Coach’s Corner, the program’s signature intermission show, belongs to a woman. And who better than a woman with unassailable Canadian credentials, who not only has won Olympic gold for the true north strong and free, but whose family maintains the Anne of Green Gables Museum in Park Corner, P.E.I.?

It’s 11:00. The game at Rexall Place is over, as is the broadcast. Campbell joins Kelly Hrudey and Scott Oake, hops into a cab and heads back to the hotel. In the morning there will be a very nice e-mail waiting on her computer from producer Joel Darling. He will be extremely complimentary about her performance the night before, but he won’t mention that she got the score wrong. Campbell will note that he should have.