Words of wisdom from the multi-talented Jocelyn Palm

Recently awarded the Order of Canada, the long-time camp director shares why she enjoys a challenge and the greatest reward in her job. 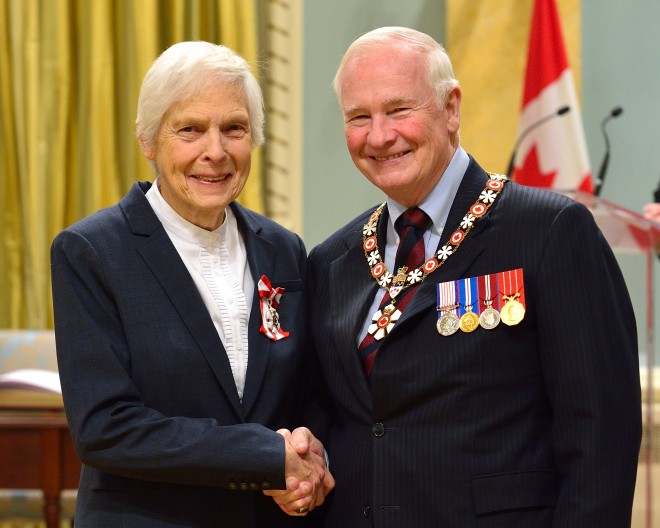 His Excellency the Right Honourable David Johnston, Governor General of Canada, presents the Member of the Order of Canada insignia to Jocelyn Palm.

When I was 19, I taught sailing at Glen Bernard Camp in Sundridge, Ont., which was owned then, as it is now, by Jocelyn Palm. This year will mark Joc’s 37th as the director of the girls’ camp, an achievement for which (along with her unwavering commitment to the environment and her longstanding role as a champion of women’s health) she was recently awarded the Order of Canada.

Back then, though, she was simply someone I admired and, ever so slightly, feared. (She was, after all, my boss.) Over the eight summers that I worked at GBC, Joc never failed to inspire in me the urge to try new things, to find my own way, to lead when my first inclination was to follow. On one of those occasions, I was teaching a handful of nine-year-olds how to sail an Albacore. It was a big bathtub of a boat, safe but unwieldy. The morning was breezy and the wind picked up considerably as I prepared to return to shore. Without warning, the boat lurched and the sails flapped wildly — the mast had become unstepped, and was now bobbing alarmingly in its splintered wooden casing.

In a smaller boat, I might have been able to reach forward to uncleat the ropes and lower the sails, signaling to those on shore that we were in trouble. But I didn’t dare let go of the tiller to try, and the ropes, pulled taut by the unanchored mast, proved too difficult for little hands to undo. The kids all stared at me with wide eyes, skinny arms hugging their life jackets tightly against their chests. They were frightened, and so was I.

If the boat tipped not only would we all spill into the cold, inky water, but there was also a good chance the Albacore would turtle, making it next to impossible to right. The only thing I could do was keep the bow of the boat pointing into the wind and hope that someone on shore would notice our predicament. It took all my strength to tug the tiller back every time a gust or wave jostled us out of position. I wanted to cry. What I did instead, was sing. For what seemed like an eternity, I lead the campers through every camp song I knew, all the while watching as the rest of the boats went in and the beach cleared as everyone headed off to lunch. We kept on singing.

I promised the girls that Joc would rescue us and, sure enough, her red Zodiac appeared (she wasn’t the national director of the Royal Life Saving Society of Canada for 15 years for nothing). I was immensely relieved, but also figured I was fired — somehow, I’d broken one of her boats. But Joc couldn’t have been kinder. I can’t recall how she got us to shore, only that she did. What I do remember was how she told me later that she’d expected to pull up to a boatload of crying campers. Instead, she found us halfway through the second verse of “You Are My Sunshine.” I still remember how I felt when she told me she was proud.

Over the years, Joc has shepherded more than 200,000 young women along the well-trodden paths at GBC. And she always has some wisdom to share — we called them Jocisms — one of which is “Lead, follow or get out of the way.” Now, in light of her latest achievement, she shares more of her thoughts on becoming a leader and why camp is so important. 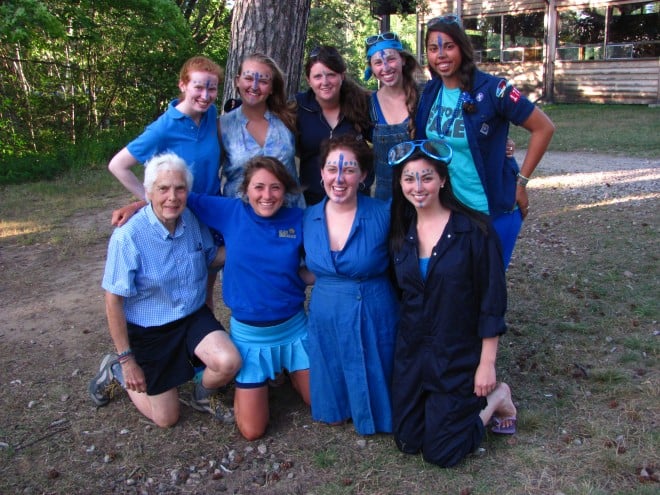 Q: What inspires you most about working with kids?
A: When kids do something they didn’t know they could do, which I often see while watching them in the high ropes course. Afterwards, I’ll sit with them at lunch and I’ll say, “Wow, I saw you on the ropes this morning – that was terrific!” And they don’t say anything, they just get a little smile on their faces and breathe in and sit up a little straighter. You know they’re proud of themselves.

Q: How do you explain the importance of camp to people who’ve never been?
A: Camp gives you an opportunity to discover yourself, to figure out who you are and how you interact with others. If you go on a canoe trip, you learn to look after yourself and find your way, but you also work with a group that doesn’t have the same skills or likes as you do. I believe children learn to make decisions by making decisions. We just need to let them try. Nobody’s supposed to fail anymore, yet that’s totally ridiculous. At camp, I figured out who I was. To me, that’s it. You learn to be independent. I feel strongly that we have to help young people acquire values that will help get them through life — and camp does that.

Q: What is the greatest reward in your job?
A: I get a charge out of seeing former campers succeed. They’re all out there thriving, and I think their camp experience hasn’t been lost in all of this. It’s not the be all and end all, but it’s sure a great step along the way.

Q: At GBC, you’ve installed composting toilets, solar water heaters, even a solar-powered boat. Wouldn’t it be easier (and cheaper) to go the more conventional route?
A: Yes, but if I’m not prepared to be a role model and show kids the technologies that are going to make our environment sustainable, who’s going to do it? I get a laugh when parents say, “Well, thanks a lot Joc — because of you we had to have solar power at our cottage.”

Q: I addition to your work in camping and environmental education, you’re also the president of the volunteer association at Women’s College Hospital in Toronto. What motivates you to take on so many challenges?
A: Challenge itself motivates me. If you’re looking for tenacity and gut work, I’m your person. When a problem arises, I think, “Okay, there’s always another way to do everything, so what’s my alternative?”

Q: What’s your best advice?
A: Set realistic goals and, once you’ve achieved them, set more.

Q: Do you have a bucket list?
A: People always ask, “What are you going to do when you retire?” Well, I’m not retiring, so I don’t need a bucket list. But, if pushed, I’d like to go to the Galapagos to take photos. I’m sort of an amateur photographer.