Why you need to stop being the office mom

Women are more likely to wind up doing low-level tasks, no matter how senior they get. Those office chores are stifling female leaders. 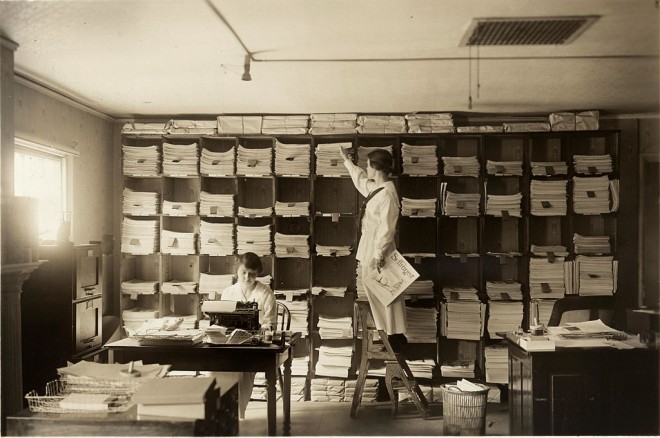 Photo, The Library of Congress/Wikimedia Commons.

Female entrepreneurs have an image problem. The data shows that across sectors and geographies, women run fewer, smaller and less profitable businesses than men. In the world of entrepreneurship, where no principle is as revered as growth, this leads to all sorts of silly speculation that women aren’t suited to empire building. That’s nonsense, of course; there are plenty of hyper-ambitious women out there running successful ventures. (Just take a look at this year’s winners of the W100.) But it is true that there aren’t enough of them, hence the perception that female entrepreneurs are more dilettantes than titans.

This matters because that perception is harmful when it comes to things like finding money, hiring employees and winning clients—you know, the things it takes to create a successful business. Here’s an example that represents the kind of biases female entrepreneurs face: In a much-discussed Newsweek feature earlier this year, author Nina Burleigh recounts the withering rejection one female tech entrepreneur got from an investor: “I don’t like the way women think. They haven’t mastered linear thinking.” It’s a maddening, untenable, deeply sexist situation, and those working to eliminate the structural causes of the gender gap deserve great credit.

The good news is that there’s something female leaders can do—or, more accurately, stop doing—right away to help debunk the stereotype that women are somehow second-rate business people, and it means simply declining to accept “chief cook and bottle washer” as an addition to actual job titles.

With the standard caveat that sex-based generalizations are just that—generalizations—almost all the research suggests that, by and large, there are real differences in how men and women lead. While many of the traits commonly associated with women (empathy, collaboration, attention to detail) are assets when running a business, a big one—the tendency to be too hands-on in operational concerns—is decidedly not.

In their meticulously researched New York Times series (1, 2, 3, 4) on women in the workplace, Facebook COO and Lean In author Sheryl Sandberg and Wharton School professor Adam Grant argued that high-powered women are spending too much time doing menial tasks around the office—everything from booking boardrooms to baking cupcakes. “Someone has to take notes, serve on committees and plan meetings,” the pair wrote, “and just as happens with housework at home, that someone is usually a woman.” The reasons for this are both extrinsic (read: antiquated expectations of gender behaviour) and intrinsic (read: an inclination among women to want to help), and it results in female executives wasting time and missing opportunities.

Sandberg and Grant focused most of their attention on corporate ladder climbers, but this phenomenon is as damaging—if not more so—for entrepreneurs. Most business owners admit to having difficulty in letting go of day-to-day tasks, but women seem to have an especially hard time with it: In a 2013 survey of female entrepreneurs, only 26% considered themselves to be excellent delegators.

This is far too low. While taking a personal interest in office minutiae may ensure everything is as it should be (while simultaneously setting up some serious “we’re all in this together” warm fuzzies), it’s a pretty terrible use of time for someone whose job description is, essentially, to guarantee the viability of the enterprise. Every minute spent doing a menial task is one not spent on vital strategic work.

That’s not to suggest anyone should ignore the details. Great entrepreneurs are able to concurrently manage the macro and micro affairs of their businesses; it’s just that “managing the micro” should mean “strategically deputizing,” not “making the damn coffee.” If more female entrepreneurs stopped attending to the small stuff everyone expects them to do and devoted that energy to work that truly grows the business, it might help quash the ridiculous fallacy that they are somehow second-tier.

Related:
How one woman succeeded by embracing failure
Organize your work inbox with these 6 steps
Want a raise? Learn to negotiate like a boss

Join Chatelaine and PROFIT at the W100 Idea Exchange to meet, network and learn with Canada’s Top Female Entrepreneurs. Whether you’re a seasoned leader or just starting out, this one-day summit will help you develop the leadership skills needed to build a more profitable and personally fulfilling business.

Secure your spot on June 5 at the Ritz Carlton in Toronto — Register today!