Publishing powerhouse Ken Whyte (virtually) takes magazines to a whole new level with his latest venture. He shares what he’s learned on his journey from janitor to media magnate. 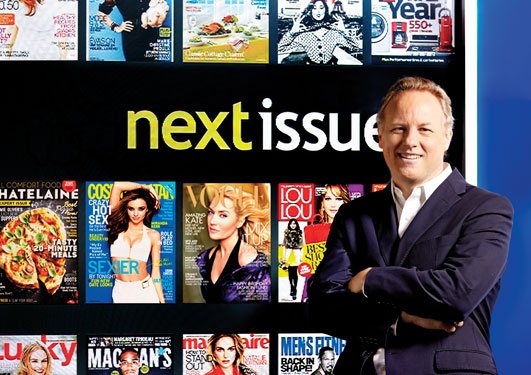 Ken Whyte is one of Canada’s most influential (and infamous) publishing masterminds. He served as editor of Saturday Night magazine before moving on to launch the National Post. He recently left his role as president of Rogers Publishing (who publish Chatelaine) to head up Next Issue Canada.

1. My career didn’t begin conventionally. I was working as a janitor in Edmonton and I dropped out of school for about the third time. I started looking through the want ads because being a janitor was okay, it paid, but I figured I had to do something more. I saw a job for a sports reporter at a little newspaper outside of Edmonton, and it seemed like so much more fun than what I was doing. I got home and I couldn’t sleep. I was just captivated with the idea, so I drove out to Sherwood Park and waited for the place to open in the morning. I knocked on the door and happened to be the first person to apply. I got a tryout and I’ve loved every minute of the publishing business since. There’s been bad times and good times, but I’ve never regretted it. I never doubted it.

2. The unknowns are what make start-ups attractive. You’re beginning with an idea and a hope, and you’re trying to engage an audience in a new way. That’s inherently exciting. And if you’re adventurous in your career, which I think everyone should be, it’s good to do that once or twice.

3. New businesses always come with a little bit of dread. Is the idea a good one? Is this its time? Are you too early? Too late? If there wasn’t the unknown, it wouldn’t be that much fun. I don’t think there’s been anything in the magazine industry that has had the same impact as Netflix for TV or iTunes for music. I think Next Issue has the potential to have that kind of impact. And that’s really, really exciting.

4. We don’t talk or teach about failure enough. Failure is the most common thing in your career, no matter who you are. I was once at a gathering of professional hockey coaches at the end of a season, and it took me a while to figure out that there was only one guy there who had been a success that year. Everyone else had failed, and that’s true of most things in life. Only one business can be the very best. There’s one Apple out there at the moment; everyone else is second best. There’s only one CEO at a company. That’s the reality. It’s really important to have some failures, the bigger the failure the better, because then you find out — well, it didn’t kill you. It sounds corny, but it’s actually true.

5. I’ve always taken failure very personally. I once had a bad cover story that I put on Saturday Night magazine when I was editing it. I knew it was a mistake almost the moment it went to press. Because it was a monthly magazine, I had to stare at it for 30 days. At one point I just got into the car and started driving. The next thing I knew, I was in Louisville, Kentucky — anything to get away from that cover. But that was early in my career. I’ve gotten better at living with my mistakes. I felt that I let myself down, other people down, that I wasn’t good at what I did.

6. When I was starting out, I thought success was about getting the job or winning awards. But after you’ve been doing it for a long time, the only things that really stick in your mind are the people and the experience you’ve had with them — the joy of doing good work with good people. Probably the best thing of all is being able to help a really talented, ambitious person find an opportunity to express themselves; that feels like success at the end of the day for me.

7. Teams are very human things. I don’t believe in going by work charts or strict job descriptions. I just look for really good, talented people. I put talent above all else. Secondarily, I look for people I want to work with, who share the vision, the passion, who I think will feel a sense of congeniality and common purpose. And people who have the passion, you don’t have to ask them a lot of questions before it bubbles to the surface. You can always figure out how to get all the work done.

8. Two things I’ve noticed about working with women: One is I find men are far quicker to put themselves forward for opportunities. The second is that a lot of the women have been more talented than the men, but they have not been as assertive in seeking leadership opportunities and in speaking their minds. I’m not the only one who’s noticed that. It’s unfortunate. I think — and I’m going to get crucified for this — there’s a lot of woman-on-woman violence in the workplace, more so than man versus man in my experience. I think that women would benefit from a more supportive style of collaboration.

9. Male or female, I’m inspired by people who love what they do and are always trying to push to do something better. I’ll watch anything on TV that Aaron Sorkin does, because he’s smart and ambitious, and he can be tiresome sometimes, but he’s always trying to do a little bit more. I love reading Michael Lewis, the Moneyball guy. There’s a whole bunch of journalists and writers I admire, the list is so long .

10. I admire Martha Stewart a lot. Think of domesticity before Martha came along, and it was almost like a dirty little word. But she taught a generation of women how to be comfortable — even a little ambitious and aspirational — in their domestic lives, which wasn’t a message we were accustomed to hearing. The way that she built an empire while being true to her vision of domestic life and herself is pretty impressive.

Newstand in your pocket: The Next Issue app gives you unlimited access to some of the most popular magazine titles. It’s available now for Rogers subscribers and nationwide December 15. From $9.99.