Every year in Canada, 200,000 women are assaulted by their partners. Here's how one survivor is fighting back 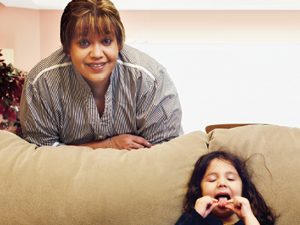 How she gives back:
A mother of two who has spent nearly 20 years working with abused women and children, Troniak is the executive director of First Step Women’s Shelter, an emergency shelter in Sioux Lookout, Ont. First Step serves surrounding Northern Ontario communities and 26 nearby Aboriginal reserves. “We’re very busy: Last summer our occupancy rate was 110 percent,” she says.

Why she cares:
As a child, she sought refuge in an emergency shelter with her mother and sister. “My mom married a man – my stepfather – who was abusive, and we went into the shelter system a couple of times,” Troniak explains. “She left him eventually, and after she did, life was good. But that experience stays with you.” Does it ever: Early in her second marriage, Troniak found herself in her mother’s situation. “I picked the same kind of man. There was a lot of wondering, âWhy did I do this?’ A lot of self-reflection.” Now she shares her story to inspire women to believe their lives can change. “It helps to know that you can go through this and still come out of it.”

Her journey:
Troniak began with a secretarial job at the Faye Peterson Transition House in Thunder Bay. “I just knew that was where I wanted to be. I don’t think I could have worked anywhere else.” Soon she was helping with bookkeeping, hustling after hours to upgrade her skills: First she took accounting classes, then human-resources courses, becoming the shelter’s finance manager and executive assistant to the board of directors. In whatever spare time remained, Troniak volunteered her expertise at other local shelters. Two years ago, one of those shelters, First Step, contacted her about the executive-director position.

Her mission:
Her Métis heritage makes the health and welfare of Aboriginal women – who are three times as likely to experience spousal violence as non-Aboriginal women – a personal crusade. “I have seen the discrimination that Aboriginal women face,” she says. “I can’t fix it, but I hope what we do at this shelter will give them support that they’ll keep forever.”

A difficult philosophy:
Troniak respects a woman’s right to choose – even when it’s to return to an abusive situation. “No matter what, you have to encourage people to make decisions that they are comfortable with. It’s just human to want to give a relationship one more try.” Women who do go back are given a parting hug and reassurance that they will always have a safe place to stay.

A hefty to-do list:
“There need to be more advocates in the courts for domestic-violence cases. There needs to be more education in the courtroom: Lawyers and judges have to understand that a woman may not be able to get up on the stand and tell them everything her partner did to her. And if she does, he may only get six months probation. He needs to be put into jail. There are a lot of things we have to get done.”