The Virgin Cure by Ami McKay

Our first official Chatelaine Book Club pick: A gut-wrenching new novel about lost childhood set in 1870s New York from the author of The Birth House. Leave a comment to receive a copy (while quantities last). 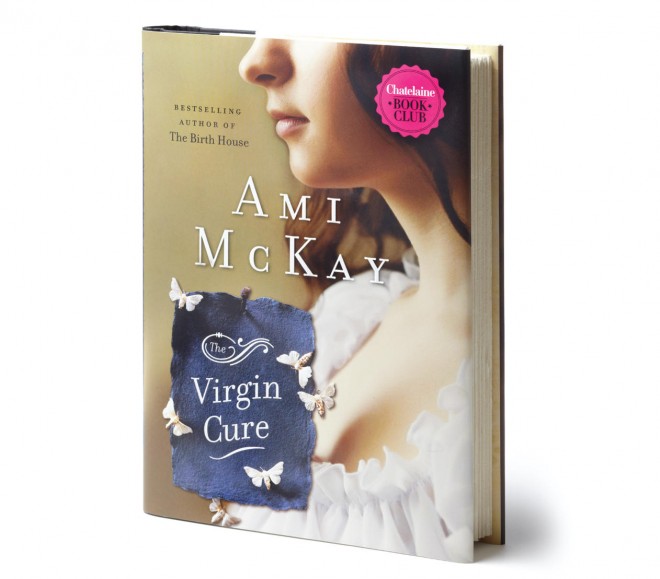 The hook: An intriguing story of a spirited girl and the female doctor who tries to save her from a “fate worse than death,” which will ruin her reputation in 19th century Manhattan. It’s a place of extreme wealth and utter poverty where beautifully dressed society women and men collide with an underworld of homeless children to whom even a stolen apple can mean the difference between life and death.

The plot: Think female Oliver Twist. When 12-year-old Moth is sold into service by her mother, Moth realizes she’s never truly been loved. Her new employer is an eccentric with peculiar demands whose abuses quickly escalate: “She took to slapping me across the face, turning the large agate ring she often wore to the inside of her hand before letting loose her anger. ‘You need discipline,’ she’d explained over my tears, ‘if you wish to become the perfect maid.’” Moth runs away with the assistance of a sympathetic butler and finds herself on the cold, sinister streets of the Bowery, facing starvation and the unwanted attentions of thieves and beggars. After a near-rape, she’s rescued and introduced to the keeper of a brothel of a most particular kind, where young girls are prepared for men willing to pay substantially for “clean” virgins. Naive on the one hand, pragmatic on the other, Moth, like many before her, weighs a life on the streets against a full belly and decides to accept the madam’s o er. As one of the girls says, “Who knew heaven was a brothel?” But the kindly Dr. Sadie, who attends to the girls’ health, knows what lies in store for those like Moth and tries to convince her there are other paths to choose from — albeit not nearly as seductive.

The inspiration: A portrait of Ami’s great-great-grandmother, Sarah Fonda Mackintosh, hung above the piano in their family home in Indiana and enchanted her when she was little. Sarah was one of the first female doctors in New York and specialized in women’s and children’s health. “She was doing something completely outside of her family’s social class and beyond the boundaries of acceptability at the time. It was extremely bold and courageous,” says Ami. “Working in the New York tenements was such a stark contrast to the life she had growing up,” she adds. “I was compelled to fi nd a way to weave that into my work.” Ami’s research into Sarah’s life became the backbone of her novel.

Talking points: Women’s and children’s rights, 19th-century social mores, New York tenement life, the history of medicine and the still-held belief, mainly in sub- Saharan Africa, India and Thailand, that having sex with a virgin will cure men of sexually transmitted diseases.

Book giveaway! Sign in and leave a comment before Friday October 28 at noon and tell us why you love Ami for a chance to receive one of five copies (while quantities last) of The Virgin Cure.