Book excerpt: A.J. finds a note with the abandoned toddler

A grieving bookseller finds an orphaned child in his store one night and makes a momentous decision. 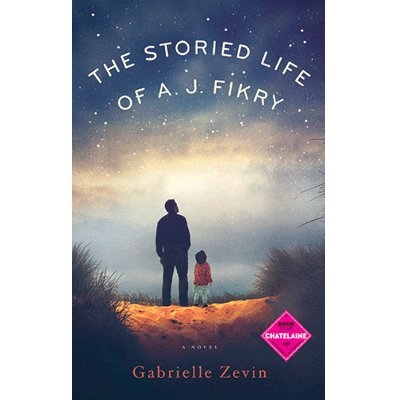 A.J. looks from the book to the old woman. “What was your problem with it?”
“Problems, Mr. Fikry. To begin, it is narrated by Death! I am an eighty-two-year-old woman and I do not find it one bit pleasurable to read a five-hundred-fifty-two-page tome narrated by Death. I think it is a remarkably insensitive choice.”
A.J. apologizes but he is not sorry. Who are these people who think a book comes with a guarantee that they will like it? He processes the return. The book’s spine is broken. He will not be able to resell it. “Mrs. Cumberbatch,” he cannot resist saying, “it appears that you read this. I wonder how far along you got.”
“Yes, I read it,” she replies. “I most certainly did read it. It kept me up all night, I was so angry with it. At this stage of my life, I would rather not be kept up all night. Nor do I wish to have my tears jerked at the rate at which this novel jerked them. The next time you recommend a book to me, I hope you’ll keep that in mind, Mr. Fikry.”
“I will,” he says. “And I do apologize, Mrs. Cumberbatch. Most of our customers have rather liked The Book Thief.”

Once the store is closed, A.J. goes upstairs to change into his running clothes. He leaves through the bookstore’s front entrance and, as has become his custom, does not lock the door.
A.J. had run cross-country on his high school’s team and then at Princeton. He picked up the sport mainly because he had no skill for any other sport aside from the close reading of texts. He never really considered running cross-country to be much of a talent. His high school coach had romantically referred to him as a reliable middleman, meaning that A.J. could be counted on to finish in the upper middle of any pack. Now that he hasn’t run for a while, he has to concede that it had been a talent. In his current condition, he can’t make it more than two miles without stopping. He rarely runs more than five miles total, and his back, legs, and basically every part of him hurt. The pain turns out to be a good thing. He used to pass his runs by ruminating, and the pain distracts him from such a fruitless activity.
Toward the end of his run, snow begins to fall. Not wanting to track mud indoors, A.J. stops on the porch to take off his running shoes. He braces himself on the front door, and it swings open. He knows that he didn’t lock it, but he is reasonably sure that he didn’t leave it open. He flips on the light. Nothing seems out of place. The cash register doesn’t look molested. Probably, the wind had blown the door open. He flips off the light and is almost to the stairs when he hears a cry, sharp like a bird’s. The cry repeats, more insistent this time.
A.J. turns the lights back on. He walks back to the entrance and then makes his way up and down each aisle of the bookstore. He comes to the last row, the poorly stocked Children’s and Young Adult section. On the floor sits a baby with the store’s lone copy of Where the Wild Things Are (one of the few picture books Island even deigns to carry) in its lap and opened to the middle. It is a large baby, A.J. thinks. Not a newborn. A.J. can’t clock the age because, aside from himself, he has never really known any babies personally. He was the youngest child, and obviously, he and Nic never had any of their own. The baby is wearing a pink ski jacket. She has a full head of light brown, very curly hair, cornflower blue eyes, and tan-colored skin a shade or two lighter than A.J.’s own. It’s rather a pretty thing.
“Who the hell are you?” A.J. asks the baby.
For no apparent reason, she stops crying and smiles at him. “Maya,” she answers.
That was easy, A.J. thinks. “How old are you?” he asks. Maya holds up two fingers.
“You’re two?”
Maya smiles again and holds up her arms to him. “Where is your mommy?”
Maya begins to cry. She continues to hold out her arms to A.J. Because he can’t see his way to any other options, A.J. picks her up. She weighs at least as much as a twenty-four carton of hardcovers, heavy enough to strain his back. The baby puts her arms around his neck, and A.J. notes that she smells rather nice, like powder and baby oil. Clearly, this is not some neglected or abused infant. She is friendly, well dressed, and expects — nay, demands — affection. Surely the owner of this bundle will return at any moment with an explanation that makes perfect sense. A broken-down car, say? Or perhaps the mother was struck with a sudden case of food poisoning. In the future, he will rethink his unlocked-door policy. Though it had occurred to him that something might be stolen, he had never considered the possibility that something might be left.
She hugs him tighter. Over her shoulder, A.J. notices an Elmo doll sitting on the floor with a note attached to his matted red chest by a safety pin. He sets the baby down and picks up Elmo, a character A.J. has always despised because he seems too needy.
“Elmo!” Maya says.
“Yes,” A.J. says. “Elmo.” He unpins the note and hands the baby the doll. The note reads:

To the Owner of This Bookstore:
This is Maya. She is twenty-five months old. She is VERY SMART, exceptionally verbal for her age, and a sweet, good girl. I want her to grow up to be a reader. I want her to grow up in a place with books and among people who care about those kinds of things. I love her very much, but I can no longer take care of her. The father cannot be in her life, and I do not have a family that can help. I am desperate.
Yours,
Maya’s Mother

Fuck, A.J. thinks.
Maya cries again.
He picks up the baby. Her diaper is soiled. A.J. has never changed a diaper in his life, though he is a modestly skilled gift wrapper. Back when Nic was alive, Island used to offer free gift wrap at Christmas, and he figures that diaper changing and gift-wrapping must be related proficiencies. Next to the baby, sits a bag, which A.J. sincerely hopes turns out to be a diaper bag. Thankfully, it is. He changes the baby on the floor of the store, trying not to dirty the rug or look at her private parts too much. The whole thing takes about twenty minutes. Babies move more than books and aren’t as conveniently shaped. Maya watches him with a cocked head, pursed lips, and a wrinkled nose.
A.J. apologizes. “Sorry, Maya, but it wasn’t exactly a pleasure cruise for me either. The quicker you stop shitting yourself, the quicker we don’t have to do this.”
“Sorry,” she says. A.J. immediately feels awful.
“No, I’m sorry. I don’t know anything about any of this. I’m an ass.”
“Ass!” she repeats, and then she giggles.
A.J. puts back on his running shoes, and then he hoists up the baby, the bag, and the note, and heads for the police station.

Read the full review of The Storied Life of A.J. Fikry by Gabrielle Zevin.