A magical world awaits readers in this spellbinding debut novel. Here’s a taste of what lies in store. 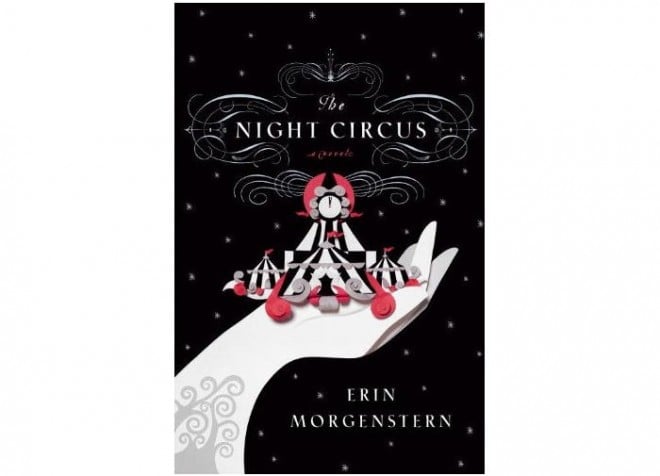 A magical world awaits readers in this spellbinding debut novel. Here’s a taste of what lies in store.

The circus arrives without warning.

No announcements precede it, no paper notices on downtown posts and billboards, no mentions or advertisements in local newspapers. It is simply there, when yesterday it was not.

The towering tents are striped in white and black, no golds and crimsons to be seen. No color at all, save for the neighboring trees and the grass of the surrounding fields. Black- and- white stripes on grey sky; countless tents of vary­ing shapes and sizes, with an elaborate wrought-iron fence encasing them in a colorless world. Even what little ground is visible from outside is black or white, painted or powdered, or treated with some other circus trick.

But it is not open for business. Not just yet.

Within hours everyone in town has heard about it. By afternoon the news has spread several towns over. Word of mouth is a more effective method of advertisement than typeset words and exclamation points on paper pamphlets or posters. It is impressive and unusual news, the sudden appear­ance of a mysterious circus. People marvel at the staggering height of the tallest tents. They stare at the clock that sits just inside the gates that no one can properly describe.

And the black sign painted in white letters that hangs upon the gates, the one that reads:

Opens at Nightfall
Closes at Dawn

“What kind of circus is only open at night?” people ask. No one has a proper answer, yet as dusk approaches there is a substantial crowd of spectators gathering outside the gates.

You are amongst them, of course. Your curiosity got the better of you, as curiosity is wont to do. You stand in the fading light, the scarf around your neck pulled up against the chilly evening breeze, waiting to see for yourself exactly what kind of circus only opens once the sun sets.

The ticket booth clearly visible behind the gates is closed and barred. The tents are still, save for when they ripple ever so slightly in the wind. The only movement within the circus is the clock that ticks by the passing minutes, if such a wonder of sculpture can even be called a clock.

The circus looks abandoned and empty. But you think perhaps you can smell caramel wafting through the evening breeze, beneath the crisp scent of the autumn leaves. A subtle sweetness at the edges of the cold.

The sun disappears completely beyond the horizon, and the remaining luminosity shifts from dusk to twilight. The people around you are growing restless from waiting, a sea of shuf­fling feet, murmuring about abandoning the endeavor in search of someplace warmer to pass the evening. You yourself are debating departing when it happens.

First, there is a popping sound. It is barely audible over the wind and conversation. A soft noise like a kettle about to boil for tea. Then comes the light.

All over the tents, small lights begin to flicker, as though the entirety of the circus is covered in particularly bright fireflies. The waiting crowd quiets as it watches this display of illumina­tion. Someone near you gasps. A small child claps his hands with glee at the sight.

When the tents are all aglow, sparkling against the night sky, the sign appears.

Stretched across the top of the gates, hidden in curls of iron, more firefly-like lights flicker to life. They pop as they brighten, some accompanied by a shower of glowing white sparks and a bit of smoke. The people nearest to the gates take a few steps back.

At first, it is only a random pattern of lights. But as more of them ignite, it becomes clear that they are aligned in scripted letters. First a C is distinguishable, followed by more letters. A q, oddly, and several e’s. When the final bulb pops alight, and the smoke and sparks dissipate, it is finally legible, this elabo­rate incandescent sign. Leaning to your left to gain a better view, you can see that it reads:

Some in the crowd smile knowingly, while others frown and look questioningly at their neighbors. A child near you tugs on her mother’s sleeve, begging to know what it says.

“The Circus of Dreams,” comes the reply. The girl smiles delightedly.

Then the iron gates shudder and unlock, seemingly by their own volition. They swing outward, inviting the crowd inside. Now the circus is open.

Now you may enter.