Q&A with Cathy Marie Buchanan, author of The Painted Girls

In her new novel, Cathy Marie Buchanan takes us back to 19th century Paris, a hub of arts and culture—and a dangerous world for young ballerinas. 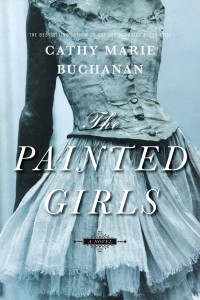 The Painted Girls had us hooked on the fascinating life of the figure behind Degas’ the Little Dancer and the sinister underbelly of the Paris ballet scene. Cathy Marie Buchanan talked to Chatelaine who she most relates to and where she finds inspiration.

How long did it take you to write the book?

I started researching it in spring 2007 when I saw this BBC documentary, The Private Life of a Masterpiece, which was specifically focused on the life of A Little Dancer Aged 14 (Little Dancer). I used to dance, In fact we’d had Degas prints hanging in the studio where I took classes, so I’d known about these ballet girls my whole life.

What was it about the documentary that grabbed you?

There were two things about the documentary. One was the shock value. Today ballet is thought of as quite a middle-class pursuit, but the documentary got into the fact that Marie van Goethem was from a poverty-stricken family. Back then the Paris opera was very much a place where high life met low life. It was a sort of gentleman’s club where mistresses were seen with noblemen. The other aspect of the documentary I found new and stunning was the historian suggested that when Degas exhibited Little Dancer, he did so alongside a pastel called Criminal Physionomies. The art historian went so far as to suggest that Degas was hinting at Marie van Goethem’s criminality by exhibiting her with these pastels. This reflects the thinking of the time that you could tell a person’s criminality based on certain facial features.

That changes the way you see Little Dancer completely.

Yes. You can see the same features in the sculpture of Marie van Goethem and those accused murderers in Criminal Physionomies.  It was so interesting because as a little girl, people would give me birthday cards with Little Dancer on and I always thought she was such a pretty, wholesome thing. I found that contradiction so shocking and fascinating.

So, much of The Painted Girls is based on true stories?

The whole story of Emile Abadie and Pierre Gilles is true. They are real people and I stick to the facts. Well, you’ll see when you get to the author’s notes that they were actually implicated in three crimes, but I turned them into two for the sake of story. I stick to the known facts of Marie van Goethem’s life and of the criminals’ lives but in the book the two are intertwined. And that’s the completely imaginary part.

The perspective has changed in the way we think about ballet girls, as well as the way we see them, hasn’t it?

Society believed that the ballet girls were sluts and whores, yet the men got off scot-free. Most of these girls were from poor families and just trying to put meat on the table and then there were these men with all the advantages of education, money and privilege and nobody thought they were doing anything wrong.

At the Paris Opera the men were allowed to go to the Foyer de la Danse but the women were not. And that’s where a lot of these encounters between young ballet girls and these men happened. Then in the art galleries men would be there with their women, so I wonder, was Degas doing something intentional by putting this reminder of this other life they indulge in right there in front of them while they’re standing there in their life?

You’re clearly a very creative person, and even took ballet lessons, yet you studied science in school. How did it take you so long come to writing?

In high school I was very involved in classical ballet, I took classes four or five nights a week. I was in a regional company so I was performing, and then in my regular life, I was also designing and sewing pretty much all of my own clothes so I think I was feeding my artistic soul there. And then I worked in finance for 10 years at IBM and I was always taking something at night school. I took painting, drawing, art history, interior design, woodworking and then eventually hit upon creative writing. So I think that in all that I was trying to find an outlet and eventually hit on creative writing — well after spell check was invented!

Did coming to writing later in life pose any challenges?

How was this writing experience for The Painted Girls different from The Day The Falls Stood Still?

The Painted Girls has more historical content, so it was hard to get that in. I’m also writing from two different vantage points, which adds a level of complexity: You want the stories to be equally engaging and you have to make sure they meet at certain points.

And the other thing is researching The Painted Girls was about 100 times harder. Niagara Falls is my hometown; the primary sources were in English. The Painted Girls is set 30 years earlier, not my hometown, and the primary sources are in French. There was a moment when I was half way through writing the first draft that I thought, What am I doing? This is so arrogant to think that I can write about a culture that’s not my own. I really had a crisis of confidence. I think that’s the writerly way though. We all have crises of confidence and then some of us buck up and some of us don’t.

You come from a large family. Did that influence your work?

Sisterhood is really top of mind with me. I didn’t set out to write a story about sister rivalry and sister love but it found its way onto the page. I have younger sisters and one is just 16 months younger than me. We’re very close now, but in high school we were rolling around on the floor hitting each other with a wire brush. I am her kids’ god parent, she’s my kids’ godparent. She lives in Chicago but I see her five times a year. We stood up for each other at our weddings, so I mean I don’t think you could be closer. And yet at high school we would walk down opposite sides of the street and saying things like, “You can’t come to that party because I’m going to it”.

Who do you most relate to?

I probably relate most to Antoinette. She was the most fun to write.  I’m the oldest girl in my family and I kind of do play that role of the mothering. Not to the same extent – everyone’s grown up now but I seem to be on everybody’s speed dial in a crisis. Although I’m not as brazen as she is.