Garth Risk Hallberg’s showstopper (and doorstopper) City on Fire conjures a gritty Big Apple on the brink of destruction. 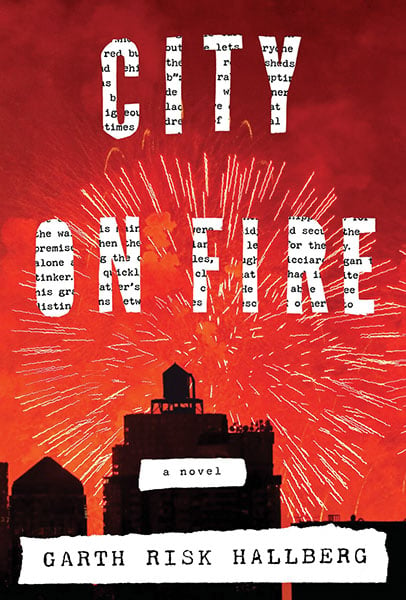 In his 900-page anvil of a novel, City on Fire, Garth Risk Hallberg excavates a lost civilization, piecing together its history through ancient artifacts like vinyl records, magazine clippings, handwritten letters, talk-radio broadcasts and mimeographed fanzines. Set in the mid-1970s, this is a story about an unrecognizable and almost forgotten New York, one that is scary, dirty and reviled. The Son of Sam serial killer terrorized its citizens and President Gerald Ford refused its plea for a federal bailout (“FORD TO CITY: DROP DEAD,” ran a 1975 headline in the Daily News). “Budget cuts and crime and unemployment had brutalized the city,” Hallberg writes, “and you could feel on the streets this sense of soured anarchy, of failed Utopia.”

City on Fire is also a story about an intersecting crowd of people drawn to New York’s grit and grime. At the centre are estranged siblings Regan and William Hamilton-Sweeney. Split from her preppy, philandering husband, Regan works in the family’s investment business, while William slums it downtown, experimenting with art and heroin and keeping his lovelorn boyfriend, Mercer, at arm’s reach. Separated from this foursome by one degree are suburban teenage punks Charlie and Samantha, and just beyond them are a nihilistic Lower East Side druggie prophet, an obsessive fireworks designer, a possibly evil financier, a journalist with writer’s block and a veteran detective hoping to solve one final case. The sprawling cast is connected by a New Year’s Eve shooting in Central Park, a cleverly twisty mystery that propels the action forward and back in time, sprinkling clues en route. Everyone is hiding something and everyone is implicated.

But Hallberg’s ambition is far greater than the central whodunit. This is a Big American Novel with equally big stakes — a 2013 bidding war for the debut led to a nearly $2-million advance — about a city that represents, for better or worse, the oversized dreams, pulse and appetite of America itself. Capturing the moment just before New York rises from the wreckage to become a financial and cultural powerhouse, the story’s tension and melancholy hang on the reader’s knowledge of how impending gentrification will reward some and destroy others, pushing out the oddballs and have-nots to make room for the burgeoning 1-percenters.

That stark division is brought into bright relief as the story hurtles toward the notorious 25-hour blackout of July 13, 1977, a muggy night of looting and confusion. Groups of people come upon each other in the hot gloom — “angry white ethnics,” “punk rockers, shorn of head,” “the queens of the East Village,” “boho hobos” and “the petit bourgeoisie” — all mad as hell and demanding to “take back the apple! Take it back!” even as one character wonders about “the ambiguity around just who is supposed to be doing the taking, and from whom.”

Hallberg himself seems to be rooting for the underdogs, with a romantic take on New York’s rough edges that sometimes veers into a lofty self-seriousness. But in the end, City on Fire pulls off a beautiful, dark feat: telling the story of a fabled city through the ruins, bones and souls on top of which its glittering towers were built.

Related:
Kevin Newman and his son grapple with the meaning of masculinity
Life (and death) lessons in Kate Atkinson’s A God in Ruins
In Close to Hugh, family is stabilizing and stifling