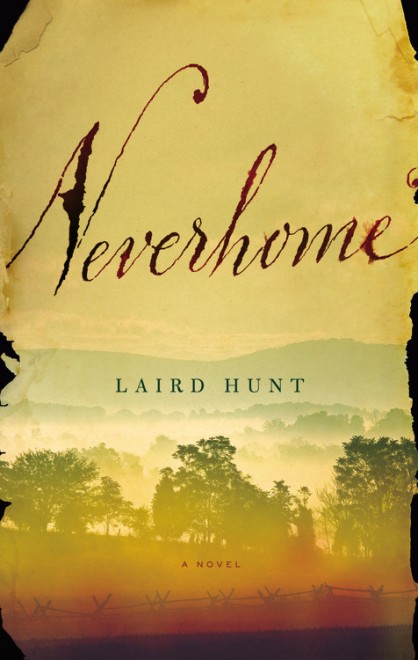 With the Civil War waging, farmer’s wife Constance makes a momentous decision: she will go to battle, her husband, Bartholomew, will stay at home. In his provocative new novel, Neverhome, Laird Hunt follows Constance’s exploits. Disguised as a man, now calling herself Ash, she slips easily into a soldier’s role — but repercussions lie ahead, for both Ash and Bartholomew. Here’s what Laird had to say about his book.

What was the inspiration for the novel?
The desire to explore the little-known extraordinary phenomenon of women who disguised themselves as men and went to fight in the  Civil War. There were hundreds of them. I first learned of them when I read An Uncommon Soldier, which collects the Civil War letters of Sarah Rosetta Wakeman, who called herself Lyons Wakeman.

Why does Ash decide she’ll go to war? She has a burning desire to prove to herself that she can keep her nerve in the face of any trial. I can’t say too much more than that because part of what gets revealed in the novel is the cause of this desire, as well as other factors that drive her to enlist.
What is the relationship between Ash and her husband? It is loving but fraught with complexity (like all the classic relationships!). During her time at war, Ash and Bartholomew exchange frequent, loving letters. But they are haunted by a shared sadness, too.

How did you keep Ash true to her time, despite her adventurous nature?
The fact that so many women did the kinds of harrowing, difficult, challenging things Ash does made it very easy not to seem to be projecting the 21st-century onto the 19th-century. She is as fierce as they come but she is no cartoonish Lara Croft–type character!

What does your novel say about human character and gender?
I’d like to think it says many things and none more loudly than that we all, regardless of gender, regardless of race, regardless of age, have available to us, and have been pushed over and over again to experience, the very deepest aspects of what it means to be human.

Has the book been optioned for film?
Yes, by Element Pictures! Lenny Abrahamson [Room, Frank] will direct.