Kevin Newman and his son grapple with the meaning of masculinity

In their joint memoir, All Out, anchorman Kevin Newman and his son, Alex, challenge each other’s ideas of what makes a man. 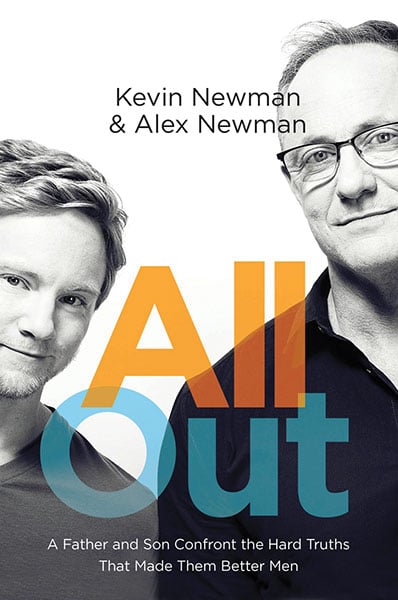 Public agonizing over what our careers steal from our families has long and largely been women’s work. That’s why All Out, by broadcast journalist Kevin Newman and his son, Alex, is so welcome. Through alternating chapters in a shared memoir, the two recount their painfully distant relationship and its slow healing process.

Throughout his chapters, the elder Newman torments himself over the ways his all-consuming career affected his family, particularly his relationship with his only son. His regret over sacrificing an easy closeness with his children is palpable, as is his belief that he was shortchanged by a culture that encourages men to prioritize work over parenting. Alex’s chapters trace a bully-filled childhood, building to his struggles to meet his dad’s expectations and coming out as gay at age 17.

It’s fun to witness the son test the father — making out with his boyfriend on a raft in their close-knit cottage community — until it becomes clear that Alex is daring Kevin to get on with rejecting him, as he fears is inevitable. It’s admirable to see the father work against the emotions that exist despite his outwardly progressive politics. A struggling Alex duly notes Kevin’s quick channel change when confronted with a male love scene, although Kevin admits a discomfort with displays of graphic sexuality in general.

Only in writing the book do the Newman men fully realize how much they’ve misunderstood each other, and how much that sabotaged their relationship. Kevin’s tight emotional control and ability to hide all signs of weakness — skills crucial for a news anchor — appeared to his son to be an invulnerable facade. For Alex, it was hard to know who the real Kevin Newman was.

Related: Working fathers are going ‘all in.’ Inside the dad wars

Amid all this, readers also get a detailed account of the career of a man who once spectacularly failed as the host of Good Morning America — but not before he’d altered everything from his accent to his eyebrows in an effort to make it work. While interesting, that story feels less compelling than the interplay between the narratives of father and son. (Admittedly, there are memorable details: On the morning of 9/11, Kevin left the house in such a hurry he forgot to put on underwear under his anchor’s suit; at the end of that long day, he pulled over to weep by the side of the road.)

This book is most valuable when it speaks to the great “grey zone” of fathers, as Alex calls it: those whose professed politics don’t match their visceral reactions — disgust, regret, fear, shame — when discovering that a son is gay. All Out is poised to make a meaningful impact on those dads and the kids who need their support. The great vulnerability of queer youth is returned to often in the book, with an emphasis on the disproportionately high risk of suicide those young people face. It is sobering that Alex — the beneficiary of two loving and reasonably liberal parents — was nevertheless filled with self-loathing and contemplated the upside of death.

It’s no surprise that a son must grapple with his father’s idea of masculinity. What’s refreshing about All Out is the revelation that it works the other way around too. In the end, it’ s Alex who becomes his father’s role model, showing him the courage it takes to be your own man.