Readers just can't get enough of her epic books — and lucky us, we'll soon be seeing the pages come to life on the small screen! 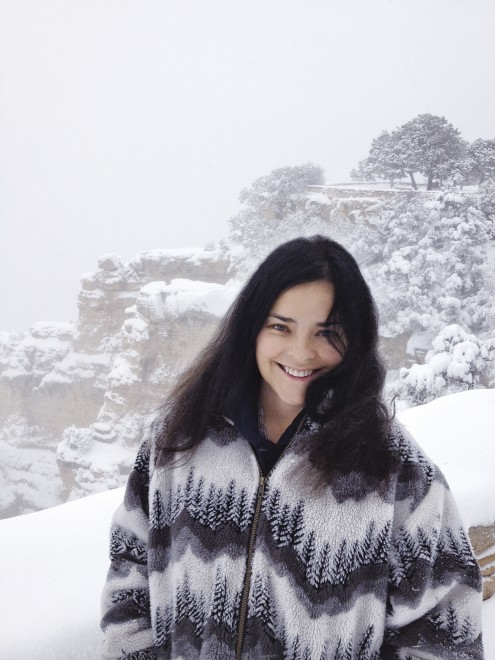 Diana Gabaldon’s fans are rabid. Post a picture related to the Outlander series on Instagram and watch as people from around the world “like” it. Now that fandom is going to get even bigger: An adaptation of the first book in the series, Outlander, will hit the small screen later this summer and, from what we’ve seen of the trailer, it is amazing. We chatted with Gabaldon about the television show and the books when she came to Toronto recently to celebrate the release of the eighth Outlander book, Written in My Own Heart’s Blood.

How did you move from studying zoology and marine biology to writing novels?

When I turned 35, I thought, Mozart was dead at 36, so I set the bar: I’m going to start writing a book on my next birthday. I thought historical fiction would be easiest because I was a university professor and know my way around a library, and it seemed easier to look things up than make them up. If I turned out to have no imagination, I could steal things from the historical record.

Tell us about the TV show and what that experience has been like.

It’s been totally fascinating. Ron Moore, the showrunner, was looking for a new project after Battlestar Galactica wrapped. He was having dinner with his wife and his production partner, and one of them suggested Outlander, not realizing the other was also a huge fan. He said, Do you have a copy? and they both whipped it out of their bags. So he stayed up all night reading it. He said, I love it! It’s strongly focused on this female character, it’s unpredictable—the minute I think you’re heading this way, Wham!, something else happens! So he was interested in it. But, as he has said to fans many times, “My chief job is to not screw up my wife’s favourite book.”

How do you feel about the casting?

I love it. I was amazed they cast Sam Heughan so quickly. Everybody thought it would take months and months to find Jamie. Instead, he was almost the first person. He walked in and Ron said, There he is, there’s Jamie. They called to tell me and I said, Really? It wasn’t a name I recognized, and I looked him up on IMDB and thought, This guy looks grotesque, what are you thinking? But Sam’s a very chameleonic actor, he looks different in all his parts and even in real life. Then I got the audition tape and five seconds in, I was thinking, He doesn’t look anything like his pictures, then five seconds later [snaps fingers], he was gone and it was just Jamie Fraser. It was the most amazing thing I’ve ever seen.

And the character of Claire?

She took longer — nearly four months for them to find her. They had Sam fly back and forth to do tests. There were dozens of really good, strong British actresses but none of them had that particular Claire-like vibe. Finally, they told the casting people, Bring us everybody you ruled out in the first go-round. They spent all weekend looking through them and every single person said, This one, there’s something about her. And it was the same one, it was Caitriona Balfe, a self-tape she’d recorded on her cell phone. So they had her come to a proper audition with a casting director. And they said, this looks promising. So they had poor Sam fly in from London again — it’s an 11-hour flight — and he auditioned and flew right back out again. And I saw that one and sure enough, there’s Claire!

What’s been the biggest surprise about the whole TV experience?

They show me scripts and ask my opinion and things like that, which is very cool and deeply absorbing. I’m fascinated to see how things work, watching the footage. They invited us to spend 10 days at Outlander World, as they call it. I’m staggered at how huge it is and how well it all works. The high degree of perfectionism they have, even the smallest of details — they send plasterers out to antique castles to plaster walls and peel them off, then make plaster casts, so the sets are the actual rocks you would have in a castle that age.

Are you on camera?

I did a cameo, but I’m not allowed to tell anyone, because they want people to have to look for me!

There’s a Doctor Who connection to Jamie, isn’t there?

I happened to see a really old Doctor Who, the second Doctor, Patrick Troughton, and he’d picked up a Scotsman from 1745. It was an 18 or 19-year-old man who appeared in a kilt, and I thought, “That’s rather fetching.” I found myself still thinking about it the next day, and I thought, You want to write a book, it really doesn’t matter where you set it, the important thing is to start it. So fine, Scotland, 18th century! And knowing nothing about Scotland, the 18th century, no plot, no outline, no characters, nothing but the rather vague image of the country and this young man in a kilt — which, of course, is a very powerful and compelling image!

So the whole Scotland thing was pure accident really?

Yes. So was the time travel. Nothing to do with Doctor Who.

Claire wasn’t actually the main character at the start of series, was she?

I thought, I must have a lot of Scotsmen, because of the kilt factor, but it would be a good idea to have a woman to play off these guys and have sexual conflict. I let her walk into a cottage full of Scotsmen to see what she’d do. She walked in, they’re all staring at her, and I thought, Why? Does she look funny? One of them stood up and said, “My name is Dougal McKenzie.” Without stopping to think, I typed, “My name is “Claire Elizabeth Beauchamp, and who the hell are you?” I thought, You don’t sound at all like an 18th-century historical person. I went with it for several pages, trying to beat her into shape, but she wasn’t having any of it. She just kept making smart-ass, modern remarks, and she also took over and started to write the story of herself. I said, I’m not going to fight with you all the way through this book, Go ahead, be modern, I’ll figure out how you got there later. So it’s all her fault!

It’s actually perfect, because the key thing to historical fiction is having characters who fit the time, and you had a character who didn’t fit the time…

Is there a character of yours you most identify with?

There’s this group of fans who take me out for tea, and they got started on Black Jack Randall — he’s a scum, he makes my skin scrawl — and I’m sitting there sipping my tea, thinking, You have no idea you’re talking to Black Jack, do you?

So every character has an aspect of you?

Of course! I think characters are going to be, if not a reflection of the author, at least some refraction of some part of their personality.

What is the thing people would be most surprised to find out about you?

I think they’re totally astonished that I’m short — 5’2” [pause] and a ½! It’s like when people meet actors, I don’t know if it’s the big screen effect, or something, but they’re always surprised to find they’re quite often short. That’s the response to Sam Heughan, sometimes when I put up pictures of him — because Jamie’s supposed to be, I don’t know, 7’ tall — so people will say, He’s puny.

How tall is he?

He’s very big. They made him work out to make him even bigger. He’s built like my husband — long, lean, basketball-player body. So they sent him to pump iron every morning. He told me he has to eat 6,000 calories a day. A lot of people are going on their misapprehension of what’s actually in the books or their own visual expectations. Because, logically enough, people build up their own mental images. A surprising number of people are convinced Jamie is 7’ tall and has been taking steroids for the last 30 years and looks like a WWF wrestler. They say, Jamie is burly! And I say, search that on your Kindle. Show me where it says “burly” anywhere. It says, “long, lean, elegant muscles.”

It’s so interesting what readers bring to books. There’s always their own interpretation, outside the writer’s imagination.

Which they’re totally entitled to have. But it seems unfair they should then complain that a producer is unable to extract telepathically that image and scour the earth for an actor who meets it in every particular.

To grasp the fact that a sex scene is not about sex. It’s about emotions, not the exchange of bodily fluids.

This book is the eighth in the Outlander series. Is there one more book in the series?

I don’t plan the books at all. I think in shapes. Each book develops a strong organic shape. And when that shape is complete, the book is complete. I don’t know where the end is. I don’t start at the beginning. It’s like playing Tetris in my head in a very slow kind of way. All the shapes join up.