Ami McKay takes readers — and heroine Moth — on a turbulent journey in Part 3 of her new novel, The Virgin Cure (page 231 to the end). 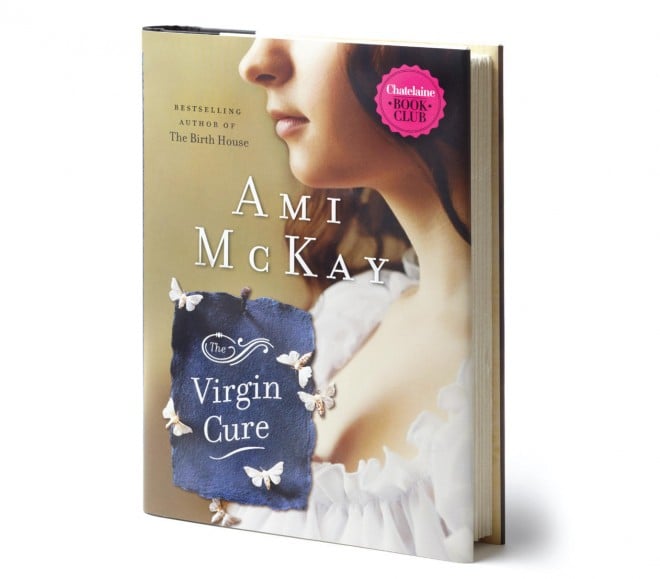 Ami McKay takes readers — and heroine Moth — on a turbulent journey in Part 3 of her new novel, The Virgin Cure (page 231 to the end). Alex, Stacy and I discuss how McKay spun her magic storytelling web and so effectively ensnared us with her tale and her cast of characters.

Laurie: So, the end of The Virgin Cure! Thoughts?

Alex:  I cannot believe how much happened. The pace, the drama, the intrigue. LOVE Mr Dink. Hate Mr. Wentworth (almost as much as Mrs. W).

Stacy:  I was just about to say the same thing.

Laurie:  It was crazy action, wasn’t it, but not rushed somehow — just unrolled.

Stacy:  It really did unfold at just the right pace.

Alex:  It did… and even the deflowering of Moth — we had seen it coming the whole book and yet it just happened. That in itself made it shocking.

Laurie:  I know! I was hoping it wouldn’t happen, that when she was at Mr. Dink’s she’d just stay there, and that would be that.

Alex:  I know! He was such an angel. I am so glad he came back in to rescue her. He was like her Daddy Warbucks!

Stacy:  He kind of was! Except that, in the end, Dr. Sadie was Mommy Warbucks.

Laurie:  They all rallied round to help her with the costume and hair and everything. It was Sadie’s idea re the dress.

Stacy:  AND they encouraged her to negotiate for more money and stuff—loved that.

Stacy:  And got her little house! And helps out other girls who are just like her.

Laurie:  She had been like a broken doll and Sadie just let her be.

Alex:  She let Moth come to her own conclusion that she needed to go back to Dink. She finally realized her strengths, playing to her dark features and her gypsy heritage.

Laurie:  And had help pulling it all together and making the most of it all.

Stacy:  Yes! Exactly. I feel like it ended on the absolutely perfect note. That’s what I was waiting for all this time—for her to find her own little place in the world.

Alex:  It was wonderful to watch her change.

Laurie:  It was like the promise of that was always in her, it just had to come out.

Alex:  Exactly. And few people saw it from the start —it just needed coaxing.

Stacy:  She had to be nurtured and allowed to feel safe.

Alex:  I just loved the sound of that crazy house of horrors, too. She found a home with all those misfits. And I was so happy that she called out Sadie’s feelings about the pharmacist.

Stacy:  It’s a common idea (the family you choose, etc.), but I really like how McKay executed it.

Laurie:  Yes! And that Sadie and the pharmacist ended up together.

Alex:  It showed a closeness that was developing on both sides, i.e. Moth could read Sadie, too.

Stacy:  Not to be a downer, but can I say how heartbroken I was over Alice??

Laurie:  I have to admit, that horrible as she was, I can’t help but think about Mae out on the streets…

Alex:  I know — SO awful. Moth’s realization gave me an “aha” moment. But I knew Mae was stealing from the start. Remember when I said I got stuck on the sign that said, “Beware Pickpockets” on the streetcar, and I said I got the feeling we would hear more about it?

Stacy:  Oh, and I was just going to say that I didn’t see Alice getting raped coming AT ALL, so I was shocked and so sad for her — the most innocent one who just wanted someone to love her.

Laurie:  Yes re the stealing, but noooo re Alice!

Stacy:  I think Samuels paid Mae for getting him Alice. I don’t think she stole from him. Because that’s how Emma knew Mae was at fault for Alice getting raped.

Alex:  That didn’t even occur to me. I think she was stealing from everyone. That’s why she was sneaking out — to pickpocket and make enough money to run away. She’s so conniving, though, that she probably instigated both: sold Alice and stole.

Laurie:  I guess she’s clever enough and wily enough that she’ll make it somehow. OK, I don’t need to feel sorry for her at all.

Stacy:  Yeah, the part where Moth says “she ruined Alice for her own profit and she might have been planning to do the same to me” (or something like that!). I think it was Samuels who she had been meeting, yes, but not to dance the night away. I feel like all those glimpses of the handsome young man from the streetcar that Ami mentioned was foreshadowing their plotting. And it says, “At the intermission, Mae managed to free herself of Mr. Harris… The next time I spotted her, she was standing at the bar, talking to two young men, one of whom I was sure was the gentleman she’d flirted with on the streetcar all those days ago.”

Alex: Did anyone else wonder what happened to Cadet?

Alex:  I wanted Cadet to go with Alice!

Stacy:  I didn’t, until I read that line from Moth, and then I couldn’t unsee it!

Laurie:  But I don’t see that future for either of them. It’s just not plausible.

Alex:  What about Mr. Wentworth? Were you hoping he would be kinder?

Laurie:  Yes. I wasn’t sure what to expect but yes.

Stacy:  I was, but at the same time I wasn’t surprised that he wasn’t kind in the end. I mean, it was clearly all about him, right?

Alex:  It was amazing seeing her use her power over him, even after she’d been through that awful experience. And she sort of held herself up and shouted for him to wait.

Laurie:  That she had the guts to do that after that!! That was something. And wouldn’t let him go till she’d totally freaked him out.

Stacy:  He was SO SCARED when she talked about “a house divided.” The power shifted for just a little while.

Alex:  Haha! It’s almost like that low point forced her to find her power.

Laurie:  It so did. And he was just coming back the next night to find out more.

Alex:  It was brilliant!

Alex:  And she left him stewing forever!!!

Laurie:  And that’s when it was really truly over.

Stacy:  That was the best part! He’ll never know. He’ll always be wondering. Kind of the perfect revenge.

Alex:  The PERFECT revenge — always looking over his shoulder thinking either his wife or his butler is trying to kill him. That’d drive a person mad!!

Laurie:  He can join his wife.

Alex:  Nutcase! And all along, the descriptions of the scenes, the room, with the flowers and everything seemed so vivid. And her practising her pout to be like the collectible cards —so adorable.

Laurie:  She’s waiting to be what she’s supposed to be — she just has to get there. And I love how when she does, she leaves the gate open, so if need be, others can creep in for help if they can’t fit between the bars.

Alex:  Soooo CUTE. And the ad she posts — she’s such a good person. She’s going to help someone else now.

Stacy:  I LOVE THAT AD! I was just about to say, it might be my favourite part. Just because it’s so…. hopeful.

Laurie:  And then setting them free, so to speak, with pockets stuffed full of money.

Alex:  I know. It shows she’s not affected by her past.

Stacy:  I think she HAS been affected by her past, but it’s shaped her into who she is/inspired her to rise above her childhood. It didn’t drag her down.

Alex:  She’s not become twisted like the others, I mean.

Stacy:  It’s like she’s a good person, but the ability to do that was hard-won. Does that make sense?

Laurie:  That’s it. She didn’t let it destroy her, when it could have, or let it make her mean and grasping.

Alex:  She rose above the examples that had been set for her

Stacy:  Yeah, exactly, to both of you!

Laurie:  But rather she’s generous and open and tries to make things better. Like Sadie and Mrs. Riordan.

Laurie:  Yes. A little man who’s not so little. McKay managed to treat a grim subject in an ultimately inspirational way, and educate me at the same time, without being pedantic, but rather entertaining.

Laurie:  Loved Moth and the other characters, and the sense of place is incredible.

Stacy:  And really, the story was just told so well; I got so caught up in wanting to know what happens next.

Alex:  Her characterization is awesome, as well as the different modes of story telling.

Laurie:  Yes, and the sense of suspense and resulting tension: A+. Well, next post, we’ll have some questions we’ll ask Ami McKay about her book, and then onwards to our next Chatelaine Book Club pick, The Solitude of Prime Numbers by Paolo Giordano. So, next week same time, ladies?