Discussion: The Night Circus by Erin Morgentstern, part one

This week, we’re thrilled to start our discussions of Erin Morgenstern’s magical, enthralling The Night Circus, which landed this debut author a seven-figure advance and hit the bestseller lists within mere weeks of release. For the event, Alex and I are joined by our newest Chatelaine book club member, assistant editor Lora Grady. This time out, we read pages 1 to 131 — and trust me, it was hard to limit our reading to that first part of the book and not devour the rest of it! 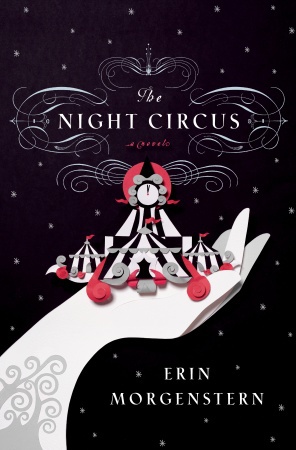 This week, we’re thrilled to start our discussions of Erin Morgenstern’s magical and enthralling The Night Circus, which landed this debut author a seven-figure advance and hit the bestseller lists within mere weeks of release. For the event, Alex and I are joined by our newest Chatelaine book club member, assistant editor Lora Grady. This time out, we read pages 1 to 131 – and trust me, it was hard to limit our reading to that first part of the book and not devour the rest of it!

Laurie: Hello! So welcome to the enchanting, captivating, “unputdownable” world of The Night Circus!

Alex: Oh my God, so magical!

Lora: Enchanting, indeed. I love the idea of a circus that takes place at night.

Laurie: Glad you think so, Alex. I know this isn’t really your type of book.

Alex: I know! I was mesmerized. (I’m seriously into the magic theme, can you tell?!)

Laurie: Ha! Doesn’t it just suck you in?

Alex: The pacing and everything is just so well-crafted.

Laurie: I rarely come across a book I savour in the way I have been this one.

Alex: It did feel like magic, because the book evaporated. When I set out I thought, “How am I going to get through these 131 pages?,” and then they disappeared – just like the circus!

Laurie: So a real suspension of disbelief, you’d say?

Alex: Yes! The prose is amazing. Such rich imagery and sensory overload (in a good way). Everything just seemed so natural – or should I say supernatural?

Lora: I normally struggle with books like this, where everything is a big mystery, but all of my burning questions just keep me turning the pages.

Laurie: I kept visualizing everything – the lights, the magic, the beauty. Just the description of the circus sign lighting up alone was so stunning and wondrous.

Lora: I absolutely loved the intro to the book! It sets it up so well. And you can almost smell the caramel and the bonfire.

Alex: And it’s so fitting that that’s how Marco plays his first hand.

Laurie: That rainbow of fire! But there’s tension underlying the beauty, too.

Lora: So much tension. By the time we meet Celia, she’s already been through so much. And to have a father like Prospero!

Laurie: And that weird shaking sensation Celia feels at midnight – the feeling that something has been cast over the circus. Eerie.

Alex: That was so powerful. Her core was shaken. Like when her father appears as a ghost.

Laurie: Following her around like a creepy shadow. He’s not nice.

Alex: He seems a little self-serving, no?

Lora: From the moment he sees Celia, it’s pretty clear fatherhood isn’t on his list of life wishes.

Laurie: It’s like he’s “something wicked this way comes.…” Maybe? Who knows? And that’s what’s so exciting. The not knowing.

Alex: I was a little confused about Isobel at first, though.

Laurie: Me, too. I thought it was Celia.

Alex: Me, too! Phew! Thought I was being super slow. Glad we all confessed at the same time. I feel lighter somehow.

Laurie: It’s an illusion! All of it!

Alex: And what about Bailey? I was confused about the woman he saw on the pedestal – the In Memoriam monument.

Laurie: And yes, who is that statue? The future? And it’s so interesting having a true outsider like Bailey in the mix.

Alex: Was she supposed to be the woman with the red hair? Or rather the girl who he finds as a child when he breaks in?

Lora: I think the woman with the red hair turns out to be Poppet.

Alex: So is time going backwards then in the circus? (Only in a book club like this can such a line be uttered without judgment!!)

Laurie: I have no idea what’s happening with time in the circus, but I don’t think we can take anything for granted!

Lora: Morgenstern shifts time periods with some chapters. It’s confusing but effective! The circus has had such an impact on Bailey’s life.

Laurie: Compared to plain apples and sheep, who wouldn’t be seduced by it?

Lora: Somehow I don’t think Harvard is in his future!

Laurie: It’s interesting to see the completed circus as they’re planning it, so to speak, with the Bailey segments.

Alex: Hold up! Are you saying Bailey’s story is in reverse, because when we met him, he was a child, no?

Lora: Yes. When we meet him again, he’s much older. But in between, we jump back in time to when they were planning the circus.

Alex: And then he met the redhead as a child.

Lora: I’m so glad I’m not the only one confused by this! It took me awhile to figure it all out.

Laurie: Yeah, I had to keep flipping to the dates at the start of each chapter.

Laurie: So the challenge…??? It’s hard to figure out the point.

Lora: I’m dying to know what Celia’s next move will be!

Lora: I can only assume the Winter Garden tent was Marco. Right?

Lora: She has some catching up to do. But I bet whatever she does will be spectacular.

Laurie: I think they both have their unique skills.

Alex: I cannot wait for them to meet visage à visage.

Laurie: One question. Why can’t Marco move with the circus? Did I miss something?

Alex: I thought he did.

Laurie: He says he has to stay in London. Why?

Lora: I wonder if it has anything to do with Alexander keeping an eye on him?

Laurie: Maybe we’re just supposed to go with it.

Lora: You know, I feel like “just going with it” is a big part of reading this book. There are so many unexplained events that if you tried to figure them all out, it would be frustrating.

Laurie: It’s all part of the suspense and drama.

Alex: I think so. That Alexander fella is particularly shady and controlling.

Laurie: Yes, but I like him better than finger-slicing, wrist-breaking Hector.

Lora: OMG! The part where Hector shatters Celia’s wrist was just awful! And how he told her not to cry! Poor thing!

Laurie: And she’s so lovely in spite of it all.

Alex: I know! Imagine what she could do with her teenage angst if she wanted to! I’m really loving this book.

Laurie: Morgenstern’s creation of this world is just so superb! And another amazing thing: the clock! Awesome!

Alex: That was the most amazing description ever! I was totally in a different universe – like a story within a story.

Lora: Yes. I’m so intrigued by the man who made it!

Laurie: I want to visit this world. Now! Talk about pure escapism – with yummy drinks and food to boot!

Lora: Of all the tents described so far, which one would you most want to visit?

Laurie: Hmm. If I had to pick a tent, I think Celia’s. But the dinner parties (and Tsukiko), so intriguing! Oh, the ice garden, too. And the wishing tree. I want all of them. Greedy, I know. Actually, I want to be Erin Morgenstern.

Alex: I will second you on all of that. And those midnight dinner parties – I want an invite to one of them. I can’t wait to polish off the next section.

Lora: I really hope Celia and Marco meet soon! I bet they’ll come face-to-face at her performance and something huge will happen. I mean, if his performance knocked her off her feet at a distance, what on earth will happen when they’re together in the same tent?!

Alex: The lovin’ better be epic.

Laurie: Okay, Alex. Enough with the sex! What about Poppet and Widget and what they said to Celia? And her thinking, “I need to keep an eye on these two?”

Lora: I love those two!

Alex: They are set to become pretty lead characters, aren’t they?

Lora: I hope so. But I love their innocence right now. I think Celia feels protective over them because she was so exploited by her own father for her abilities. I love how Morgenstern creates their characters: The one born before midnight sees the past; the one born just after midnight sees the future. So brilliant and, again, enchanting!

Laurie: She is, isn’t she. She was inspired by immersive theatre, and she so successfully creates that immersive feeling in a book. It’s astonishing. I want to dive right into it. Submerse myself in it.

Lora: It is very theatrical. That influence makes so much sense.

Alex: It’s so apparent from the seamless creation of this universe. It’s so unreal that it feels real.

Laurie: Well, next week, we’ll find out if Marco and Celia meet (and survive the encounter, haha!). See you then!

Laurie: Pace yourselves! And until then!