Book excerpt: A Tale for the Time Being by Ruth Ozeki

In this latest novel from author Ruth Ozeki, a troubled Japanese schoolgirl starts a diary she hopes will be found someday by a sympathetic reader. 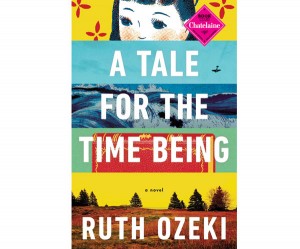 A Tale for the Time Being by Ruth Ozeki

Hi! My name is Nao, and I am a time being. Do you know what a time being is? Well, if you give me a moment, I will tell you. A time being is someone who lives in time, and that means you, and me, and every one of us who is, or was, or ever will be. As for me, right now I am sitting in a French maid café in Akiba Electricity Town, listening to a sad chanson that is playing sometime in your past, which is also my present, writing this and wondering about you, somewhere in my future. And if you’re reading this, then maybe by now you’re wondering about me, too.

You wonder about me. I wonder about you. Who are you and what are you doing? Are you in a New York subway car hanging from a strap, or soaking in your hot tub in Sunnyvale? Are you sunbathing on a sandy beach in Phuket, or having your toenails buffed in Abu Dhabi? Are you a male or a female or somewhere in between? Is your girlfriend cooking you a yummy dinner, or are you eating cold Chinese noodles from a box? Are you curled up with your back turned coldly toward your snoring wife, or are you eagerly waiting for your beautiful lover to finish his bath so you can make passionate love to him?

Do you have a cat and is she sitting on your lap? Does her forehead smell like cedar trees and fresh sweet air?

Actually, it doesn’t matter very much, because by the time you read this, everything will be different, and you will be nowhere in particular, flipping idly through the pages of this book, which happens to be the diary of my last days on earth, wondering if you should keep on reading.

And if you decide not to read any more, hey, no problem, because you’re not the one I was waiting for anyway. But if you do decide to read on, then guess what? You’re my kind of time being and together we’ll make magic!

Ugh. That was dumb. I’ll have to do better. I bet you’re wondering what kind of stupid girl would write words like that.

Well, I would. Nao would. Nao is me, Naoko Yasutani, which is my full name, but you can call me Nao because everyone else does. And I better tell you a little more about my- self if we’re going to keep on meeting like this . . . ! Actually, not much has changed. I’m still sitting in this French maid café in Akiba Electricity Town, and Edith Pilaf is singing another sad chanson, and Babette just brought me a coffee and I’ve taken a sip. Babette is my maid and also my new friend, and my coffee is Blue Mountain and I drink it black, which is unusual for a teenage girl, but it’s definitely the way good coffee should be drunk if you have any respect for the bitter bean.

I have pulled up my sock and scratched behind my knee.

I have straightened my pleats so that they line up neatly on the tops of my thighs.

I have tucked my shoulder-length hair behind my right ear, which is pierced with five holes, but now I’m letting it fall modestly across my face again because the otaku 4 salaryman who’s sitting at the table next to me is staring, and it’s creeping me out even though I find it amusing, too. I’m wearing my junior high school uniform and I can tell by the way he’s looking at my body that he’s got a major schoolgirl fetish, and if that’s the case, then how come he’s hanging out in a French maid café? I mean, what a dope!

But you can never tell. Everything changes, and anything is possible, so maybe I’ll change my mind about him, too. Maybe in the next few minutes, he will lean awkwardly in my direction and say something surprisingly beautiful to me, and I will be overcome with a fondness for him in spite of his greasy hair and bad complexion, and I’ll actually condescend to converse with him a little bit, and eventually he will invite me to go shopping, and if he can convince me that he’s madly in love with me, I’ll go to a department store with him and let him buy me a cute cardigan sweater or a keitai 5. or handbag, even though he obviously doesn’t have a lot of money. Then after, maybe we’ll go to a club and drink some cocktails, and zip into a love hotel with a big Jacuzzi, and after we bathe, just as I begin to feel comfortable with him, suddenly his true inner nature will emerge, and he’ll tie me up and put the plastic shopping bag from my new cardigan over my head and rape me, and hours later the police will find my lifeless naked body bent at odd angles on the floor, next to the big round zebra-skin bed.

Or maybe he will just ask me to strangle him a little with my panties while he gets off on their beautiful aroma.

Or maybe none of these things will happen except in my mind and yours, because, like I told you, together we’re making magic, at least for the time being.

Are you still there? I just reread what I wrote about the otaku salaryman, and I want to apologize. That was nasty. That was not a nice way to start.

You probably don’t think nuns are all that fascinating, but my great-grandmother is, and not in a kinky way at all. I am sure there are lots of kinky nuns out there . . . well, maybe not so many kinky nuns, but kinky priests, for sure, kinky priests are everywhere . . . but my diary will not concern itself with them or their freaky behaviors.

This diary will tell the real life story of my great-grandmother Yasutani Jiko. She was a nun and a novelist and New Woman7 of the Taisho era.8 She was also an anarchist and a feminist who had plenty of lovers, both males and females, but she was never kinky or nasty. And even though I may end up mentioning some of her love affairs, everything I write will be historically true and empowering to women, and not a lot of foolish geisha crap. So if kinky nasty things are your pleasure, please close this book and give it to your wife or co-worker and save yourself a lot of time and trouble.

I think it’s important to have clearly defined goals in life, don’t you? Especially if you don’t have a lot of life left. Because if you don’t have clear goals, you might run out of time, and when the day comes, you’ll find yourself standing on the parapet of a tall building, or sitting on your bed with a bottle of pills in your hand, thinking, Shit! I blew it. If only I’d set clearer goals for myself!

The truth is that very soon I’m going to graduate from time, or maybe I shouldn’t say graduate because that makes it sound as if I’ve actually met my goals and deserve to move on, when the fact is that I just turned sixteen and I’ve accomplished nothing at all. Zilch. Nada. Do I sound pathetic? I don’t mean to. I just want to be accurate. Maybe instead of graduate, I should say I’m going to drop out of time. Drop out. Time out. Exit my existence. I’m counting the moments. One . . . Two . . . Three . . . Four . . . Hey, I know! Let’s count the moments together!9

4. Otaku – obsessive fan or fanatic, a computer geek, a nerd

7. New Woman—a term used in Japan in the early 1900s to describe progressive, educated women who rejected the limitations of traditional gender-assigned roles.

8. Taishō era, 1912–1926, named for the Taishō emperor, also called Taishō Democracy; a short-lived period of social and political liberalization, which ended with the right-wing military takeover that led to World War II.

9. For more thoughts on Zen moments, see Appendix A.

From: A Tale for the Time Being by Ruth Ozeki Copyright © Ruth Ozeki Lounsbury, 2013. Reprinted by permission of Penguin Group (Canada), a Division of Pearson Canada Inc.