Women's arguments can get intense. But what is it that turns one physical? Researchers have pinpointed the body language that sets people off. 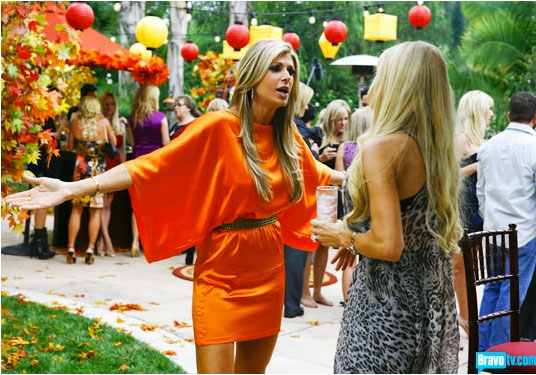 Alexis from the Real Housewives of Orange County gets into it at a backyard soiree (Photo courtesy BravoTV).

Despite spending untold hours of my life watching housewives from New York to New Jersey to Beverly Hills to Orange County, even after years of exposure to their conduct unbecoming, I still can’t get used to all that fighting.

Sniping, tattling, hurling insults — these are women who wear stilettos like weaponry. Dressed to kill, at best, they love to stir the pot and at worst, look for any opportunity to break the pot over the head of their nearest rival.

If you’re like me, you probably can’t even recall the last time you had an unpleasant exchange with a friend, let alone a borderline fistfight. (Siblings don’t count.)

Obviously, there are people for whom fighting, verbal and physical, is a way of life and even a perverse source of pleasure, just as watching those people fight is a slightly unbecoming vicarious thrill for the rest of us.

A couple of criminologists at the University of Toledo recently completed research into how we signal each other that the overheated exchange between us about, say, whether Huma Abedin should stand by her man, is about to turn physical.

According to an article in Pacific Standard, when your verbal sparring partner gets in your face, or assumes a fighter’s stance, you should make plans to fight, or take flight, because it’s game on.

One of the strongest nonverbal cues suggesting impending violence occurs when the person with whom you’re arguing turns his or her head and surveys the area.

The researchers relied on responses from a group of men and women, all under 30 and racially diverse, to discern the universal danger signs, which may also include tensing jaws, hands in pockets, yelling, pacing and removing clothes.

If you want to cool things off, try putting your hands on your hips and deflecting your gaze, both signs of submission — unless you happen to be a housewife, in which case, hands on hips double as both a vanity statement and a declaration of war.

Do you watch any reality TV shows where women often fight? Tell us what you think of it in the comment section below.