Are we going to have to get separate bedrooms?

I have about 15 bruises on my left shin. All of them are from Mark....in his sleep. I tried to sleep next to him but eventually, not being able to get any shut-eye forced me to give up and sleep in the guest bedroom. 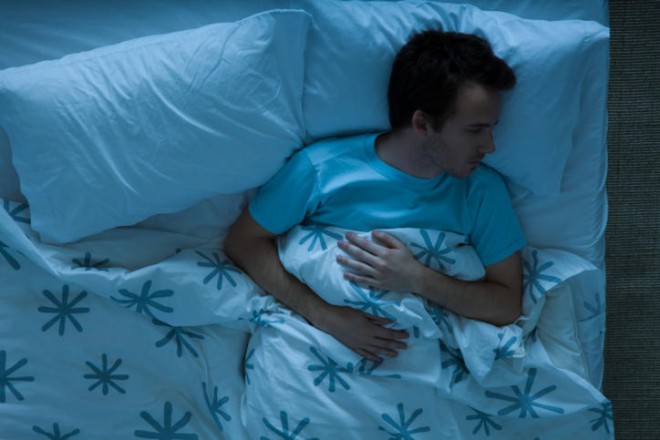 It’s undeniable that when Mark returned from Afghanistan, he came home stressed. After months of being on the go 24/7, it was hard for him to wind down and relax, even when he was sleeping at night. Although it’s been a month since his return, he’s still adjusting to being at home. The changes in him have been both physical and behavioural.

I can tell you that one thing you crave when your spouse is deployed is touch. You go so long without it that you just miss the little things—holding hands or a kiss before bed. Those small touches that make up your day are so easy to take for granted. And most of all, after a long day at work, we all look forward to bedtime, don’t we? There’s nothing better than pulling that duvet up around your cheeks and snuggling in. Better yet, snuggling into the arms of someone you love. There could be no greater thing. Except in my household.

In Mark’s forty nights at home, we have only slept next to each other for five of those nights. The remaining nights has had either one of us in the guest bedroom. I realize this sounds bizarre but rest assured, that it’s not for lack of wanting. Mark’s body is so tense that once he falls asleep, his legs move non-stop. He kicks, flails, and quite literally bruises my shins. I watch his troubled sleeping face and worry that whatever he his dealing with in his sleep are remnants of what he feels during the day. And when I gently wake him up, he mumbles something about fighting the Taliban or killing the monster from Predator.

For the first two weeks, I tried to sleep next to him but eventually, not being able to get any shut-eye forced me to give up and sleep in the guest bedroom. After all, the poor man has spent months overseas exhausting himself and deserves some rest. But now, we’re so frustrated because we’re still sleeping endless nights apart. I would give anything for a solid week of slumber next to the man I love.

We’ve seen a doctor, but the doctor is reluctant to put Mark on heavy medication for a seemingly unnecessary reason. And every night, the twitching gets a little less intense and I hope that it is a sign that Mark’s body is slowing relaxing and coming back to me. But in the meantime, it sort of feels like I have a really nice roommate. Not a spouse.