Alanis Morissette's all grown up

The Canadian rock star has transformed herself from a pop princess to a smart, balanced and thoughtful woman who loves to have fun 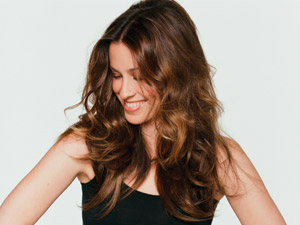 Alanis Morissette and I are alone in the windowless back room of a Santa Monica photo studio. The air conditioning is in overdrive (no one can figure out how to turn it down) and she’s shivering in a chunky brown cardigan over a T-shirt and jeans, warming her hands with a mug of hot tea. Despite the decidedly unglamorous surroundings, the frigid temperature and the fact that the Ottawa-born singer has spent a long day posing for Chatelaine‘s cover shoot, a diva attitude is nowhere in sight.

In our conversation about her seventh album, Flavors of Entanglement, expected out this spring, Morissette is good-natured and prone to laughing in quick eruptions. Making small talk, I mention her twin brother, Wade, a yoga instructor with a budding music career, and she beams with pride. And when I ask, “Which one of you is the ‘evil twin’?” she cackles with delight. “It’s a legitimate question,” she says. (The answer? “It depends when you catch us.”)

For a musician often regarded as earnest, Morissette’s sense of humour is a revelation. For every good Canadian knows the story of Alanis Morissette. Her unlikely transformation from mall-rat pop princess into music’s patron saint of agonized relationships into spiritual junkie is as familiar as “O Canada.” But, like the national anthem’s second verse, Morissette has a whole other unknown refrain.

Sure, when we want to dance out our revenge fantasies on no-good ex-boyfriends, we’ll crank the volume on “You Oughta Know.” And when we’re feeling more meditative, we’ll groove to the feel-good “Thank U.” But we neverthink of turning to Morissette for a laugh, and maybe it’s time to start. A great beginning is her version of “My Humps.”

The original “My Humps” video by The Black Eyed Peas featured the band’s sole female member, a whored-up and blinged-out Fergie, flaunting her “lovely lady lumps” and cooing “they keep givin’, so I keep on takin’,” all the while strategically shaking her booty to illustrate her argument. It was, simply put, one of the ickiest videos of the last few years.

Then, in a one-day shoot in her garage last winter, Morissette and her friends recreated the video, but with a few notable changes. The throbbing drums and synthesizer were replaced with an acoustic piano. The tempo was slowed to that of a funeral dirge. And, in Morissette’s characteristically anguished vocals, lyrics that had been merely pointlessly demeaning became grotesquely obscene – and gut-bustingly funny.

“Comedy and music are my two favourite ways to make social commentary,” she says, “and when you can combine them both, it’s even better. I just loved presenting the song to people in a way that asked, ‘Have you heard these lyrics?’ And, I hate to say it, but after singing [them], I realized some of them were awesome. In the game of gender differences, some of those lyrics were dead true.”

The video was a semi-private joke, posted on Morissette’s website, alanis.com, for her dedicated fans. Then someone uploaded it to YouTube, where it picked up five million hits in a matter of days. Initially, she refused to talk about her pet project, showing a lack of interest in spotlight hogging that bumped her already elevated street cred up another notch. Even Fergie saw the humour: She sent Morissette a cake shaped like a derriÃ¨re with a note that read, “Alanis, you’re a genius. Love, Fergie.”

It turns out that Morissette is a satirical mastermind as well as a feminist. So while every good Canadian knows her story, they’re going to have to rewrite the ending to make room for her latest incarnation: that of a smart, thoughtful, balanced woman who likes to have fun. Someone like us, or at least who we hope to be. Except for the international-superstar part.

Perhaps the first real clue about Morissette’s other persona was the grace with which she handled the February 2007 breakup of her engagement to her beau of four years, a fellow Canuck, Ryan Reynolds. At the time, their publicists issued the typical Hollywood statement announcing the end of their relationship, their continued mutual affection and their desire for privacy. When I ask her about the news that Reynolds, the star of Smokin’ Aces, Blade: Trinity and Van Wilder, is heavily involved with the bombshell actress Scarlett Johansson, her response is heartfelt: “I wish nothing but absolute joy for him. I want him to be as happy as he wants to be.” As for her own dating life, Morissette will only offer an impish grin and say, “I’m having a lot of fun.

“Down the road I would love to have a full-blown family, but I am nowhere near ready to be married,” says Morissette, who turns 34 on June 1. “I have a ways to go before I am emotionally mature enough to sustain a healthy connection. I’m too much of a kid still, but I’m growing up. And I mean that in a positive way.”

Still, Morissette has always been mature enough not to kiss and tell, just kiss and sing, albeit without naming names. (She’s never confirmed nor denied the rumour that the antagonist in “You Oughta Know” is her one-time flame the former Full House sitcom star Dave Coulier.) But she does admit that her method of creating music always has been deeply rooted in her own experience. She calls Flavors of Entanglement – her follow-up to the 2005 release of both a greatest-hits collection and a Jagged Little Pill acoustic remix – a snapshot of her life in the past year. “The album chronologizes me and my personal relationships; it’shard for me not to write about them,” she says. “It captures the rock-bottom moments, the phoenix-rising moments, the insights that are derived from excruciating pain. The overarching theme is growing up: I might be in a 33-year-old woman’s body, but there are parts of me that are still seven years old. It’s about taking a little more responsibility, even though that sounds decidedly unsexy and not fun.”

Of course, Morissette’s maturity may work for her personally, but it remains to be seen if her newly embraced wisdom will work for her music. More than a decade ago, Jagged Little Pill’s sales scorched the charts – a record-setting 30 million copies worldwide – in large part because of the single “You Oughta Know,” with its hissing lyrics: “Every time I scratch my nails down someone else’s back I hope you feel it.” But “Not as We,” a likely single from the new album, offers a more poignant view of heartache: “Step one, step one, I’m barely making sense; for now I’m faking it till I’m pseudo making it. From scratch, begin again, but this time I as I, not as we.”

Sigsworth, who has worked with Bjork, Seal and Madonna, also promises that Morissette’s sound has changed. “The album is really a hybrid, like fusion cuisine, and came about very organically. It’s not going to shock people, but I hope it will surprise people.”

More surprises: Cynical minds may have mocked Morissette’s soul-searching journey to India post-Jagged Little Pill, but in conversation her spirituality is endearing. On her arms, Morissette tattooed the words breathe and gentle, close and permanent reminders of how to live her life. She’s also exploring ways to do charitable service, most recently by visiting cyclone-ravaged Fiji this past January to hand out medical supplies.

“I don’t feel like I’m a human being having a spiritual experience; I feel like a spiritual being having a human experience,” Morissette says. “It’s not something that I choose to do; it chooses to do me. It shows up in all kinds of forms: in me being silent, or being meditative, although I am a shitty meditator. It shows up in me spending time alone, communing in nature, dancing or when I’m onstage.”

She feels this sense of spirituality when she’s engaged in any kind of performance, which explains her extensive and varied body of work. She may not have toured since 2005, but you’ll have noticed her popping up in the television series Degrassi: The Next Generation, Nip/Tuck and Sex and the City, as well as the movies Dogma and De-Lovely.

She recently wrapped the film adaptation of Radio Free Albemuth, based on the story by the sci-fi master Philip K. Dick, in which she plays a leading role. She’s also written a manuscript for a non-fiction book, which she describes as a collection of the “so-called wisdoms I’ve accrued over the years from my experiences.” Currently, she’s also busy shuttling around North America to open for Matchbox Twenty as a warm-up concert tour for her more extensive headlining stint this fall.

Ask her what makes her happy, and she rhymes off a list: “Intimacy, connection, self-care, art, expressing, moving, nature, laughing, comedy – those are my favourite things.” Community counts highly, too. She divides most of her time between houses in Malibu and Los Angeles (with a pied-à-terre in Ottawa), living with her aunt, a dear childhood friend, her two dogs and “a few people who come and go.”

“I don’t know if there will be a day when I don’t have a village in my living environment,” she says. “That’s where I thrive the most.”

After 20 years in show business, her life plans are getting mellower. “I’ve realized so many sweet dreams already, travel and that kind of thing. My goals aremuch smaller, in the minutiae department: I want to keep my space minimalist, spend more time in nature.”

“This is about as happy as I think I’ve ever been in my whole life. So much has to do with being able to take care of myself. Before I was looking outward. Now I know there is no way anyone else can parent me or love me in the way that I have to do. There is a peace that comes with that for me.”