A little getaway to another part of our beautiful country taught me that fear does not control me. This past week, I took a trip out to Canmore and Calgary, allowing Mark a little space in our house and some time to himself, which is vital after months in Afghanistan where he never had a moment to himself. 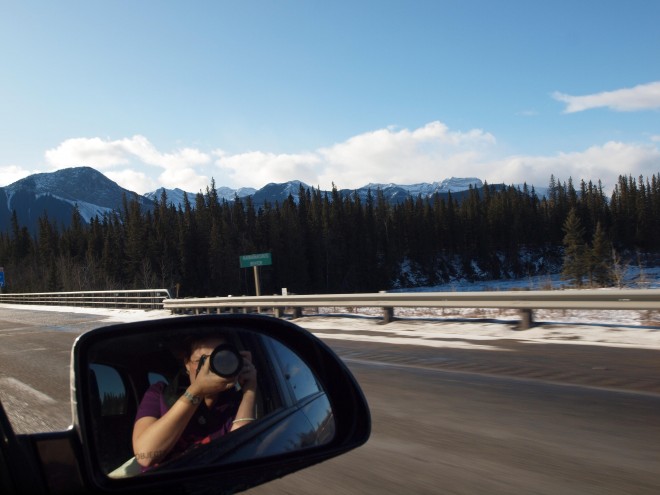 I love to travel. And although I love seeing the world, my real passion is seeing our own beautiful country. Sometimes, when you live in one place long enough, it’s easy to forget that Canada is so multifaceted.

So this past week, I took a trip out to Canmore and Calgary, allowing Mark a little space in our house and some time to himself, which is vital after months in Afghanistan where he never had a moment to himself. All in all, leaving for a few days was great for both of us as we adjust to life together once again.

While I find all of the intricacies of our country to be stunning, it’s hard not to be humbled by the Rockies, isn’t it? Driving through, it was easy to look upon life in a different way. I suddenly felt like such a small cog in a series of moving parts.

So inevitably, it was hard not to think about how this year is about to bring so much change for me. A new job. A new city. A new life. And it’s been so easy to have moments of panic when I think of all these changes. I’ve said before that the military is a whole lifestyle that you get used to living. Now, my likely medical release is looming and I should hear any day about my fate. And so, I’m allowing doubt to creep in. At night, I lay awake, thinking of how nervous I am to be a civilian.

Monday morning, I woke up in my hotel in Canmore and slowly peeled back the curtains. I looked out at the Three Sisters Mountains, just lightly tinted by the sun that hadn’t yet risen over their peaks, and I was overwhelmed with a sense of calm and a realization that I’ve spent too many years of my life controlled by fear. Previously, the mountains had made me feel unworthy in their majestic presence. The new year is as good a time as any to change that.

On the flight home, I had an interesting conversation with a lovely man named Chris and I was explaining all of this to him. And he said to me, “But you are a military woman! Fear does not own you!” And you know what? He was right. I finished basic training when no one thought I could. I’ve dealt with surgery after surgery for a painful broken leg. Almost a decade ago, I signed on that dotted line, promising to give the country my life if it was asked of me, and I did that at such a tender young age. As a matter a fact, I’ve been pretty darn brave.

So this year, anytime I feel nervous about my future, I’ll think of all of the things the military has taught me, and all of the challenges I’ve overcome.

I guess I owe some thanks to the mountains of Canmore. They reminded me that even the smallest cog can make the whole wheel spin.