A date with the Property Brothers: 'Jon has always been the romantic'

Jonathan and Drew Scott talk about awkward flirting, their country music careers and the importance of cleanliness in a romantic partner. 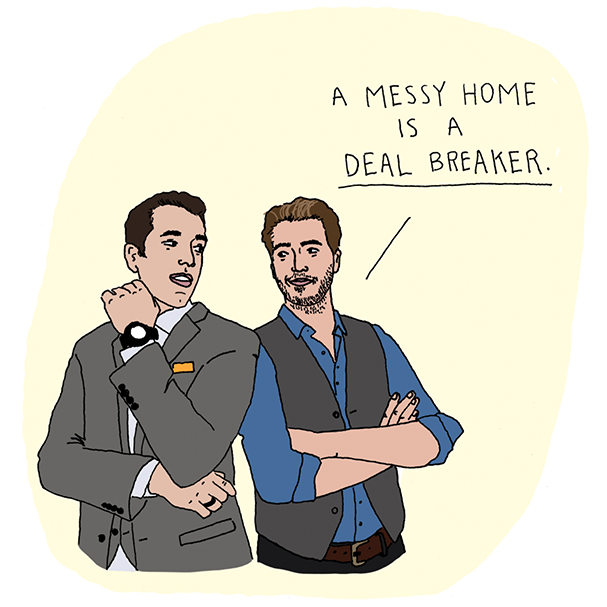 This is the first time I’ve been on a date with two people. How about you two?
Jonathan: We’ve done double dates in the past. These days, I generally try to keep things private because if I tell Drew that I’m going on a date, he and [his girlfriend] Linda will just show up. I’ll look over and they’ll be sitting at a table behind me with menus covering their faces, trying to listen in.
Drew: When we were in high school, Jonathan would always try to embarrass me in front of girls, so I consider it my duty to pay him back.

Which twin is the more natural Casanova?
D: Jon has always been the romantic. He started dating before I did. I was more awkward and nervous in front of girls in high school.
J: Watching Drew hit on girls was like watching a Ben Stiller movie — so awkward.
D: Whereas Jonathan was like A Night at the Roxbury. He would just go out and be like “Sup,” “Sup,” “Sup” to all these different girls.

Have you ever competed for the same woman? Before today, I mean.
J: There was once a girl at an event I thought was cute. I mentioned to Drew that I wanted to talk to her. She ended up coming over and Drew chatted her up. Sure enough, they started going out. It didn’t last long, but it was the principle.
D: I don’t believe in calling dibs.
J: I wasn’t calling dibs! I was saying I was going to go talk to that person.

You guys have great taste in decor. Is that a must for a potential partner?
D: I don’t care about style, but I am a total clean freak, so a messy home is a deal breaker. I had one girlfriend who never wanted to go back to her place. When we finally did, it turned out that she was sleeping on her couch because her bedroom was so messy. That is a prime example of someone I don’t want to be around.
J: Cleanliness is important to me, too. I like to see that somebody takes care of their living environment.

What would a visit to your shared home in Vegas tell me about you two?
J: You’d get to see my nerdy side. We have a medieval weapons collection.
D: I’m only home a few weeks a year, but my domain is outside. I have a basketball court, a putting green.

And a waterslide, if the rumours are true.
J: Drew fought me on it. He said I’d never use it, but now he admits it’s awesome.
D: It is awesome. It comes off the second storey of the house. Everyone who comes to the house — it’s the one thing they talk about.

Your book, Dream Home, is packed with tips on buying, selling, decorating. What’s the best one?
D: Take the time to educate yourself, whether you’re house hunting, deciding on materials or looking for a lender. When homeowners jump into something blind, that’s always when they make mistakes.
J: Another big one is that you don’t have to spend money to improve your space. Changing the way your furniture is laid out can freshen up a room.

Property Brothers has been called the crack cocaine of cable. Do you take that as a compliment?
J: We take that as a huge compliment. People love our work and I think they love the brotherly banter. We take our work seriously, but not ourselves.

You guys recently released a couple of country music singles. Apparently you don’t have enough women swooning?
D: Growing up, we spent every other evening around a campfire singing songs with our parents, so we wanted to pay tribute to that. Our single “Hold On” charted in the 20s on Billboard last week.